A complex series of upper-level weather systems (closed lows and troughs) moved across the contiguous United States. They moved within a long-wave pattern consisting of a ridge over the West Coast and a trough off the Atlantic Coast. Most of the weather systems traveled across the northern half of the country, but one got cut off and “stuck” around the Texas-Mexico border, creating a long-wave trough over New Mexico. The surface lows and fronts associated with these systems were generally dry as they crossed the West, although the Rockies of Wyoming and Colorado to the Plains of Nebraska had above-normal precipitation. The fronts and surface lows picked up Gulf of Mexico moisture to spread above-normal precipitation across much of New Mexico and Texas, then northeastward into the Mid-Mississippi Valley, Ohio Valley, and Northeast.

In addition to most of the West, most of the northern  Plains to Upper Mississippi Valley, Southeast, and Mid-Atlantic states were drier than normal this week. The cutoff upper-level low kept parts of Arizona, New Mexico, and Texas cooler than normal, while most of the rest of the contiguous U.S. averaged near to warmer than normal for the week beneath the long-wave ridge. Abundant rain fell across several drought areas, so drought or abnormal dryness contracted across much of the southern Plains and parts of the central Rockies to central Plains, Midwest, Northeast, and Southeast. But drought or abnormal dryness expanded or intensified across parts of the Far West, central and southern Plains, Mid-Mississippi  Valley, and Northeast. Contraction exceeded expansion, so the moderate to exceptional drought area shrank this week.

Abnormal dryness and drought are currently affecting over 163 million people across the United States including Puerto Rico—about 52.6% of the population. 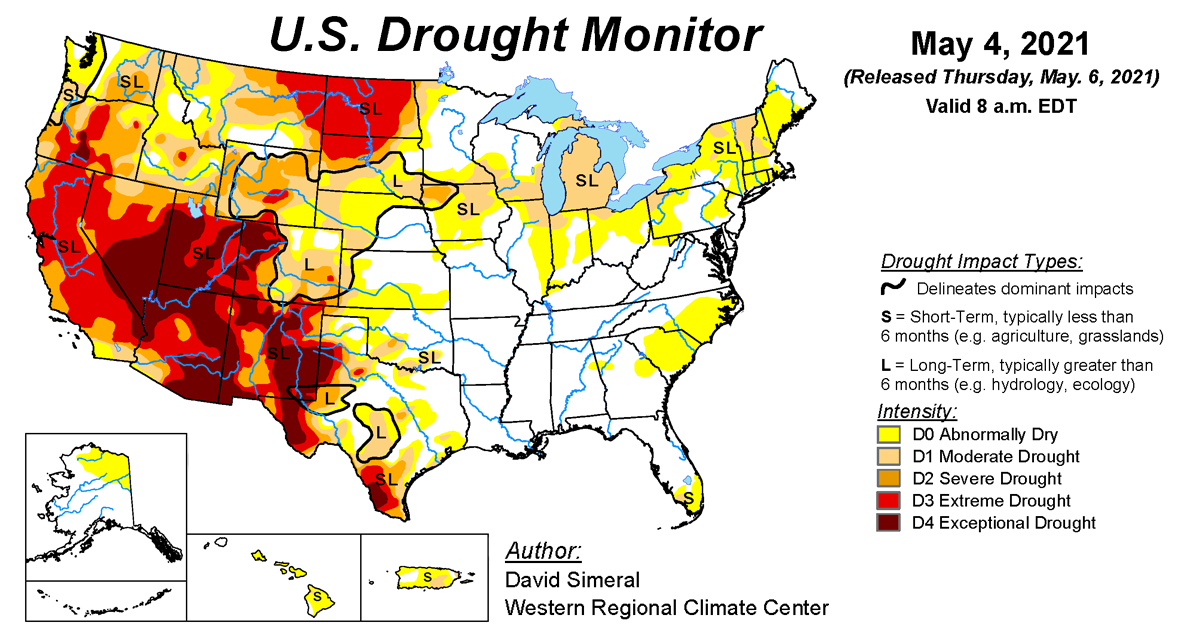 According to the March 28, 2017, U.S. Drought Monitor, moderate to extreme drought covers 14.2% of the contiguous United States