The jet stream flow was mostly zonal with several embedded Pacific weather systems, also known as shortwave troughs. The troughs brought Pacific cold fronts with them that dropped precipitation in some areas as they traversed the country. These areas included northern California and the Pacific Northwest, parts of the Rockies, the central  Plains to Ohio Valley, and the Northeast. But precipitation amounts  were above normal in only a  few  areas, including the Sierra Nevada and parts of the Pacific Northwest, a couple strips from the central Plains to Ohio Valley, and a narrow strip in New England. The rest of the contiguous United States received little to no precipitation.

Temperatures were warmer than normal across most of the country, especially from the Southwest to northern Plains, and near to cooler than normal in parts of the Pacific Northwest and along the  East Coast. Drought or abnormally dry conditions improved in a few areas in the Northwest, Midwest, and New England. However, continued dryness expanded or intensified drought or abnormally dry conditions across much of the Southwest to southern and central Plains, Southeast, and parts of the Midwest. Drought expansion was more than contraction, so the overall U.S. drought footprint increased this week.

Abnormal dryness and drought are currently affecting over 139  million people across the United States including Puerto Rico—about 44.9% of the population. 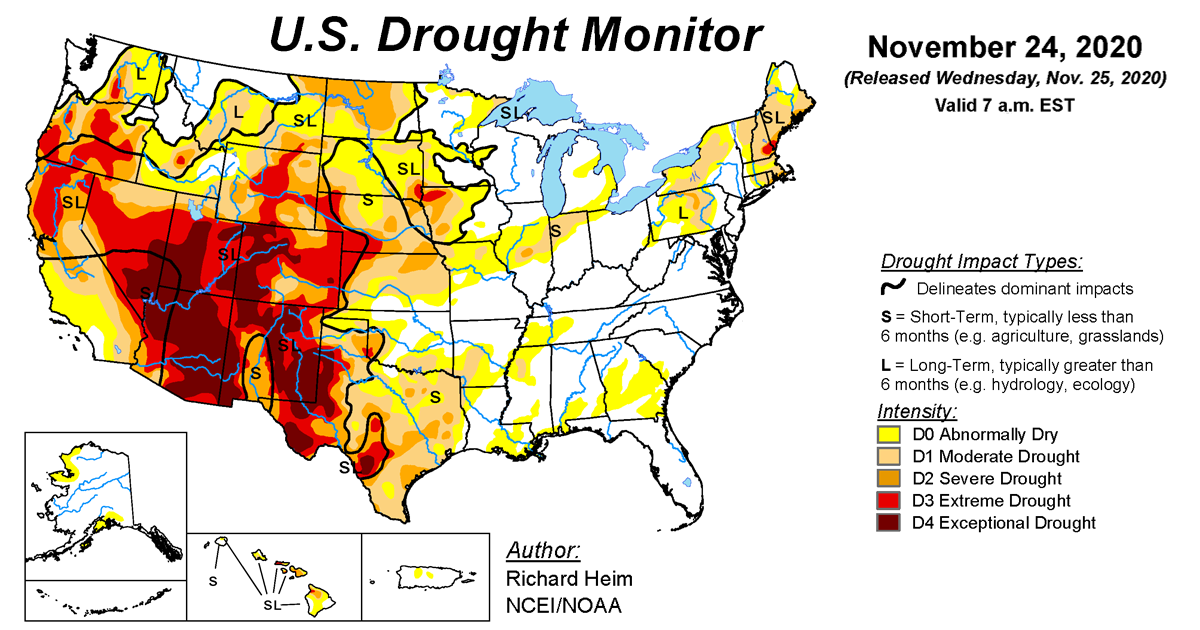 According to the January 7, 2020, U.S. Drought Monitor, moderate to exceptional drought covers 9.5% of the United States

According to the September 1, 2020, U.S. Drought Monitor, moderate to exceptional drought covers 33.3% of the United States