According to the October 2, 2018, U.S. Drought Monitor, moderate to exceptional drought covers 24.6% of the United States, a decrease from last week’s 25.1%. Extreme and exceptional drought—the worst categories—also contracted to cover 6.1% of the nation, down from 6.3% last week.

Four circulation features dominated the weather over the contiguous United States this U.S. Drought Monitor week. The first was upper-level ridging across the eastern North Pacific and along the eastern U.S. coast, with the eastern ridge coupled with an extension of the North Pacific High across the southern and eastern Lower 48. The ridging kept temperatures warmer than normal across the West, East, and southern tier states.

The second feature was an upper-level trough over central Canada that extended into the north central contiguous United States. The trough sent waves of cool Canadian air into the United States east of the Rockies, and these cold fronts brought cooler-than-normal temperatures to the northern and central Plains to Great Lakes. A southerly flow funneled Gulf of Mexico moisture northward which collided with the cold fronts to produce above-normal precipitation from the western and central Gulf Coast, up the Appalachian chain, to the Northeast. The fronts also gave parts of Montana and the Upper Midwest above-normal precipitation for the week. The ridge in the West, and the northwesterly flow from the Pacific Northwest to central Plains associated with the trough, kept precipitation below normal for much of the West, Plains, and Midwest.

The third circulation feature was upper-level lows undercutting the ridge over the eastern North Pacific. These lows began to bring precipitation to the California Coast as the week ended. But more importantly, they created a pressure differential that pulled Hurricane Rosa, the fourth circulation feature, northward into northwest Mexico. Moisture from the remnants of Rosa was spread into the drought-ravaged U.S. Southwest by the upper-level lows, resulting in above-normal precipitation across much of Arizona by week’s end.

The areas with above-normal precipitation saw drought reduction, especially in southern Arizona, the Plains, and parts of Alabama, the Great Lakes, and Northeast. Drought and abnormal dryness expanded in parts of the Southeast, which were drier than normal beneath the upper-level ridge and North Atlantic High, and parts of the southern High Plains and Mid-Mississippi Valley.

Abnormal dryness and drought are currently affecting over 92 million people across the United States—about 29.8% of the country’s population. 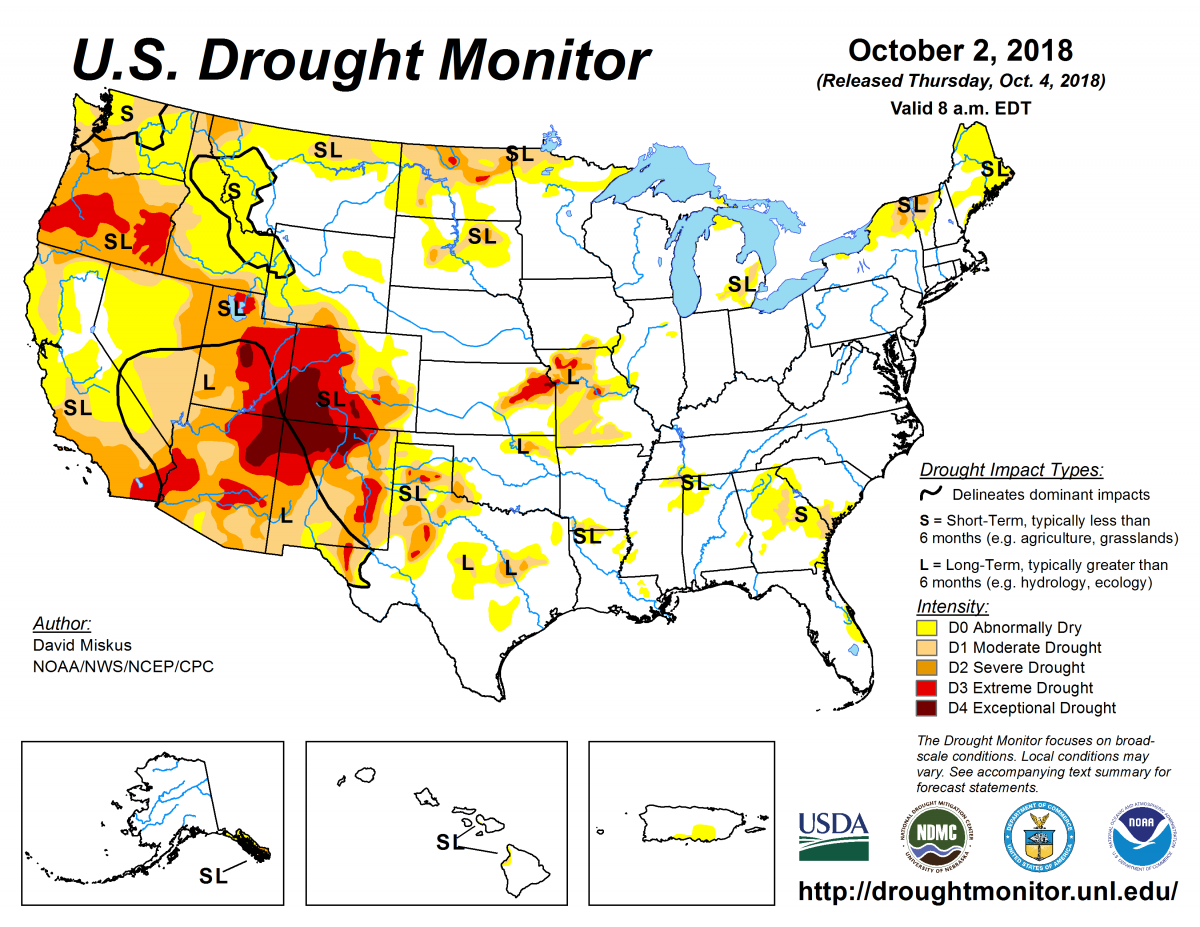 According to the March 14, 2017, U.S. Drought Monitor, moderate to extreme drought covers 15.2% of the contiguous United States

According to the March 21, 2017, U.S. Drought Monitor, moderate to extreme drought covers 16.0% of the contiguous United States