According to the September 18, 2018, U.S. Drought Monitor, moderate to exceptional drought covers 26.2% of the United States, an increase from last week’s 25.8%. Extreme and exceptional drought—the worst categories—also expanded to cover 6.0% of the nation, up from 5.8% last week.

This overarching circulation pattern resulted in a few areas of above-normal precipitation in the Pacific Northwest and northern Plains, but most of the West, central Plains, Deep South, and Midwest to Great Lakes were drier than normal for the week. The pattern was complicated in Texas and along the East Coast by tropical systems.

A slow-moving tropical disturbance gave southern Texas above-normal rainfall when it ran into a stalled front along the Texas Coast. Further east, Hurricane Florence was guided by easterly trade winds into the Carolina Coast. It stalled out over the Carolinas when the steering currents weakened, inundating parts of these two states with flooding rains, causing widespread property damage, and leading to several deaths. A southerly flow on the west end of the North Atlantic High eventually pushed the remnants of Florence north into the mid-latitude westerlies, where the jet stream flow pushed it across the Northeast and back out to sea. Florence left above-normal precipitation in its wake from the Carolinas and central Appalachians to southern New England. And, half a world away, Hawaii experienced another tropical system this month when Tropical Storm Olivia spread above-normal rainfall across most of the islands.

The end result of these weather systems was contraction of drought and abnormal dryness in Hawaii, Texas, and the Carolinas, but expansion or intensification in parts of the West and Plains, and in other parts of the Southeast.

Abnormal dryness and drought are currently affecting over 102 million people across the United States—about 33.0% of the country’s population. 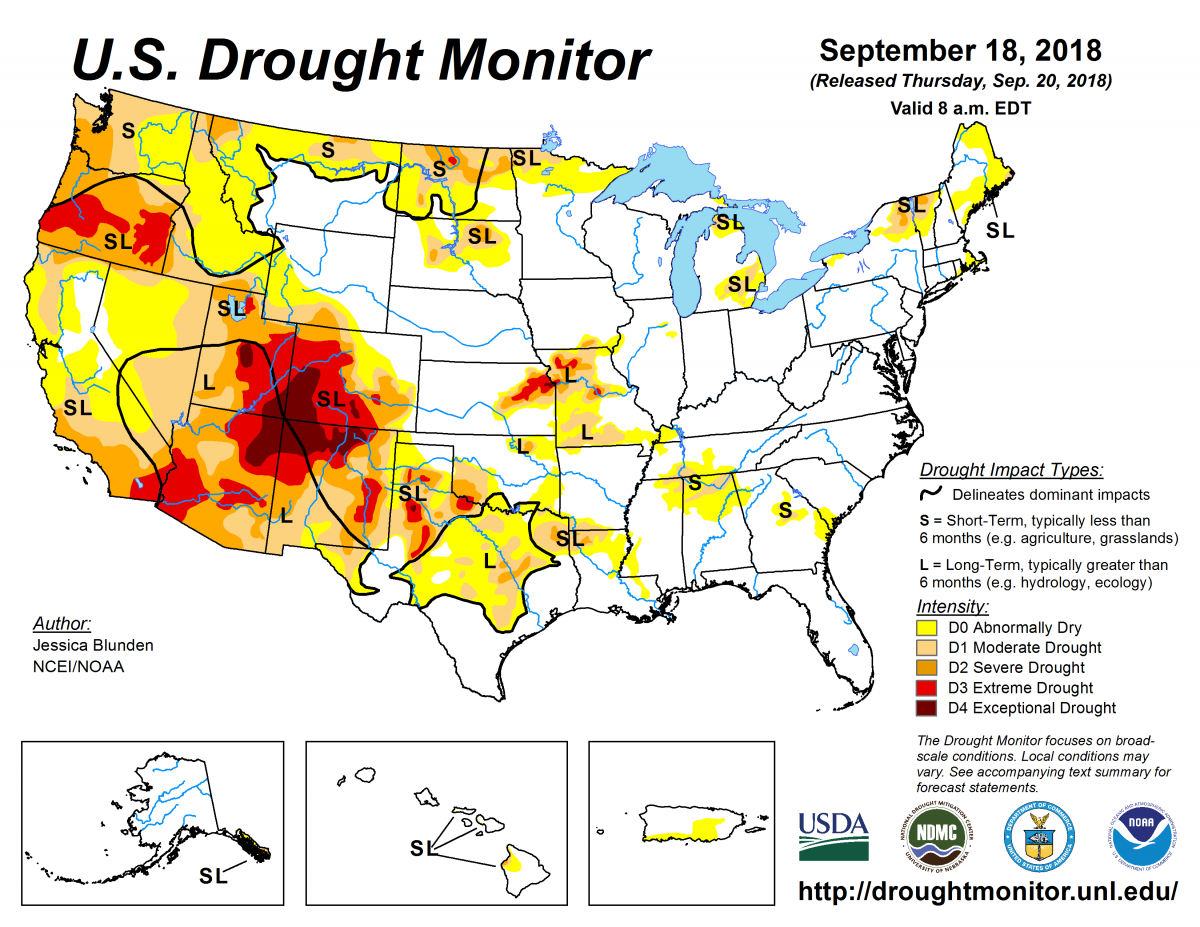 According to the March 10 U.S. Drought Monitor, moderate to extreme drought covers 10.8% of the United States including Puerto Rico.

According to the January 26 U.S. Drought Monitor, moderate to exceptional drought covers 38.5% of the United States including Puerto Rico.