According to the September 25, 2018, U.S. Drought Monitor, moderate to exceptional drought covers 25.1% of the United States, a decrease from last week’s 26.2%. However, extreme and exceptional drought—the worst categories—expanded to cover 6.3% of the nation, up from 6.0% last week.

Like last week, the large-scale weather pattern over the contiguous United States this U.S. Drought Monitor week was controlled by subtropical high pressure across the southern and eastern states with an upper-level trough over the Far West. Weather systems (called “short-wave troughs”) moved in the jet stream flow across the northern states, dragging cold fronts with them. Some of the fronts stalled out across the northern Plains or Southeast when they ran into the subtropical high pressure.

Temperatures were well above normal beneath the subtropical high pressure, especially from the Mississippi River to the Atlantic and Gulf of Mexico coasts. And, temperatures were cooler than normal in the Pacific Northwest to northern High Plains and in northern parts of New England.

This weather pattern left much of the West drier than normal, except for moisture from the remnants of Tropical Depression 19-E that was drawn north to feed monsoon showers over parts of the Southwest. Above-normal precipitation, associated with the fronts and weather systems, fell across the northern Plains to Upper Mississippi Valley, and from the southern Plains to Mid-Atlantic region. The frontal rains missed the region from eastern Kansas to northern Illinois, and much of the coastal Southeast was kept dry by the subtropical high pressure. As a result, drought and abnormal dryness contracted from the southern Plains to western Kentucky but expanded or intensified in parts of the West and Southeast.

Abnormal dryness and drought are currently affecting over 93 million people across the United States—about 29.9% of the country’s population. 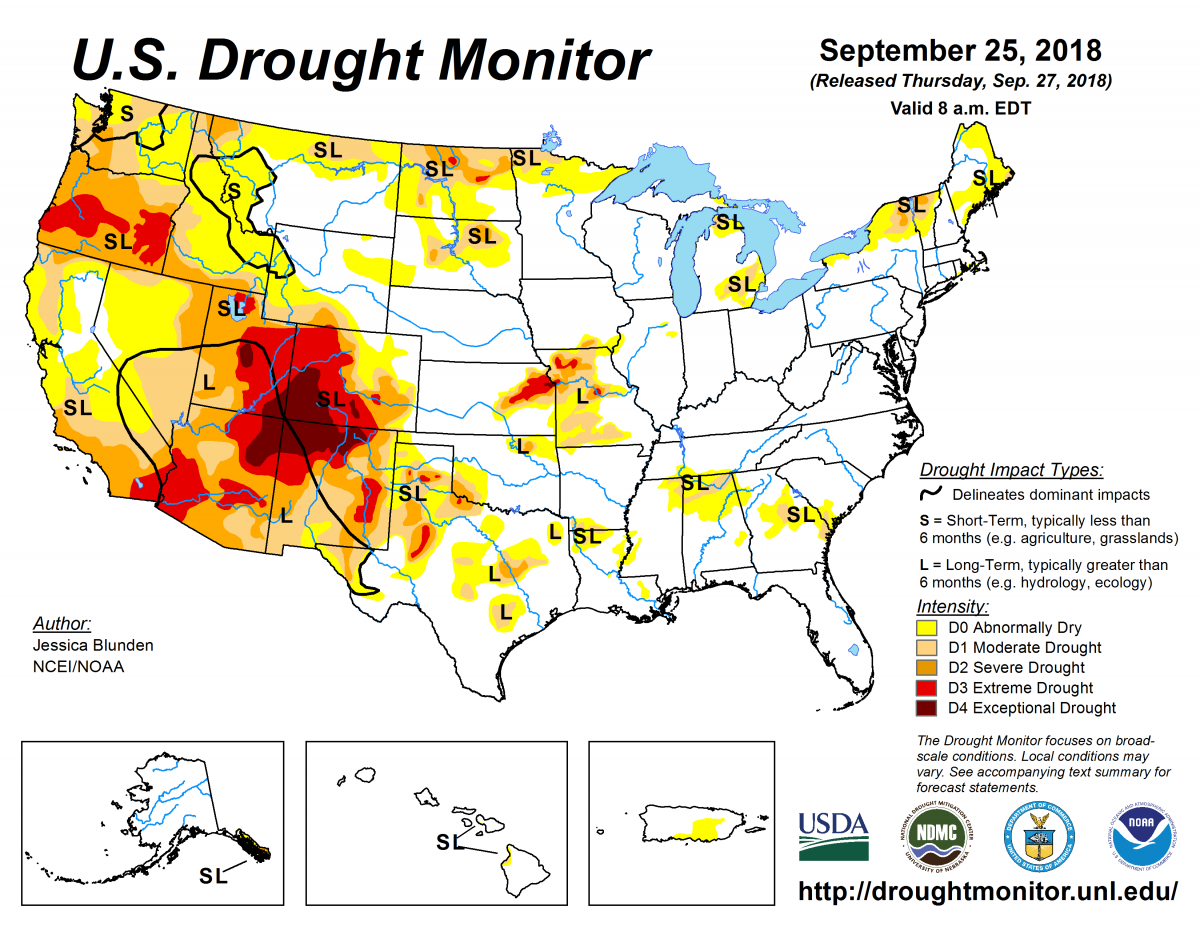 According to the October 3, 2017, U.S. Drought Monitor, moderate to exceptional drought covers 14.4% of the contiguous United

According to the November 24, 2020, U.S. Drought Monitor, moderate to exceptional drought covers 40.7% of the United States