Atmospheric circulation began with high pressure over much of the contiguous United States and the storm track along the U.S.-Canadian  border. Tropical Storm Beta cut into the high-pressure ridge as it moved from the Texas Gulf Coast across the Southeast early in the week. The week ended with a strong upper-level trough dominating the contiguous United States east of the Rockies and the upper-level ridge shifting position to become firmly entrenched across the West. The eastern trough sent a cold front plunging to the Gulf Coast and beyond as the week ended.

Pacific weather systems moving along the storm track brought clouds and precipitation to parts of the Pacific Northwest, while Beta and its remnants spread rain and clouds across eastern Texas and the Southeast. The clouds and precipitation in both cases kept temperatures near to cooler than normal. The front near the end of the week generated rain along its length from the Great Lakes to the Gulf Coast. When the weather is integrated across the week, high pressure dominated from the Southwest to Northeast. This pattern brought drier- and warmer-than-normal weather to most of the West, Great Plains, Ohio Valley, and Northeast.

Drought  or abnormal dryness contracted in parts of the  coastal Pacific Northwest, Midwest, Texas, and Southeast where beneficial rains fell. But the continued dryness expanded drought and abnormal dryness in many parts of the West, Plains, Midwest, and Northeast. Conditions were especially extreme in the West, High Plains, and Northeast. Expansion continued to far outpace contraction, with the overall U.S. drought footprint growing again this week.

Abnormal dryness and drought are currently affecting over 120  million people across the United States including Puerto Rico—about 38.7% of the population 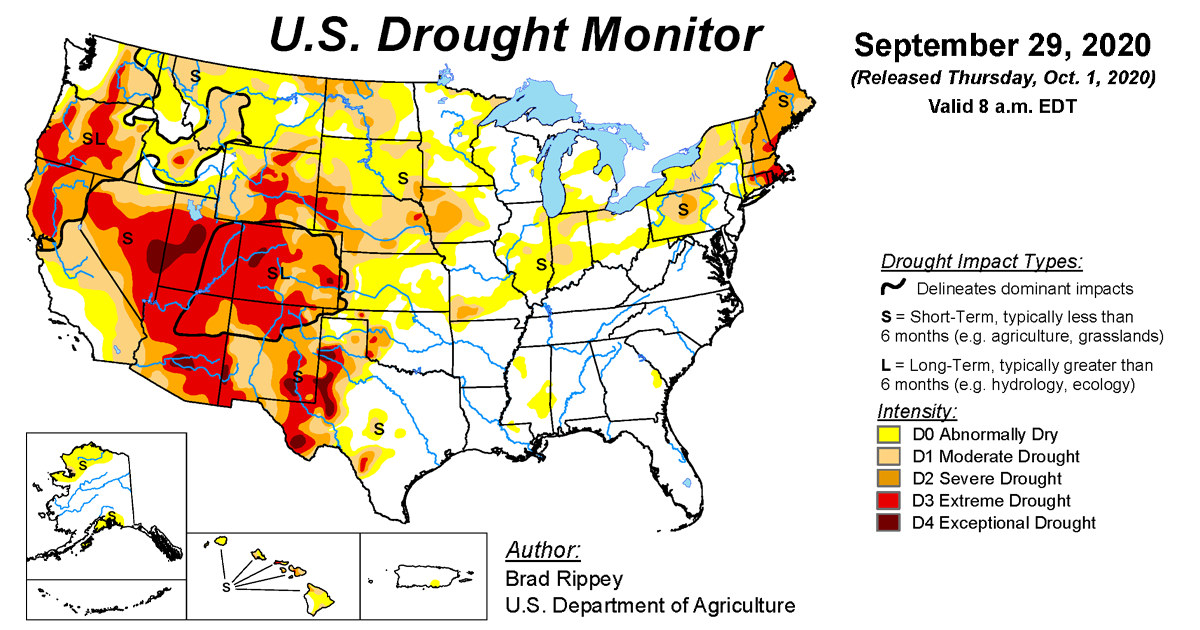 According to the August 25 U.S. Drought Monitor, moderate to exceptional drought covers 32.9% of the United States including Puerto Rico.

According to the January 31 U.S. Drought Monitor, moderate to exceptional drought covers 14.6% of the contiguous U.S.

According to the November 17 U.S. Drought Monitor, moderate to exceptional drought covers 39.0% of the United States including Puerto Rico.

According to the June 16 U.S. Drought Monitor, moderate to extreme drought covers 19.6% of the United States including Puerto Rico.