According to the September 3, 2019, U.S. Drought Monitor, moderate to extreme drought covers 11.3% of the United States including Puerto Rico, an increase from last week’s 10.5%. Coverage for the worst drought categories (extreme to exceptional drought) is the same as last week: 0.4%.

A large upper-level trough of low pressure dominated eastern North America while an upper-level high-pressure ridge held sway over western North America. This circulation pattern created a northwesterly flow across the contiguous United States and pushed dry Canadian air masses into the states east of the Rockies. The Canadian fronts penetrated into the Southeast where they stalled out before eventually migrating east. With this flow pattern, above-normal precipitation was limited mainly to the Northeast, with a few wetter-than-normal areas occurring in the Great Plains, Great Lakes, and Southeast. The Canadian fronts brought below-normal temperatures to much of the country east of the Rockies, while the upper-level ridge kept temperatures warmer than normal and precipitation drier than normal across the West to southern Plains.

Tropical Storm Erin was swept up by a cold front that pushed off the east coast early in the week, while the flow pattern over the eastern contiguous United States weakened the steering currents for Hurricane Dorian, resulting in Dorian stalling over the Bahamas near the end of the week.

The drier-than-normal week across most of the contiguous United States resulted in expansion of drought and abnormal dryness in parts of the Southwest, southern Plains, and mid-Mississippi Valley to Great Lakes. Areas that were wetter than normal saw contraction of drought or abnormal dryness—these areas included parts of the southern Plains, Southeast, and Northeast, as well as parts of Hawaii and Puerto Rico.

Abnormal dryness and drought are currently affecting over 77 million people across the United States including Puerto Rico—about 24.8% of the population. 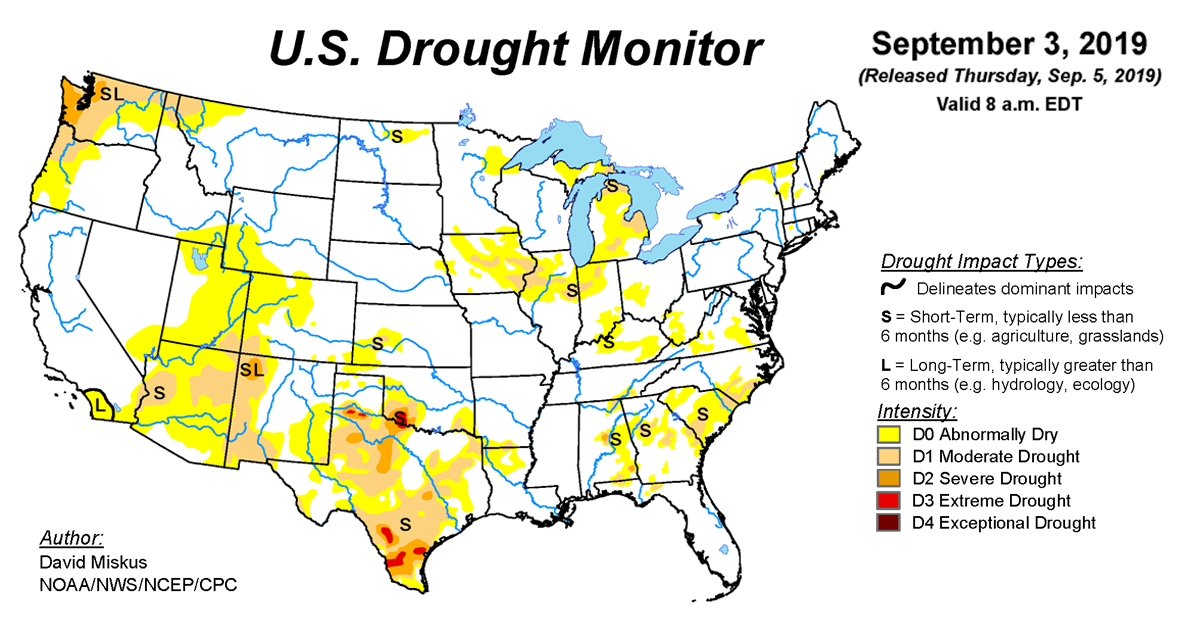