According to the September 4, 2018, U.S. Drought Monitor, moderate to exceptional drought covers 29.1% of the United States, a slight decrease from last week’s 29.2%. Extreme and exceptional drought—the worst categories—held steady for a third week, covering around 6.3% of the nation.

The upper-level circulation pattern during this U.S. Drought Monitor week consisted of weather systems moving in the westerly flow along the U.S.–Canadian border with subtropical high pressure to the south. The weather systems ran into a strong high pressure ridge over the eastern contiguous United States, which forced an upper-level trough to manifest over the central Lower 48 back to the Rockies. The resulting northwesterly flow over the West Coast resulted in cooler- and drier-than-normal weather for the western half of the country.

Surface fronts and lows lined up with the southwesterly flow over the central contiguous United States, producing above-normal precipitation from the central Plains to Great Lakes. The subtropical high pressure cell over the North Atlantic, called the Bermuda High, coupled with the upper-level high pressure ridge over the eastern Lower 48, reinforcing each other. The Bermuda High and eastern ridge kept temperatures warmer than normal from the southern Plains to East Coast, with much warmer-than-normal temperatures from the Ohio Valley to Northeast and Mid-Atlantic Coast.

Tropical disturbances, which rotated westward across the Gulf of Mexico on the southern side of the Bermuda High, included Tropical Storm Gordon. Gordon brought above-normal precipitation and below-normal temperatures to the Gulf Coast at the end of the week.

Abnormal dryness and drought are currently affecting over 118 million people across the United States—about 38.1% of the country’s population. 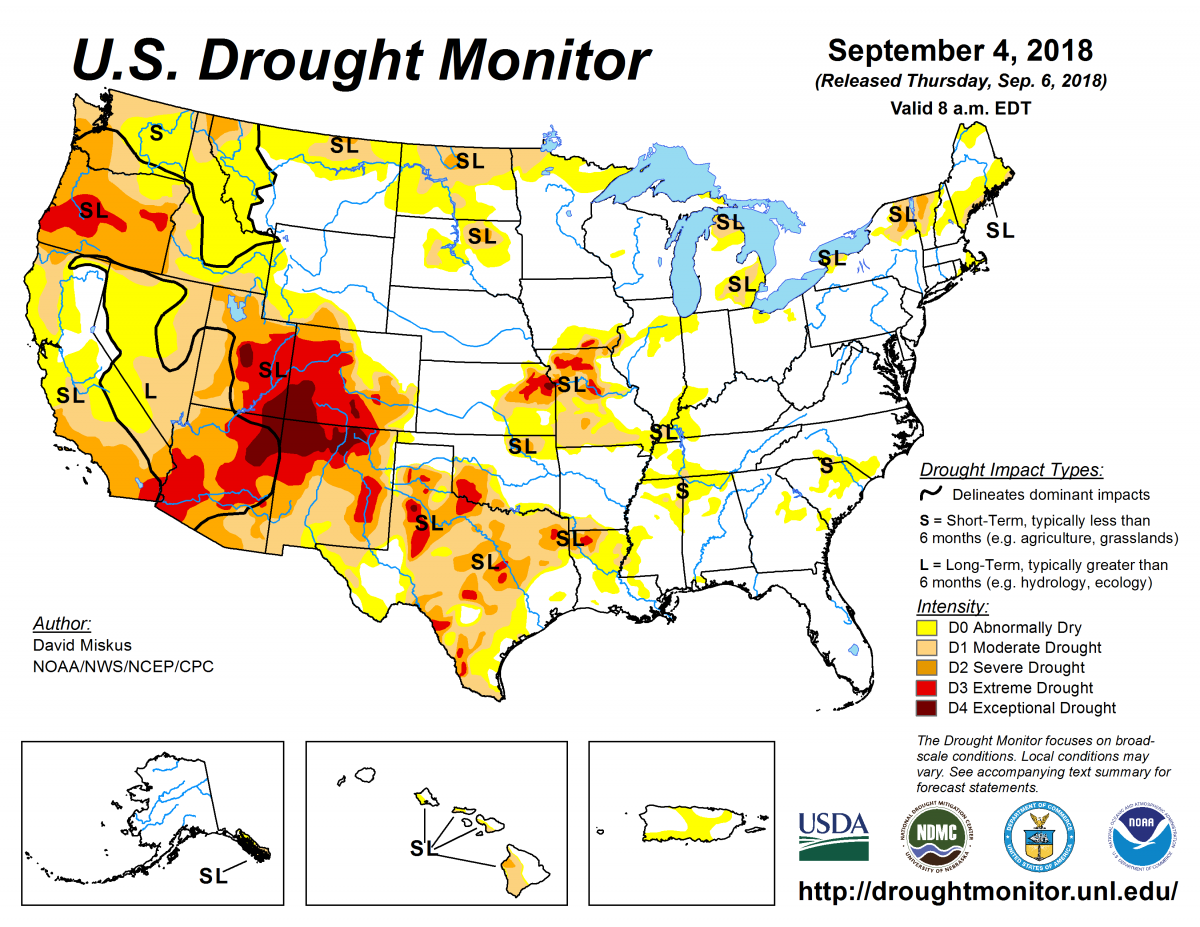 According to the September 12, 2017, U.S. Drought Monitor, moderate to exceptional drought covers 16.1% of the contiguous United

According to the May 14, 2019, U.S. Drought Monitor, moderate to severe drought covers 2.4% of the United States, a slight