There was a transition in the atmospheric circulation over the contiguous United States. The week began with the remnants of Hurricane Ida moving out of the central Appalachians and across the Northeast, where it left widespread flooding, damage, and death. It was followed by a couple of cold fronts that reached the Gulf of Mexico coast; the fronts brought cooler-than-normal weekly temperatures to the eastern third of the country. A strong upper-level low-pressure system moved across the northern tier states as the week progressed, while a high-pressure ridge migrated from the southern Plains to the West by the end of the week. This complicated dance of pressure systems resulted in a warmer-than-normal week over the southern to central Plains and near to cooler-than-normal temperatures over the West.

Ida, the cold fronts, and an active Southwest monsoon brought above-normal precipitation to the Southwest, central and northern Plains, Ohio Valley, Appalachians, and much of the Northeast, while the week was drier than normal across the rest of the West, southern Plains, Great Lakes, and coastal Southeast. Drought contraction occurred in the Southwest, central to northern Plains, and central Appalachians, while expansion or intensification happened in a few parts of the southern Plains, western Great Lakes, and coastal Southeast, as well as parts of Puerto Rico. Overall, contraction exceeded expansion, with the nationwide moderate to exceptional drought area decreasing this week.

Abnormal dryness and drought are currently affecting nearly 97  million people across the United States including Puerto Rico—about 31.1% of the population. 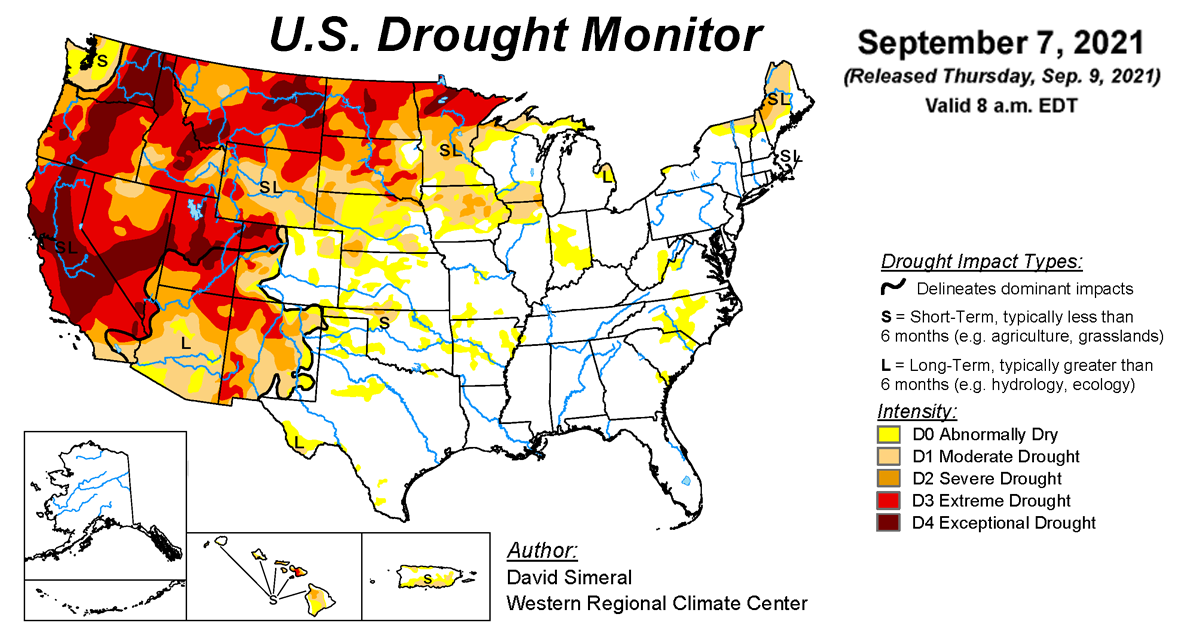 According to the June 5, 2018, U.S. Drought Monitor, moderate to exceptional drought covers 22.6% of the United States, a slight