Several actors did a complicated dance on the atmospheric stage across the contiguous U.S. during this U.S. Drought Monitor (USDM) week (November 9-15). The week began with a cold trough in the upper-level circulation over the western contiguous U.S. and a ridge over the East. A cold front and surface low associated with the trough spread rain and snow across a large part of the West, with cold air moving across the West and into the northern Plains.

Much of the country east of the Rockies was dry and warmer than normal beneath the ridge, but then-Tropical Storm Nicole was bearing down on Florida. As the week progressed, the trough and its front moved eastward, displacing the ridge east over the Atlantic Ocean, while Nicole was steered northward as it got caught up in the upper-level flow once it breached Florida’s shores. Cold air spread across the Plains and into the Midwest behind the front, while the tropical moisture associated with the remnants of Nicole became absorbed into the front. As the front and Nicole’s moisture stretched across the Eastern Seaboard, cold air smothered virtually the entire contiguous U.S. and another Pacific weather system brought more rain and snow to the West.

In the next couple of days, the new weather system tapped Gulf of Mexico moisture as it moved east of the Rockies to spread precipitation from the Southeast to the Great Lakes. As the USDM week ended, a strong upper-level trough set up shop over the central part of North America, guaranteeing several more days of cold Canadian air for much of the contiguous U.S. The end result of this atmospheric dance was a colder-than-normal week for the contiguous U.S. from the West Coast to Mississippi River, with warmer-than-normal weekly temperatures along just the East Coast.

Much of the contiguous U.S. from Florida to the eastern Great Lakes and eastward was wetter than normal due to the first front and Nicole’s moisture. Parts of the West from California to Montana were also wetter than normal. Additionally, it was a wet week for the northern Plains to Upper Mississippi Valley, along a narrow band from Wisconsin to central Oklahoma, and across northeast Texas to Louisiana.

Some areas missed out on the precipitation, with much of the Pacific Northwest, central Plains to New Mexico and western Texas, and Michigan to Arkansas being drier than normal. Drought and abnormal dryness contracted in parts of the West, Plains, and Mississippi Valley, and much of the East. But drought or abnormal dryness expanded or intensified in a few parts of the central Plains, Midwest, and Deep South.

Nationally, contraction exceeded expansion, with the nationwide moderate to exceptional drought area decreasing this week. Abnormal dryness and drought are currently affecting over 218 million people across the United States including Puerto Rico—about 70.0% of the population. 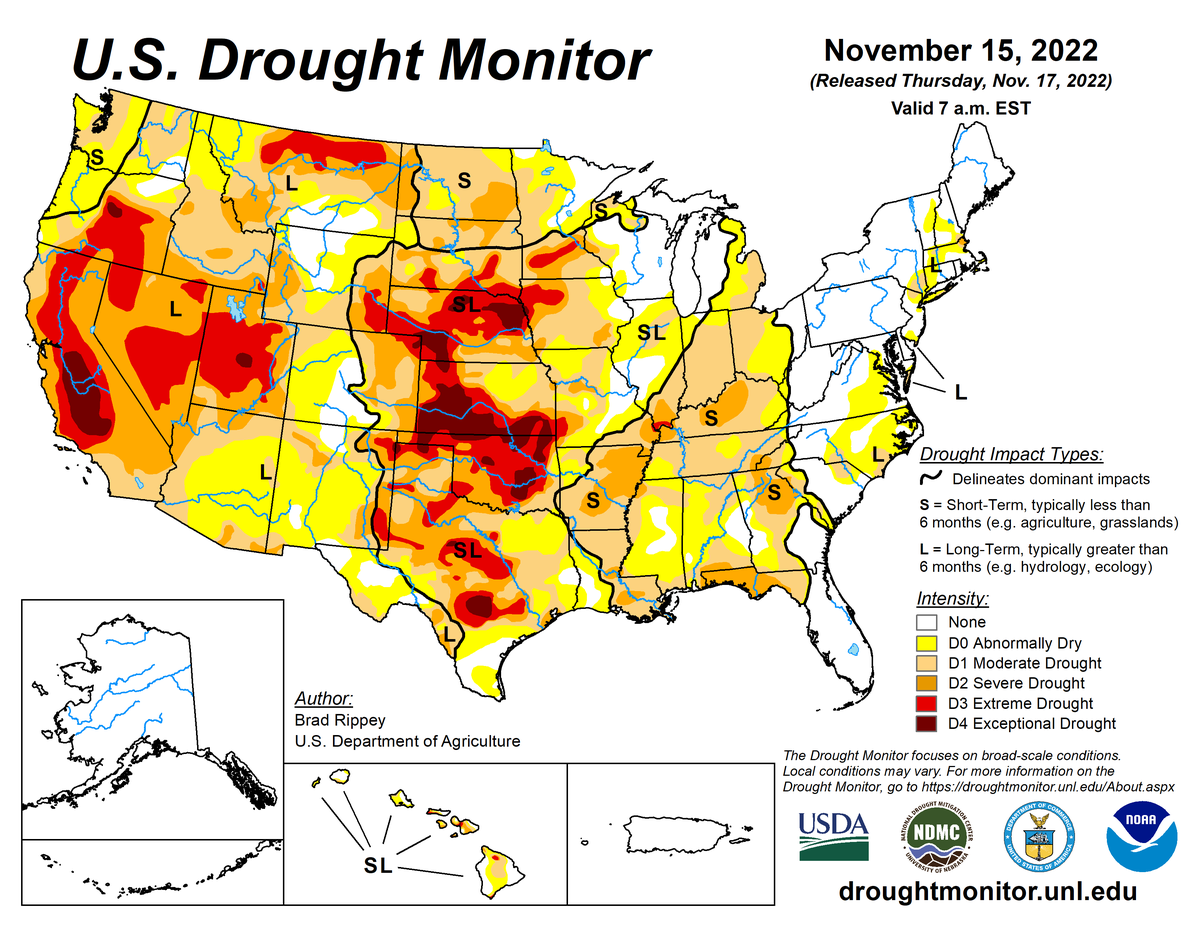 The full U.S. Drought Monitorweekly update is available from Drought.gov.

In addition to Drought.gov, you can find further information on the current drought on this week’s Drought Monitor update at the National Drought Mitigation Center.

The most recent U.S. Drought Outlook is available from NOAA’s Climate Prediction Center. The U.S. Department of Agriculture’s World Agriculture Outlook Board also provides information about the drought’s influence on crops and livestock.

According to the February 1, 2022, U.S. Drought Monitor, moderate to exceptional drought covers 46.3% of the United States