It was a battle of titans this week on the weather scene. A very strong high pressure ridge in the upper-level circulation was entrenched across the western contiguous United States and extended into the east.

A strong Pacific weather system smashed into the ridge, dragging a cool front that brought precipitation to parts of the northern High Plains and Rockies but did little else in the otherwise very dry air across the West. However, the weather system set up a flow that pulled Pacific moisture from the remnants of Hurricane Kay into the Southwest, bringing a wetter-than-normal week to parts of southern California, Nevada, and Arizona. The weather system strengthened as it moved across the eastern half of the contiguous United States—its cold front worked together with a frontal zone lingering in the South from last week to spread above-normal rainfall across parts of the Midwest, Southeast, and Northeast. The weather system also brought cooler-than-normal weather to parts of the southern and central Plains, much of the Lower to Mid-Mississippi Valley, and extending to parts of the southern Appalachians. In spite of the feisty weather system, much of the West, Plains, and northern New England remained dry and warmer than normal due to the influence of the monster ridge, and dozens of large wildfires continued their rampage across the northern Rockies and down the West Coast.

Drought and abnormal dryness contracted where it rained in parts of the West, South, Midwest, and Northeast. But expansion or intensification of drought and abnormal dryness occurred in much of the Pacific Northwest to northern and central Plains, and in parts of the Great Lakes. Nationally, expansion exceeded contraction, with the nationwide moderate to exceptional drought area increasing this week.

Abnormal dryness and drought are currently affecting over 169 million people across the United States including Puerto Rico—about 54.3% of the population. 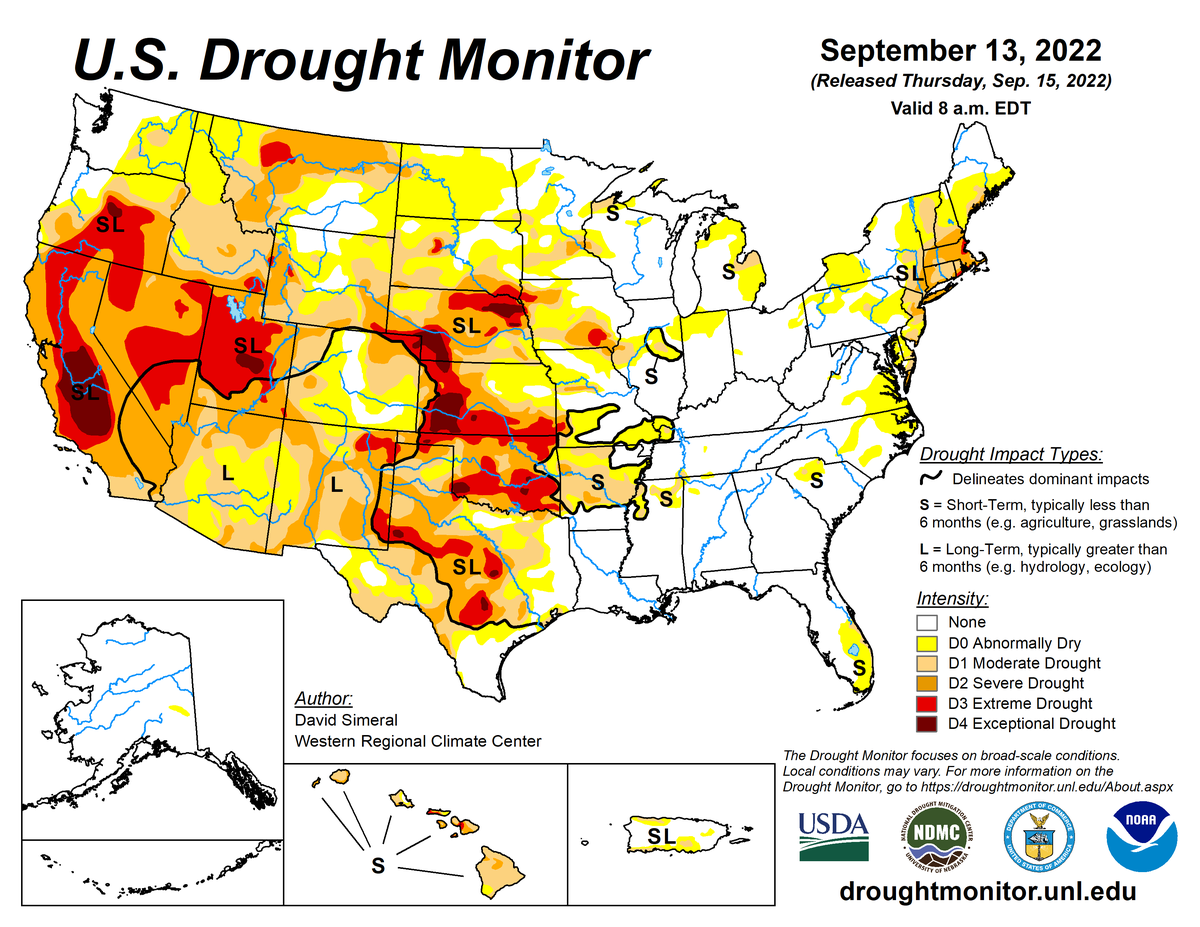 According to the May 30, 2017, U.S. Drought Monitor, moderate to extreme drought covers 5.3% of the contiguous United States, an

According to the November 6, 2018, U.S. Drought Monitor, moderate to exceptional drought covers 18.1% of the United States, a

According to the October 16, 2018, U.S. Drought Monitor, moderate to exceptional drought covers 20.5% of the United States, a