Foehn winds are downsloping, warm, and dry winds that occur on the leeward, or sheltered, side of mountain ranges, such as the Alps, the Andes, and the Rocky Mountains. In the Rocky Mountains, these winds are known as Chinook winds and are fairly common during the winter months. These winds often bring extreme increases in temperatures to the region as they move from west to east across the mountains. While these winds bring warmer temperatures during the winter months, they can often be devastating, with sustained winds and gusts sometimes as strong as those produced by tornadoes and hurricanes.

While the foothills area of southeastern Wyoming and Colorado experienced a number of strong Chinook events in January 1982, the most severe episodes took place on January 17 and on January 24, two consecutive Sundays. On those days in Boulder, Colorado, and along the Front Range, the winds caused damage equivalent to EF1 and EF2 tornadoes, uprooting trees, power lines, and damaging many roofs. 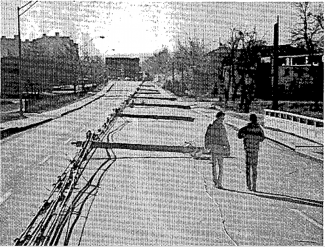 On January 17, there were numerous reports of peak wind gusts in excess of 100 mph in the area. NOAA’s Environmental Research Laboratory, now known as Earth System Research Laboratory (ERSL), measured a 118-mph gust on its roof before the power failed. The National Center for Atmospheric Research (NCAR) at Table Mesa in southwest Boulder recorded a maximum wind gust of 137 mph just after 2:00 a.m. MST on the roof, 600 feet above the city. During the second high-wind period, NCAR recorded a 130 mph gust. In all, 20 gusts of over 120 mph were clocked at NCAR between 1:00 a.m. and 9:00 a.m. MST.

Boulder bore the brunt of the damage during the January 17 windstorm, which was one of the worst in the area’s recorded history. An estimated 40% of all buildings in Boulder suffered at least minor damage between the night of January 16 and the morning of January 17; about 50 homes were damaged badly enough to be uninhabitable. In one instance, a gust completely unroofed a home, with the roof sailing over two adjacent houses before landing on a third. The winds also hit the Boulder Municipal Airport especially hard, destroying about 20 small planes. Several utility poles snapped, and thousands of electricity customers were without power. The wind also caused erosion damage to about 50,000 acres of farmland in Boulder County.

Again, on January 24, the Chinooks howled down into the area. While Fort Collins, Colorado, about 45 miles north of Boulder, had escaped the brunt of the windstorm a week earlier, the city was hit hard this time. Winds up to 140 mph blew in the foothills west of the city, with gusts of 80 to 100 mph in town. Several trailers were blown apart in the area, and at least two homes were completely unroofed. Between 15 and 20 power poles were also snapped by the winds. Blowing dust in the area reduced visibility to near zero.

Boulder, luckily, escaped the worst effects of this windstorm, but still saw several hundred thousand dollars of damage in the area. Four mobile homes and many cars were damaged, as were nine planes at the Boulder Municipal Airport. In the mountains just west of Denver, Gilpin County was not so lucky. The winds battered the county and partially wrecked a school in Central City. And, south of Denver, a water tank in Parker completely collapsed.

The winds extended as far south as Victor, in the mountains west of Colorado Springs, where 100-mph gusts dislodged a home from its foundation and damaged roofs on nearly half the buildings in the town. The strongest wind gust recorded was 140 mph at Wondervu, a record for that normally windy spot. Elsewhere, speeds reached 125 mph at Buckhorn Mountain, 110 at Waverly, and 92 at Boulder.

Ironically, Chinook winds can be accompanied by beautiful cloud formations, called lenticular clouds, that appear smooth and sculpted, as shown in the top image.

To learn more about this windstorm and other major weather events throughout the United States that month, check the January 1982 Storm Data Publication.

The Automated Surface Observing System (ASOS) program is a joint effort between the National Weather Service, the Federal

Sunset for Nighttime Lights at NOAA

Observations of nighttime lights are reaching their sunset at NCEI. The product, along with several others from the Visible