Please note: NCEI Order Fulfillment systems are limited in processing orders. We are working on a resolution. We apologize for any inconvenience.

The ETOPO Global Relief Model integrates topography, bathymetry, and shoreline data from regional and global datasets to enable comprehensive, high resolution renderings of geophysical characteristics of the earth’s surface. The model is designed to support tsunami forecasting, modeling, and warning, as well as ocean circulation modeling and Earth visualization.  The current version, ETOPO 2022, is available in Ice Surface and Bedrock versions that portray either the top layer of the ice sheets covering Greenland and Antarctica, or the bedrock below. For more information, email dem.info@noaa.gov. 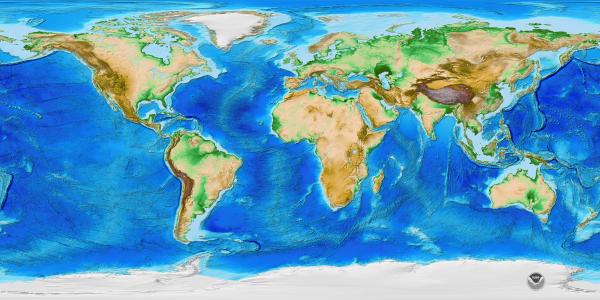 Use the Grid Extract interactive map to create and download spatial subsets of data from the Ice surface and Bedrock versions of ETOPO 2022.

ETOPO1 is available in Ice Surface and Bedrock versions that portray either the top layer of the ice sheets covering Greenland and Antarctica, or the bedrock below.

The Global Land One-kilometer Base Elevation (GLOBE) dataset is a global digital elevation model (DEM) with 30 arc-second (30") grid resolution. It was the first publicly available, high resolution DEM to cover more than two-thirds of the earth’s surface, though copyrighted or limited distribution products like NIMA predated it. GLOBE data comes from 11 sources, via 18 combinations of source/lineage processing. Scientists compiled DEMs available at griddings of 1-km or smaller, adding or making the best available grids for other areas to complete global coverage of land areas. Organizations from around the world contributed in some way to source data or post-source processing and quality control that ultimately found their way into GLOBE.

For help and information on the data format and how to import, see Ch. 11 in the project report. (Begins on Page 88)

Many areas multiple candidate datasets, which were compared before final selection and mosaicked into the full global DEM. The CEOS GLOBE Task Team and IGBP-DIS. The final product received peer review on four continents.

Contains higher quality copyrighted data in areas where it was licensed, available, and necessary

While thousands of people have summited Mount Everest, the highest point on Earth, fewer than a handful have managed to explore

With nearly 80 percent of the world’s oceans unexplored and unmapped, an international collaboration is underway to facilitate

In a seemingly endless and vast ocean, how do fishers actually manage to find fish? Do they rely on experience and grit alone