Cite the dataset version number and timestamp when using USHCN v2.5 data (as well as Menne et al. 2009) for analysis. 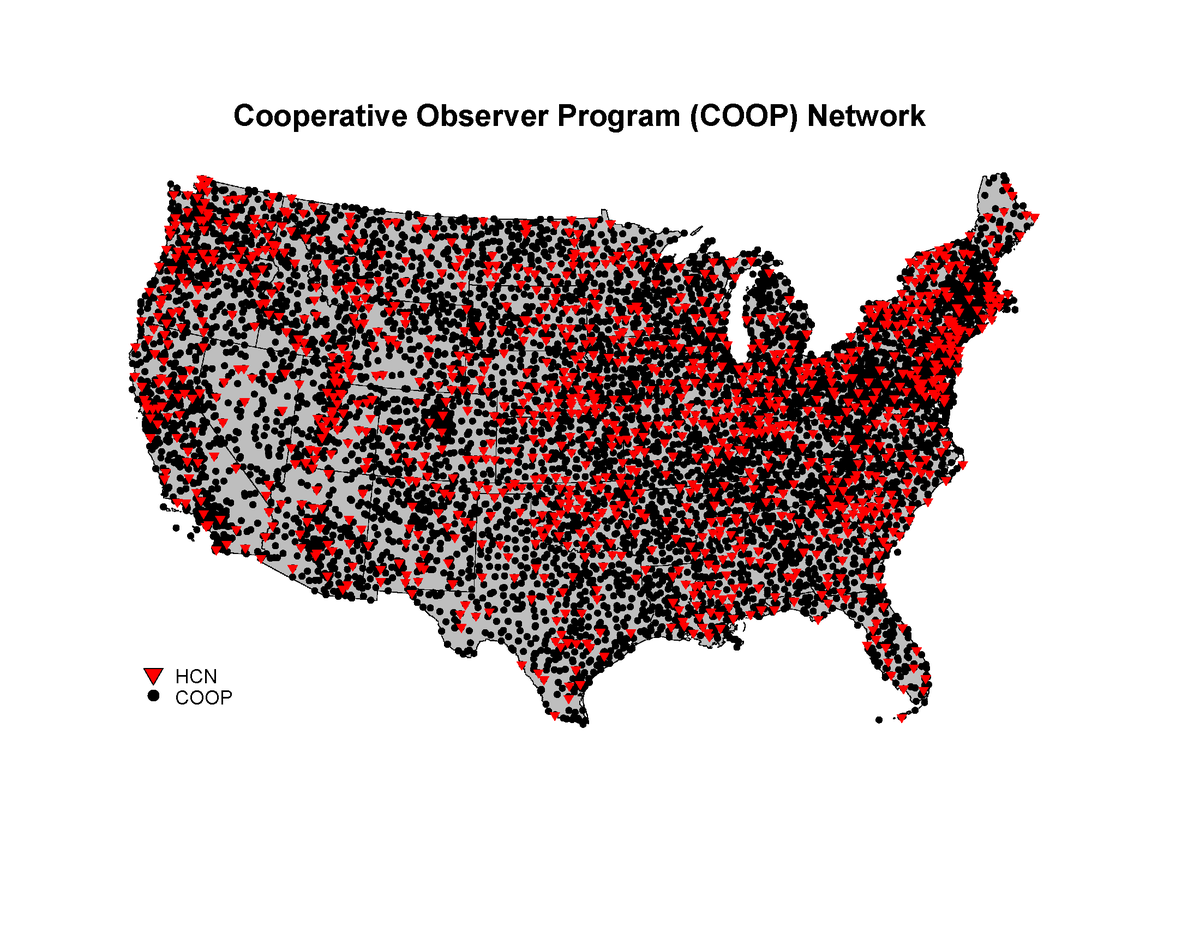 Pairwise Homogeneity Algorithm (PHA) software (Menne and Williams 2009) version 52i is used to detect and adjust for documented and undocumented inhomogeneities in the USHCN version 2.5 monthly temperature dataset.

PHA version 52d was used to adjust the v2 dataset

Please refer to the readme file in these directories for guidance on how to download, deuncompress, compile, and run the pairwise homogenization software. The "tar/g zipped" file contains all of the necessary software to run the pairwise homogenization procedure. A simulated test dataset is included with the software along with a file of the expected output. Use the file of the expected output to verify proper execution of the code.

Version 2.5 was released as a revision to the version 2.0 dataset In October 2012. The processing steps for version 2 and 2.5 are essentially the same, but the version number change reflects modifications to the underlying database as well as coding changes to the pairwise homogenization algorithm (PHA) that improve its overall efficiency. Table 1 (below) lists these modifications. NCEI Technical Reports GHCNM-12-01R (Williams et al., 2012a) and GHCNM-12-02 (Williams et al. 2012b) provide details regarding the PHA modifications.

In 2007, USHCN version 2 serial monthly temperature data were released and updates to the version 1 datasets were discontinued.

Since 1987, NCEI has used observations from the U.S. Historical Climatology Network (USHCN) to quantify national and regional-scale temperature changes in the conterminous United States (CONUS). USHCN temperature records are corrected to account for various historical changes in station location, instrumentation, and observing practice. This network of stations is a designated subset of the NOAA Cooperative Observer Program (COOP) Network. USHCN sites were included in the COOP network based on spatial coverage, record length, data completeness, and historical stability.

USHCN datasets were originally developed at the former National Climatic Data Center (NCDC) in collaboration with the Department of Energy (DOE) Carbon Dioxide Information Analysis Center (CDIAC) in the mid-1980s (Quinlan et al. 1987). The project was launched by personnel at DOE Global Change Research Program and NCDC with the goal of developing an accurate, unbiased, up-to-date historical climate record for the United States. Their first step was to define a network of 1219 stations in the contiguous United States to provide observations for a key baseline dataset for monitoring U.S. climate.

Photographic documentation of poor siting conditions at stations in the USHCN has led to questions regarding the reliability of surface temperature trends over the conterminous U.S. (CONUS). To evaluate the potential impact of poor siting/instrument exposure on CONUS temperatures, Menne et al. (2010) compared trends derived from poor and well-sited USHCN stations using both unadjusted and bias-adjusted data. Results indicate that there is a mean bias associated with poor exposure sites relative to good exposure sites in the unadjusted USHCN version 2 data; however, this bias is consistent with previously documented changes associated with the widespread conversion to electronic sensors in the USHCN during the last 25 years Menne et al. (2009). The sign of the bias is counterintuitive to what would be expected from poor exposure because associated instrument changes have led to an artificial negative ("cool") bias in maximum temperatures and only a slight positive ("warm") bias in minimum temperatures.

Adjustments applied to USHCN Version 2 data largely account for the impact of instrument and siting changes, although a small overall residual negative (“cool”) bias appears to remain in the adjusted USHCN version 2 CONUS average maximum temperature (see also Fall, S. 2011). Nevertheless, the adjusted USHCN CONUS temperatures are well aligned with recent measurements from the U.S. Climate Reference Network (USCRN). This network was designed with the highest standards for climate monitoring and has none of the siting and instrument exposure problems present in USHCN. The close correspondence in nationally averaged temperature from these two networks is further evidence that the adjusted USHCN data provide an accurate measure of the U.S. temperature.

The Menne et al. (2010) results underscore the need to consider all changes in observation practice when determining the impacts of siting irregularities. Further, the influence of non-standard siting on temperature trends can only be quantified through an analysis of the data which do not indicate that the CONUS average temperature trends are inflated due to poor station siting.