How Science Predicts the Aurora

From September until April, when the days are at their shortest and often their darkest, the Northern Lights are at their brightest. There’s no doubt that the stunning light shows, known scientifically as the Aurora Borealis (Aurora Australis in the Southern Hemisphere), are not only an item on many people’s bucket lists, but also a boom to the local economies lucky enough to have a front-row seat for the show.

For those of us who aren’t lucky enough to view the Northern Lights from our living rooms, like those in Iceland or the Canadian Yukon, how do we know when is a good time to book our plane tickets and bundle up for a trip to see this spectacle? Thankfully, science has the answer.

Auroras exist in both the Northern and Southern Hemispheres, but the northern counterpart is far more popular for tourists hoping to catch a glimpse of the display. The Northern Lights evolve from the sun’s activity that affects the conditions in space. Space weather—caused by geoeffective solar activity such as solar flares and coronal mass ejections—can impact the space between here and the sun, causing an aurora as a byproduct. NOAA scientists at the Space Weather Prediction Center (SWPC) monitor and track these phenomena related to space weather and have developed methods to predict the likelihood of significant aurora.

Being able to see the aurora depends mainly on two factors, geomagnetic activity (the degree of disturbance of the earth’s magnetic field at the time) and your geographic location. Of course, local weather, light pollution from city lights, a full moon, and other factors can affect your viewing possibilities as well.

To know whether you have a chance of seeing an aurora, you need to know the level of geomagnetic activity at the time you are viewing. To do this, you’ll check an index called Kp, a number from 0–9, which is used to rate the global geomagnetic activity for a 3-hour period. The higher the Kp index is, the better your chances are for seeing an aurora. Generally, you are looking for a Kp of 5 or greater.

You can check out the SWPC Estimated Planetary K-index graph to see what has been happening during the past few days. The red bars indicate a Kp higher than 4, which makes your odds of seeing an aurora greater. And if Kp is currently elevated due to a phenomena called corotating or stream interaction, then be on the lookout for elevated Kp and potential for auroral viewing 27 days or one solar rotation from now. You can also check the predicted Kp in the next few days with this website, but without the graphic. 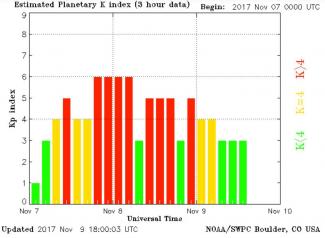 The Kp Index bar plot shows geomagnetic activity for eight 3-hour periods per day. The higher the bars, the higher the activity. Bars in red have a Kp over 4, indicating a better chance of aurora activity. Courtesy of NOAA Space Weather Prediction Center

The final step in making your aurora prediction complete is knowing the best geographic location for viewing. In general, you are more likely to see an aurora at a higher latitude, closer to the North or South Poles.

Simple, right? Well, not exactly. The problem is that Earth’s magnetic poles are not exactly in line with the geographic poles. For aurora viewing, the magnetic poles are more important. Luckily, SWPC has developed a handy table that lists many major cities and their corresponding magnetic latitude (see table below). You can also use the NCEI Geomagnetic Calculator to find the magnetic latitude and longitude of any location. 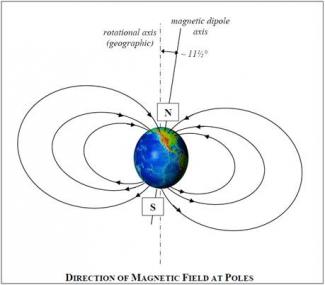 This picture represents the direction of the Earth’s magnetic field at its poles. Courtesy of Colorado Center for Astrodynamics Research, University of Colorado, Boulder.

When geomagnetic activity is low, you can typically see the aurora around 67 degrees magnetic latitude. To give you an idea of how far north that truly is, Anchorage, Alaska, has a magnetic latitude of about 61 degrees. So during low activity, you would need to drive north of Anchorage, perhaps to Talkeetna, Alaska, or further. 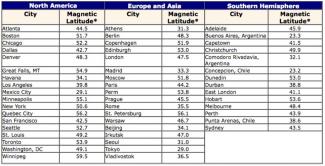 If you want to know how far south an aurora can be observed based on geographic location and the Kp index, check out links to the following maps of different regions. Remember, the Kp level has to be much higher the closer you get to the equator:

The table below shows a range of magnetic latitudes (along with example nearby locations) and the activity Kp levels have to reach to see an aurora:

A more visual prediction tool is SWPC’s OVATION Aurora Forecast Model. This model shows the latest activity level in video form. The green band that appears on the video changes colors based on the likelihood of aurora activity. The closer to red the band becomes, the more likely an aurora may appear in that area of the globe. 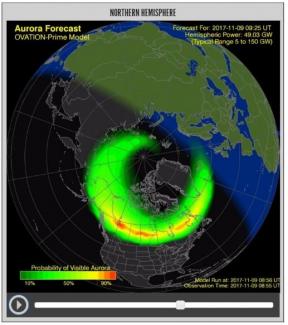 With the SWPC OVATION Aurora Forecast Model, you can predict the probability of a visible aurora by watching the changes in the green band as it circles the Northern Hemisphere. Courtesy of NOAA Space Weather Prediction Center

Putting the Pieces Together

Once you know your magnetic latitude and how high the Kp index needs to be, it comes down to choosing a viewing time of high geomagnetic activity by frequently checking the Estimated Planetary K-index and the SWPC forecast.

Of course, you’ll also want to make sure you’re far enough away from a city to prevent light pollution. Check out the World Atlas of Artificial Sky Brightness—the brighter the area in this zoomable map, the harder it is to see stars and aurora in the night sky.

Check out the NOAA Weather Forecast for the area to make sure it isn’t too cloudy.  And don’t forget to check out the moon phases before you go. A full moon makes it much more difficult to see an aurora because the background night sky will be brighter.

Tracking Changes in Earth’s Magnetic Poles
Science, Beauty, and Mystery of Auroras
Navigating Our Planet with Magnetic Models
NOAA SWPC Aurora
SWPC Tips on Viewing the Aurora
What Is Space Weather?
Earth's Magnetic Field: The Force That's Always With You

A modern electronic compass helps us understand fields not in our vision. Our High Definition Geomagnetic Model (HDGM) provides