Eclipse Will Have Atmospheric Impact

On August 21, outside of Lusk, Wyoming, Terry Bullett and Justin Mabie, like thousands of others across the United States, will be watching the solar eclipse cross the sky above. Totality there will last for less than two minutes, starting at 11:46 am (MDT). But, Bullett and Mabie will be watching the eclipse with more than just their (appropriately protected) eyes. They’ve set up instruments in a field outside of Lusk to take research radar measurements before, during, and after the eclipse. Information captured by their instrument will help them study the ionosphere, a part of the upper atmosphere that’s critical for radio and other forms of communications.

“The solar eclipse changes the ionosphere dramatically,” said Bullett, so that creates a sort of natural experiment to improve our understanding of this part of the atmosphere. “The ionosphere is like a wavy surface in a pool, and by measuring the characteristics of the waves produced there, we can learn more about the pool and what can disturb it, when, and by how much," said Bullett, who, along with Mabie, is a researcher with the Cooperative Institute for Research in Environmental Sciences (CIRES) at the University of Colorado Boulder, working with NCEI in Boulder.

The ionosphere, a large part of Earth's atmosphere, reaches from about 60 km to 1,000 km above Earth’s surface and parts of it are highly charged. Solar radiation hitting the ionosphere ionizes atoms and molecules in the region, creating a layer of what physicists call plasma. During a solar eclipse, when the moon blocks more of that solar radiation from reaching Earth, there are massive changes in the ionosphere’s electrical conductivity. Those changes ripple out, affecting Earth’s own electric and magnetic fields.

“Because the ionosphere has conductive currents running through it, it’s part of the global magnetic system,” he said. That means eclipse-related disturbances may affect not only radio-relevant parts of the atmosphere, but the entire geomagnetic field, which can put at risk satellites, astronauts, and more.

A solar eclipse provides a rare opportunity to take measurements under atmospheric conditions much more controlled than usual. Those measurements during the eclipse will let the team test a model of the ionosphere developed by the Naval Research Laboratory. The Navy wants to better understand this region of the atmosphere since it’s important for high-frequency radio communications. “The eclipse gives us a testbed, and our data will be the observational component,” said Bullett.

In Lusk, Bullett and Mabie will deploy a temporary radar to measure those changes in the ionosphere during the eclipse, and they’ll run a similar setup at NOAA in Boulder, Colorado, outside the path of totality. The researchers picked the tiny Wyoming town as their temporary laboratory because it lies in the path of totality and also very close to a magnetic field line that runs up through Boulder and just west of town.

Their Vertical Incidence Pulsed Ionospheric Radar (VIPIR) consists of a 60-foot tower with transmission lines reaching out toward eight receiving antennas, carefully spaced around the tower. 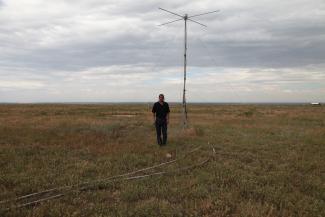 Researcher Justin Mabie stands in front of a test tower north of Boulder, Colorado, where he and colleague Terry Bullet set up their equipment for testing before installing it near Lusk, Wyoming. Courtesy of Katie Weeman, CIRES

Inside an old, converted RV are the brains of the operation: a state-of-the-art transmitter, on loan from the Navy, that will send high-power, high-energy radio pulses up into the ionosphere. Those pulses will bounce off that layer and return to an 8-channel receiver, also in the RV.  “We can observe the electron density, the amount of time it takes the signal to get to space and back again,” Mabie said. That tells them how the radio waves interact with the ionosphere.

The Wyoming instrument will “talk” with a similar instrument, on a permanent tower in Colorado, that can make measurements up to 300 km into the atmosphere. Together, these instruments will help the scientists understand the changing density, total pressure, plasma physics, and magnetic field of the ionosphere. 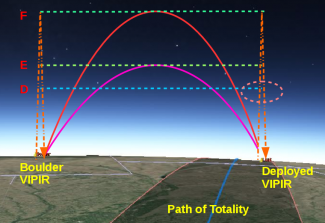 Schematic of the two VIPIR instruments that will make observations of the ionosphere during the August 21 solar eclipse. Courtesy of Terry Bullett, NCEI and CIRES

After collecting detailed measurements continuously from August 16-24, Mabie and Bullett will work with CU Boulder physicist Nikolay Zabotin to analyze the dynamics of the ionosphere. They hope to learn much more than “just” what happened during the eclipse, Bullett said. “We will be able to obtain 2- and 3-dimensional images of the entire ionosphere, to better understand this important and little understood region of the atmosphere.”

“We couldn’t do this work without great help from the town of Lusk,” Mabie said. “They’ve been supporting us throughout the effort while preparing for a deluge of visitors at the same time.”

Adapted from Eclipse Will Have Atmospheric Impact by the Cooperative Institute for Research in Environmental Sciences.

Over a decade ago, the sun played a rather spooky Halloween trick on the planet when it unleashed a series of massive solar

From September until April, when the days are at their shortest and often their darkest, the Northern Lights are at their