Please note: NCEI Users should expect delays accessing the most recent data for the following: Daily Summaries, Global Hourly, LCD, and GSOD. We are working to resolve the issue as soon as possible. We apologize for any inconvenience.

Assessing the Global Climate in October 2022

Earth had its fourth-warmest October on record 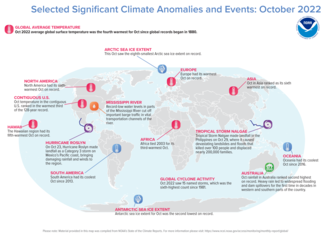 Globally, October 2022 was the fourth-warmest October in the 143-year NOAA record. The year-to-date (January-October) global surface temperature was sixth warmest on record. According to NCEI’s Global Annual Temperature Outlook, there is a greater than 99% chance that 2022 will rank among the 10-warmest years on record but less than 2% chance that it will rank among the top five. 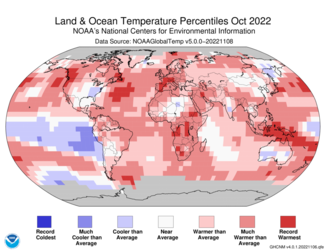 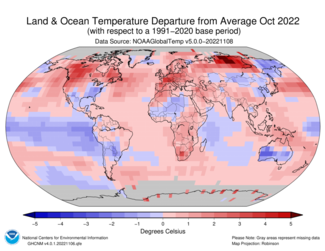 Temperatures were much above average across most of Europe, northern and western North America, northern Asia, northwestern, eastern, and southern Africa, and across parts of northern Oceania and western Asia. Parts of western and central Europe experienced record-high October temperatures, which totaled 7.12% of the Earth’s surface this month. Sea surface temperatures were above average across much of the Atlantic, the northern, western, and southwestern Pacific, and the Mediterranean Sea, as well as parts of the eastern Indian Ocean.

Temperatures were near- to cooler-than-average across parts of southeastern North America, central and western South America, eastern central Asia, and southern Oceania. The Gulf of Mexico, the central, eastern tropical, and southeastern Pacific Ocean, and parts of the western Indian Ocean experienced near- to cooler-than-average sea surface temperatures. However, no land or ocean surfaces had a record-cold October.

According to data from NOAA and analysis by the Rutgers Global Snow Lab, the Northern Hemisphere snow cover extent during October was 510,000 square kilometers (200,000 square miles) above the 1991-2020 average. Extent in North America was less than average, whereas Eurasia had a slightly above-average snow cover extent for October.

For a more complete summary of climate conditions and events, see our October 2022 Global Climate Report.

Assessing the Global Climate in 2022

According to NOAA scientists, the global surface temperature for 2022 was the sixth highest since record keeping began in 1880

Assessing the Global Climate in November 2022

November Highlights: This year saw the fifth-warmest September-November period, tied with the years 2016 and 2018. Arctic and

During February, the average contiguous U.S. temperature was 41.2°F, 7.3°F above the 20th century average. This ranked as the

Assessing the Global Climate in July 2021

The global temperature for July 2021 was the highest for July in the 142-year NOAA record, which dates back to 1880. The year-to