Assessing the Global Climate in November 2022

Earth had its ninth-warmest November on record 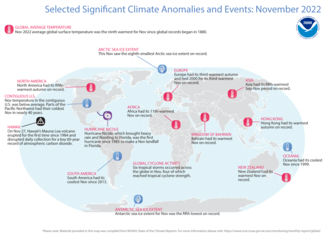 Globally, November 2022 was the ninth-warmest November in the 143-year NOAA record. The year-to-date (January-November) global surface temperature was the sixth-warmest on record. According to NCEI’s Global Annual Temperature Outlook, there is a greater than 99% chance that 2022 will rank among the 10-warmest years on record but less than 1% chance that it will rank among the top five. 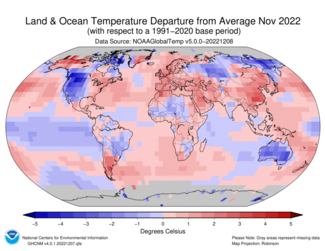 Temperatures were near- to cooler-than-average throughout much of western and northeastern North America, eastern South America, northern and northeastern Asia, Australia, and across parts of north-central Africa. Parts of western North America had their coldest November in nearly 40 years. Consistent with La Niña, sea surface temperatures were below average over much of the south-central, central, and eastern tropical Pacific. None of the world's surface had a record-cold November. 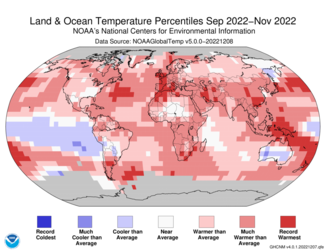 For a more complete summary of climate conditions and events, see our November 2022 Global Climate Report.

Key Points: The average temperature of the contiguous U.S. in June was 70.7°F, which is 2.2°F above average, ranking 15th

Assessing the U.S. Climate in March 2020

In the first three months of 2020, there were two weather and climate disaster events with losses exceeding $1 billion each

Assessing the Global Climate in June 2019