Tropical cyclones are one of the most dangerous weather events on Earth, but at their core lies a paradox—an area of clear skies and calm winds called the eye. The eye is surrounded by an eyewall, which is composed of towering clouds, intense severe weather, and the storm’s strongest winds. The more defined a cyclone’s eye and eyewall, the greater the intensity of the storm. So, determining when, where, and how often eyes occur is imperative for understanding how these storms are changing over time.

To determine how often eyes occur, where they occur most frequently, and how their size varies, NCEI scientist Ken Knapp and his colleagues at the Cooperative Institute for Meteorological Satellite Studies developed a global climatology of tropical cyclone eyes, which is described in a paper recently published in Monthly Weather Review.

What can a climatology of tropical cyclone eyes tell us?

This 34-year climatology showed that more than half of the tropical cyclones occurring between 1982 and 2015 developed at least one eye. On average, the eye storms had an eye for at least 30 hours, and 50 percent of the systems developed their first eye within two days of becoming a named storm. Hurricane Ioke in 2006 had an eye for the longest period of time at 12 complete days. And, storms with an eye had average wind speeds nearly three times stronger than those that never produced an eye. 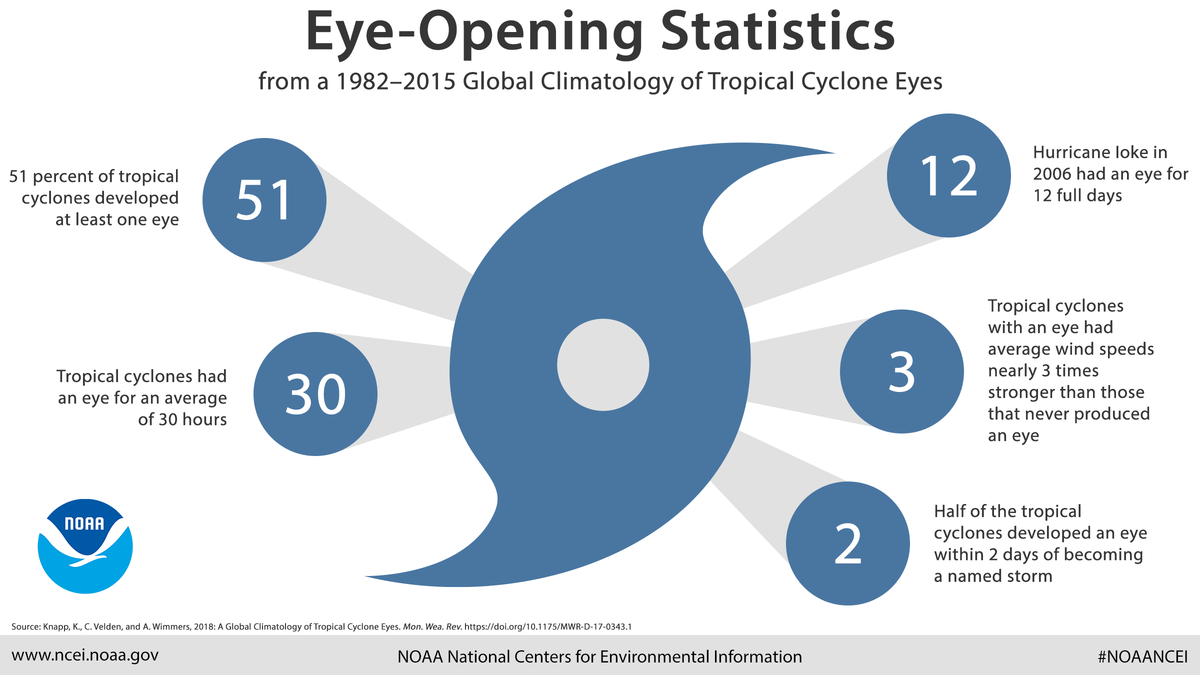 Tropical cyclone eyes were much more frequent in the Northern Hemisphere, but eyes in the Southern Hemisphere were typically larger than their northern counterparts. Eyes were seen in approximately:

The climatology also showed that the areas where eyes occur have been expanding toward the poles, which confirms previous research. This expansion is putting new areas and populations at risk for the devastating impacts of these storms.

How was this climatology developed?

To develop this climatology, the scientists used a computer algorithm to examine over a quarter million individual infrared satellite images from the global Hurricane Satellite (HURSAT) dataset. The HURSAT dataset provides geostationary satellite images of tropical cyclones in the International Best Track Archive for Climate Stewardship (IBTrACS) every three hours.

Known as the Automated Rotational Center Hurricane Eye Retrieval or the ARCHER algorithm, this program helped the scientists identify the probability of an eye being present and allowed them to easily calculate:

Because the ARCHER algorithm can objectively look at satellite images regardless of source or resolution, it was an ideal candidate for creating a longer-term climatology of these variables.

As with the development of any new dataset, it is important to compare it with previously established data to determine its accuracy and reliability. So, the scientists compared their climatology with results from the Cyclone Center project, which enlists citizen scientists to analyze and classify tropical cyclones by viewing infrared satellite images. Overall, the climatology and Cyclone Center data agreed on 95 percent of the tropical cyclones they classified as having eyes or not.

What’s next for this climatology?

While this climatology provides important insights into tropical cyclones and their history, it is not without its limitations. In the future, the scientists hope to incorporate additional satellite data from different instruments into the climatology to produce a consensus eye product. Additionally, they plan to study this new climatology alongside the HURSAT data to better understand how the structure and intensity of a tropical cyclone change over a storm’s duration.

Reporting on the State of the Climate in 2017

With significant coastal populations and property at stake, two new studies by NCEI and its research partners focus on the