A slow-moving, powerful storm system dumped heavy snow across much of the central Appalachians from November 22 to 30, 1950. Known as “The Great Appalachian Storm of 1950,” the system blanketed areas from western Pennsylvania southward deep into West Virginia with over 30 inches of snow. Several locations received more than 50 inches of snow, and Coburn Creek, West Virginia, reported the greatest snowfall total—a staggering 62 inches.

Frigid cold also stretched from the Northeast into the Ohio Valley and all the way down into the far Southeast. Temperatures fell to 22°F in Pensacola, Florida, 5°F in Birmingham, Alabama, 3°F in Atlanta, Georgia, and 1°F in Asheville, North Carolina. And this record cold led to widespread crop damage, particularly in Georgia and South Carolina.

At the time, the Great Appalachian Storm of 1950 was one of the costliest storms on record, and it contributed to at least 160 deaths. Overall, on NCEI’s Regional Snowfall Index, or RSI, this powerful storm ranked as a Category 5—the worst category—for the Ohio Valley and a Category 4 for the Northeast. 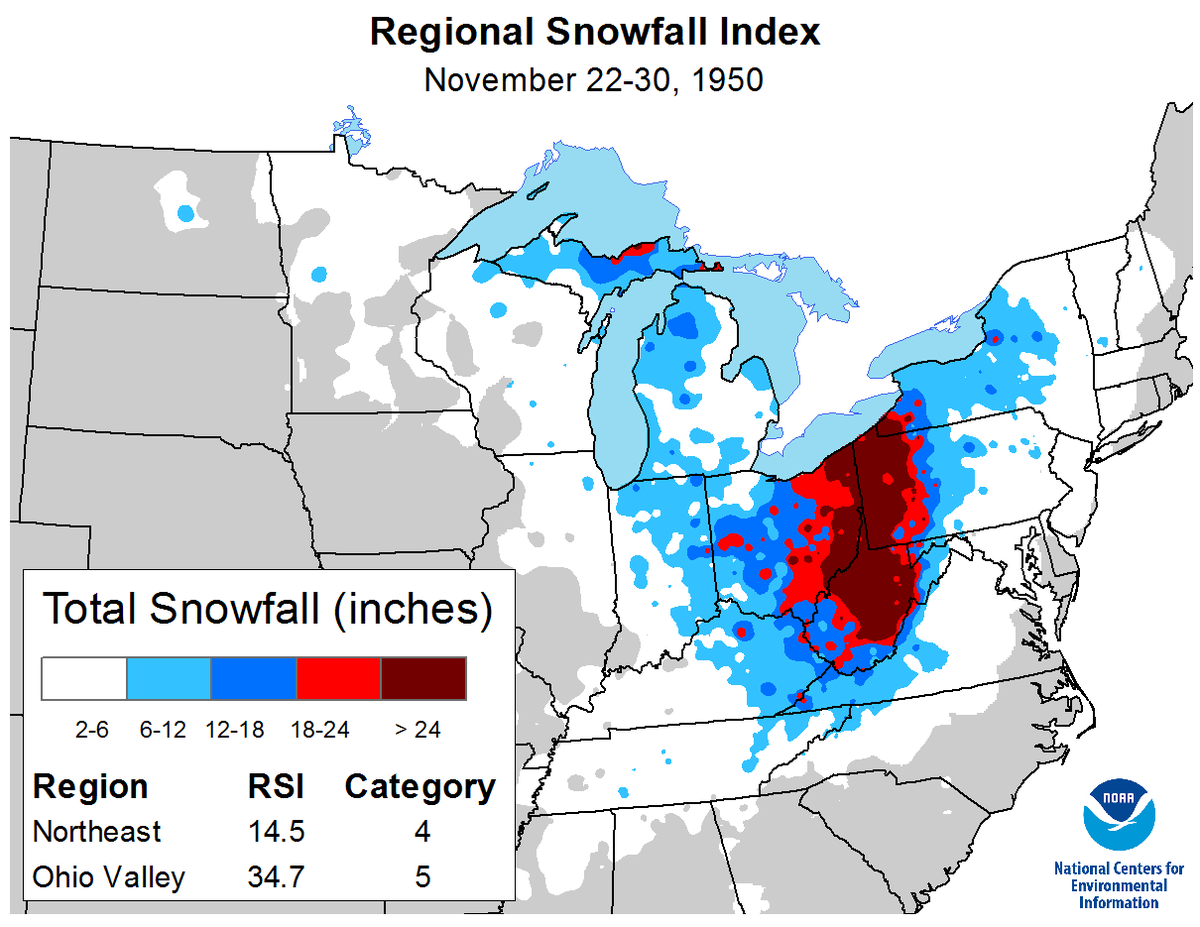 Comparing this Storm to Others in the Ohio Valley

The Great Appalachian Storm snowstorm currently ranks as the worst of the 217 Ohio Valley storms NCEI scientists have analyzed. The RSI value of 34.7 securely cements its first-place rank above the second-worst storm, which happened in March 1993 and has an RSI value of 24.6. Only four Category 5 storms have impacted the Ohio Valley since 1900.

Comparing this Storm to Others in the Northeast

In the Northeast, the Great Appalachian Storm ranks as the ninth-worst storm among the 211 analyzed. Over 30 inches of snow affecting 1.3 million people in the region largely contributed to the storm’s RSI value of 14.5. With that value, it ranks just behind the more recent February 2003, February 2010, and January 2016 storms.

The Science Behind the Regional Snowfall Index

To calculate these RSI values, NCEI scientists use a formula that takes into account the snowfall amount within the region’s borders, the spatial extent of the storm, and the relationship of these elements to the area’s population. Then they categorize the snowstorm’s impacts on a scale from 1 to 5, similar to the Enhanced Fujita scale for tornadoes or the Saffir–Simpson scale for hurricanes.

Because NCEI scientists produce separate indices for six climate regions in the eastern two-thirds of the United States, they can account for both regional variations in snowfall patterns and how the amount of snow disrupts areas of the country differently. For example, 10 inches of snow would have much less of an impact in the Northeast than it would in the Southeast. Such factors are reflected in the RSI values and rankings for each storm.

NCEI scientists have calculated RSI values for more than 625 snowstorms dating as far back as 1900, and  they add new storms each year as they occur. The RSI not only helps local officials better understand the impacts of each major snowstorm, but it also provides a historical perspective that allows them to better prepare for future storms.