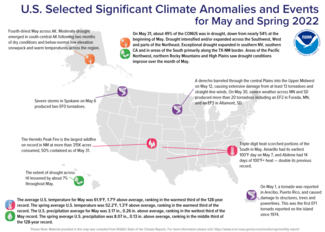 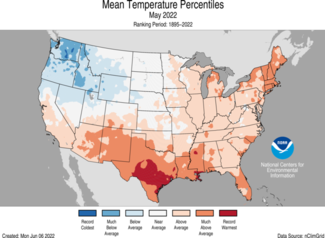 For May, a persistent trough of low pressure over the Pacific Northwest contributed to Washington state ranking eighth coldest on record while the downstream ridge brought unseasonable warmth to the Deep South, resulting in Texas ranking second warmest.

The meteorological spring (March-May) average temperature for the Lower 48 was 52.2°F, 1.3°F above average, ranking in the warmest third of the record. Temperatures were above average from California to the Deep South and, in general, from the Mississippi River to the East Coast. Temperatures were below average from the Pacific Northwest to the Upper Midwest. Rhode Island ranked fourth warmest while nine additional states across the Northeast, Southeast and Southern Tier ranked among their warmest 10 spring seasons on record.

Averaged over the first five months of the year, the contiguous U.S. temperature was 44.3°F, 1.0°F above the 20th-century average, ranking in the warmest third of the January-May record. Temperatures were above average from California to Texas and from the central Gulf Coast to New England. California ranked eighth warmest on record for this period. Temperatures were below average in parts of the Northwest and from the northern Plains to parts of the Midwest. 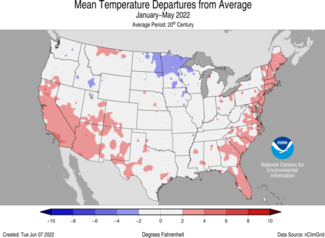 The Alaska spring temperature was 27.3°F, 3.3°F above the long-term average, ranking in the warmest third of the record for the state. Temperatures were above average across most of the state with the eastern Interior regions and parts of the Panhandle region near average for the season.

The year-to-date temperature for Alaska was 18.8°F, 3.0°F above the long-term average, ranking in the warmest third of the record for the state. Above-average temperatures were observed across most of the southern half of the state, as well as much of the West Coast. 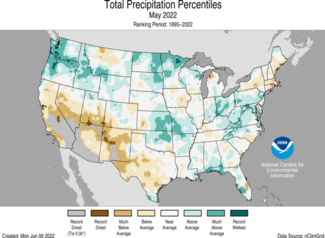 A ridge of high pressure suppressed precipitation across the Southwest in May and resulted in Arizona ranking fifth driest for the month. Conversely, the Pacific Northwest received above average precipitation, and Washington ranked eighth wettest.

The U.S. spring precipitation total was 8.07 inches, 0.13 inch above average, ranking in the middle third of the March-May record. Precipitation was above average across parts of the Northwest, northern Plains, Great Lakes, central Plains, along portions of the central and eastern Gulf Coast and across parts of the Northeast for the season. Precipitation during March-May was below average from California to the High Plains and western Gulf Coast. North Dakota ranked fourth wettest while New Mexico ranked sixth driest for the spring season.

The January-May precipitation total for the contiguous U.S. was 11.48 inches, 0.91 inch below average, ranking in the driest third of the record. Precipitation was above average from the northern Plains to the Great Lakes and from the mid-Mississippi Valley to the Northeast. Precipitation was below average across much of the West and Deep South, as well as portions of the central Plains during the January-May period. California ranked driest on record while Nevada, Utah and Arizona ranked third driest for this five-month period. North Dakota ranked fourth wettest for January-May. 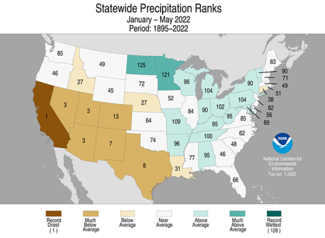 Integrated across the state, precipitation across Alaska ranked fourth driest for May. Precipitation was above average across parts of the North Slope and eastern interior regions, but was generally very dry across much of the state throughout the month.

For the spring season, precipitation ranked 12th driest across Alaska although wetter-than-average conditions were observed across the Southeast Interior division. Precipitation was below average across much of the remainder of the state.

Despite the dry May and Spring season across Alaska, precipitation averaged across the state for the January-May period ranked in the wettest third of the record and was generally above average across much of southeastern Alaska and near or below average for much of the rest of the state. Record precipitation received in early 2022 contributed to the Southeast Interior division ranking wettest on record for the January-May period.

Severe storms formed across the central Plains on May 4, producing several tornadoes including an EF3 near Lockett, TX. A line of severe storms, also known as a derecho, barreled across the central Plains into the Upper Midwest on May 12, causing extensive damage from at least 13 tornadoes and straight-line winds. The Upper Midwest was again impacted by severe weather over Memorial Day weekend, where more than 20 tornadoes were reported, including an EF2 in Forada, MN, and an EF3 in Altamont, SD.

According to the May 31 U.S. Drought Monitor report, 49.3 percent of the contiguous U.S. was in drought, down about 4.5 percentage points from the beginning of May. Drought intensified and/or expanded across the Southwest, West and parts of the Northeast. Exceptional drought expanded in southern Nevada, southern California, and in areas of the South, primarily along the Texas-New Mexico border. Areas of the Pacific Northwest, northern Rocky Mountains and High Plains saw drought conditions improve over the month of May. Moderate drought was introduced to portions of south-central Alaska, drought expanded across Puerto Rico and the extent of drought across Hawaii lessened during May.

This monthly summary from NOAA’s National Centers for Environmental Information is part of the suite of climate services NOAA provides to government, business, academia and the public to support informed decision-making. For more detailed climate information, check out our comprehensive May 2022 U.S. Climate Report scheduled for release on June 13, 2022.