Assessing the U.S. Climate in September 2022 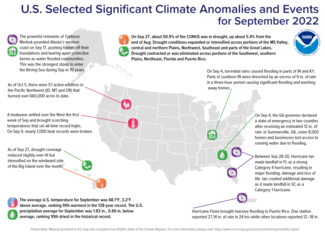 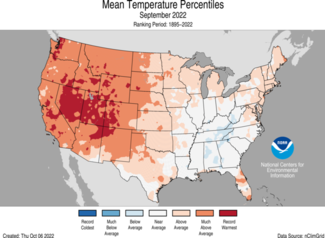 For the month of September, Nevada and Utah ranked warmest on record. In addition to this record warmth, near-record temperatures were widespread across the West. California, Idaho, Wyoming and Arizona each had their second warmest September, with four additional states experiencing a top-five warmest September on record.

For the July-September period, the average contiguous U.S. temperature was 73.0°F, 2.8°F above average, ranking as warmest on record for this 3-month period. Temperatures were above average across most of the contiguous U.S. with record warmth blanketing much of the West. California, Nevada, Oregon, Washington, Idaho, Montana, Wyoming, Colorado and Utah each had their warmest July-September period on record. Seven additional states experienced a top-five warmest event for this three-month period.

For the January-September period, the average contiguous U.S. temperature was 56.8°F, 1.7°F above average, ranking in the warmest third of the record.Temperatureswere above average from the West Coast to the Gulf Coast and from the Gulf to New England.Californiaranked third warmest and Florida ranked fourth warmest on record for this period. Temperatures were near average across parts of the Upper Midwest and northern Plains. 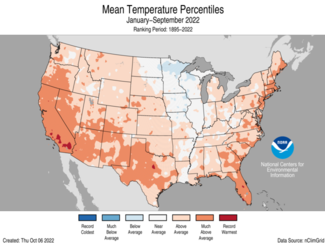 The Alaska statewide September temperature was 43.0°F, 2.4°F above the long-term average. This ranked in the warmest third of the 98-year period of record for the state.Temperatureswere above average across much of the state with portions of southwest Alaska experiencing near-average conditions for the month.

The Alaska January-September temperature was 32.6°F, 2.5°F above the long-term average, ranking in the warmest third of the record for the state.Above-average temperatures were observed across much of the state with portions of the North Slope and eastern interior regions experiencing near-average conditions for this nine-month period. 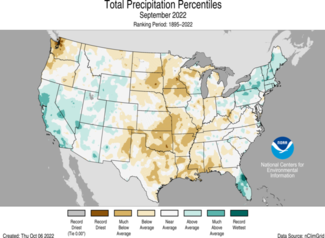 The January-September precipitation total for the contiguous U.S. was 21.53 inches, 1.67 inches below average, ranking in the driest third of the historical record.Precipitationwas above average across parts of the Northeast, Appalachian Mountains, Ohio and Tennessee River valleys, lower Mississippi Valley, and parts of the Great Lakes, Southwest and Northwest. Precipitation was below average across much of the West, central and southern Plains and parts of the East Coast during the January-September period. California ranked driest on record while Nebraska ranked sixth driest and Texas ranked eighth driest for this nine-month period. 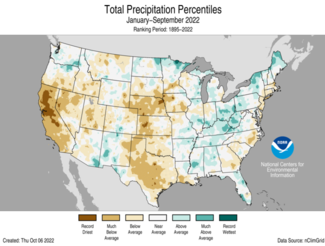 Monthly precipitation averaged across the state of Alaska was 6.76 inches, 2.19 inches above average, ranking as the third-wettest September in the 98-year record.Much of the state was wetter-than-average, with portions of the Aluetians and lower Panhandle experiencing near-average conditions during the month.

The January-September precipitation ranked wettest on record for Alaska, with above-average precipitation observed across all but the northeast Interior and Aleutian regions.

September had several notable storms that brought destruction and flooding to portions of the United States and its territories:

A heatwave settled over the West the first week of September and brought scorching temperatures that set all-time record highs. By September 9, nearly 1,000 heat records were broken.

As of October 5, there were 57 active wildfires in the Pacific Northwest (Idaho, Montana and Oregon) that burned over 660,000 acres to date across the region.

According to the September 27 U.S. Drought Monitor report, about 50.9 percent of the contiguous United States was in drought, up about 5.4 percent from the end of August. Drought conditions expanded or intensified across portions of the Mississippi Valley, central and northern Plains, Northwest, Southeast and parts of the Great Lakes. Drought contracted or was eliminated across portions of the Southwest, southern Plains, Northeast and Puerto Rico. 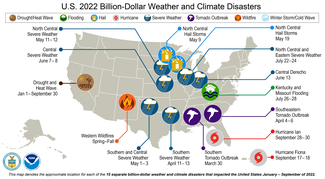 From January through the end of September, the U.S. experienced 15 weather and climate disasters each incurring losses that exceeded $1 billion. These disasters included: 10 severe storms, two tropical cyclones, one flooding event, one combined drought and heat wave and one regional wildfire event.

Six new events have been added since the mid-year update including: Hurricanes Ian and Fiona, the Western wildfires, the Kentucky/Missouri flooding and two severe storm events.

The loss of human life this year from these disaster events exceeds 340 people, with assessments ongoing due to recent hurricane impacts in Florida and Puerto Rico. There were more than 100 lives lost in both Hurricane Ian and from the summer heatwaves in the Western U.S.

Total loss due to property and infrastructure damage to-date is up to $29.3 billion—but this does not yet include the costs for Hurricane Ian, the Western Wildfires and Hurricane Fiona, which may push the 2022 total closer to $100 billion, a total reached in four of the last five years.

This is also a record eighth-consecutive year where the U.S. experienced 10 or more billion-dollar disasters.

The U.S. has sustained 338 weather and climate disasters since 1980 where overall damages/costs reached or exceeded $1 billion (including CPI adjustment to 2022). The total cost of these 338 events exceeds $2.295 trillion.

According to the September 30 One-Month Outlook from the Climate Prediction Center, much of the contiguous U.S. from Florida to the West Coast, as well as much of Alaska, have the greatest chance of seeing above-normal monthly temperatures in October, whereas the greatest chance for below-normal temperatures is projected to occur across portions of the Mid-Atlantic. Portions of the Southwest, Mid-Atlantic and Alaska are projected to have the greatest chance of above-normal monthly total precipitation, while the greatest chance for below-normal precipitation is favored to occur from the Gulf of Mexico to the northern Plains and into New England. Drought is likely to persist across much of the West, central Plains and Hawaii with some improvement and/or drought removal likely along the Mid-Atlantic coastline. Drought development is likely from the southern Plains to the southern Mississippi Valley, as well as across portions of the central and northern Plains.

According to the One-Month Outlook issued on October 1 from the National Interagency Fire Center, southwest California, Hawaii and portions of the southern Plains and Mississippi Valley have above normal significant wildland fire potential during October.

This monthly summary from NOAA National Centers for Environmental Information is part of the suite of climate services NOAA provides to government, business, academia and the public to support informed decision-making. For more detailed climate information, check out our comprehensive September 2022 U.S. Climate Report scheduled for release on October 13, 2022.

Assessing the Global Climate in November 2020

Assessing the Global Climate in June 2020