Assessing the U.S. Climate in October 2022

Drought extends across nearly two-thirds of the Lower 48; Mississippi River at lowest water levels in a decade 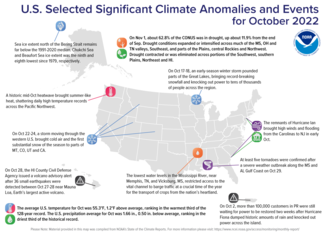 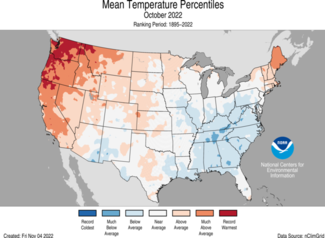 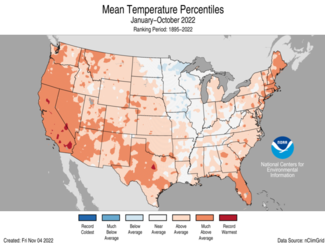 For the January-October period, the average contiguous U.S. temperature was 56.7°F, 1.7°F above average, ranking 13th warmest in the 128-year record. Temperatures were above average from the West Coast to the Gulf Coast and from the Gulf to New England. California ranked third warmest while Oregon ranked sixth warmest on record for this period. Temperatures were near average from the Mississippi Delta to the Upper Midwest.

The Alaska statewide October temperature was 28.8°F, 3.3°F above the long-term average. This ranked in the warmest third of the 98-year period of record for the state. Temperatures were above average across the Panhandle, Aleutians, Yukon Delta, North Slope and parts of the eastern interior while much of the interior experienced near-average conditions for the month.

The Alaska January-October temperature was 32.2°F, 2.5°F above the long-term average, ranking in the warmest third of the record for the state. Above-average temperatures were observed across much of the state with small portions of the North Slope and eastern interior regions experiencing near-average conditions for this 10-month period. 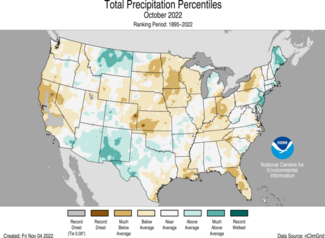 Precipitation varied across the contiguous U.S. On the dry side, Florida ranked eighth driest while California and Minnesota each had their 11th-driest October on record. Conversely, an abundance of precipitation received during the month resulted in New Jersey ranking 10th-wettest on record.

The January-October precipitation total for the contiguous U.S. was 23.19 inches, 2.17 inches below average, ranking 15th driest in the historical record. Precipitation was above average across portions of the Southwest, Mississippi, Tennessee and Ohio valleys as well as the Northeast. Precipitation was below average across much of the West, central and southern Plains and parts of the East Coast during the January-October period. California ranked driest on record while Nebraska ranked fourth driest and Nevada eighth driest for this 10-month period. 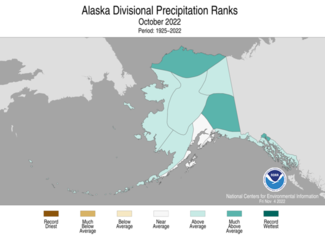 Monthly precipitation averaged across the state of Alaska was 5.57 inches, 1.18 inches above average, ranking as the third-wettest October in the 98-year record. Much of the state was wetter-than-average, with portions of the Aluetians, southern interior and Kenai Peninsula experiencing near-average conditions during the month. 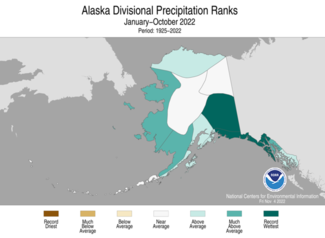 The January-October precipitation ranked wettest on record for Alaska, with above-average to record wet precipitation observed across much of the state. The central and Northeast Interior regions as well as the Aleutians experienced near-average precipitation for this period.

The Mississippi River was at its lowest water levels in a decade, reported near Memphis, TN, and Vicksburg, MS, restricted access to a vital channel to barge traffic at a crucial time of the year for transport of crops from the nation’s heartland. Since early October, the U.S. Coast Guard reported a total of eight barges that have run aground. 144 vessels and 2,253 barges were in a queue to access narrow passages of the river.

On October 1-5, the National Weather Service issued coastal flood alerts along the Mid-Atlantic coast, affecting about 30 million people, as remnants of Hurricane Ian churned off the East Coast. Reports of flooding occurred from the Carolinas to New Jersey. 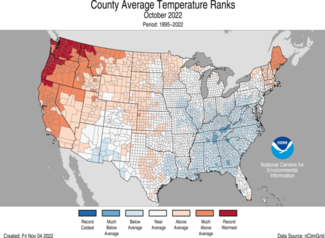 On October 20, Portland, OR, and Seattle, WA, ranked first and second respectively for the worst air quality among the world’s major cities, according to IQAIR, as smoke from a string of wildfires darkened skies across parts of the Pacific Northwest.

On October 22-24, a storm moving through the western United States brought cold air and the first substantial snow of the season to parts of Montana, Colorado, Utah and California.

According to the November 1 U.S. Drought Monitor report, about 62.8% of the CONUS was in drought, up about 11.9% from the end of September. Drought conditions expanded or intensified across much of the Southeast and Mississippi, Ohio and Tennessee valleys, and parts of the Plains, central Rockies, and Northwest. Drought contracted or was eliminated across portions of the Southwest, southern Plains, Northeast and Hawaii.

According to the October 31 One-Month Outlook from the Climate Prediction Center, areas from the Southwest to the Northeast and across western and northern Alaska are most likely to see above-normal monthly mean temperatures in November, with the greatest odds in New England. The best chances for below-normal temperatures are forecast for southeast Alaska, the Pacific Northwest and the northern Rockies. Much of the West, portions of the central Plains as well as northwestern Alaska are favored to see above-normal monthly total precipitation, with the greatest chance near the northern Rockies. Below-normal precipitation is most likely to occur from south Texas to the Gulf of Mexico and the eastern third of the U.S. Drought is likely to persist across much of the West, Plains, and Mississippi and Ohio valleys. Some improvement and/or drought removal is likely across portions of the central and southern Plains, Northwest and Hawaii. Drought development is likely across portions of the Southeast.

According to the One-Month Outlook issued on November 1 from the National Interagency Fire Center, Hawaii and portions of the southern Plains, Midwest, Gulf states, and Mississippi, Ohio and Tennessee valleys have above normal significant wildland fire potential during November.

This monthly summary from NOAA National Centers for Environmental Information is part of the suite of climate services NOAA provides to government, business, academia and the public to support informed decision-making. For more detailed climate information, check out our comprehensive October 2022 U.S. Climate Report scheduled for release on November 14, 2022.

Assessing the Global Climate in August 2022

Globally, August 2022 was the sixth-warmest August in the 143-year NOAA record. The year-to-date (January-August) global surface