According to the December 3, 2019, U.S. Drought Monitor, moderate to extreme drought covers 9.9% of the United States including Puerto Rico, a decrease from last week’s 12.0%. The worst drought categories (extreme to exceptional drought) decreased slightly from 0.2% last week to 0.1% this week.

A couple of very strong upper-level low pressure systems moved in the jet stream flow across the continental United States. They drew in Pacific moisture and generated strong surface low-pressure systems that produced abundant rain and snow across the Southwest to northern Plains. As the surface lows and their Pacific fronts tracked east of the Rockies, they pulled in Gulf of Mexico and Atlantic moisture that fueled above-normal precipitation in the Midwest and Northeast. The upper-level weather systems favored the Southwest, so most of the moisture missed the Pacific Northwest, which ended up with a drier-than-normal week. This pattern produced an upper-level trough over the West and cooler-than-normal temperatures there for the week.

With the storm track east of the Rockies moving northeastward from northern Texas to the Northeast, most of the Gulf Coast and Southeast were left drier than normal. The lows generated a southerly flow across most of the eastern half of the continental United States, which resulted in above-normal temperatures for the week. The net result of this circulation and precipitation pattern was expansion of drought and abnormal dryness in the Pacific Northwest and parts of the Gulf Coast states, and contraction in the Southwest and Mid-Atlantic states.

Abnormal dryness and drought are currently affecting over 85 million people across the United States including Puerto Rico—about 27.3% of the population. 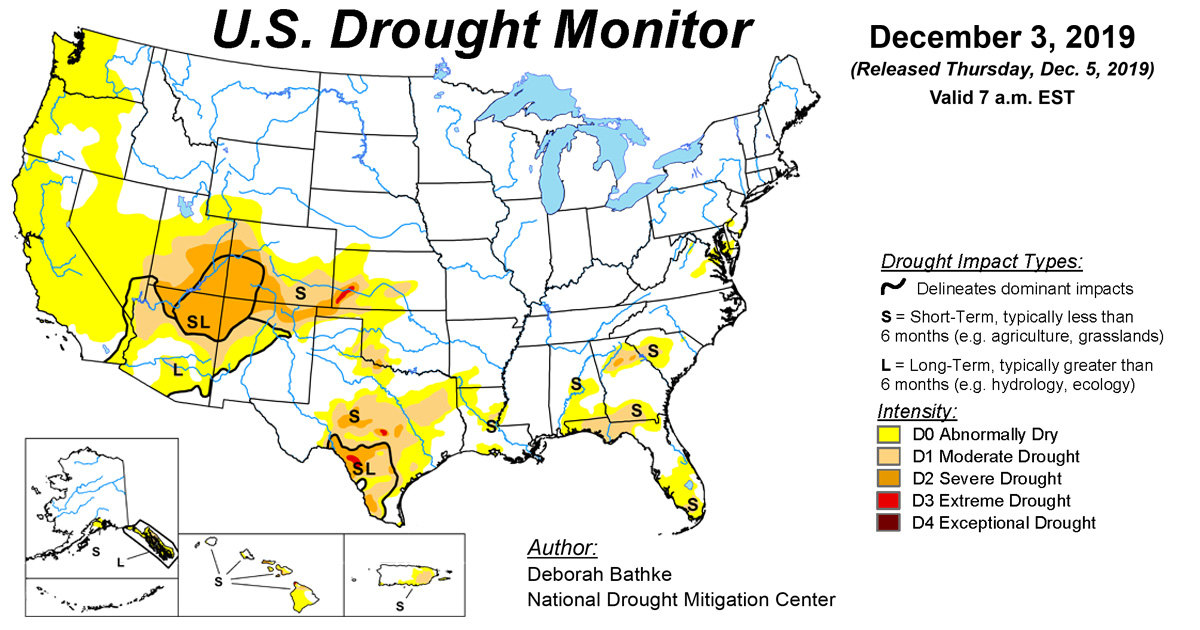