According to the December 5, 2017, U.S. Drought Monitor, moderate to exceptional drought covers 24.3% of the contiguous United States, an increase from last week’s 21.1%. Extreme drought also increased from 1.0% last week to 1.2%. Exceptional drought remained absent from the Lower 48 for an eighth consecutive week.

This U.S. Drought Monitor week began with a zonal circulation pattern in which Pacific weather systems moved across the contiguous United States in a westerly flow. The weather systems brought precipitation to parts of the Pacific Northwest and Ohio to Mid-Mississippi Valleys, but amounts were still below normal for the week. Precipitation that fell across parts of the northern to central Rockies and isolated parts of the Plains was above normal, and a storm system near the end of the week dropped above-normal precipitation across the Upper Mississippi Valley to western Great Lakes. But, for the most part, this weather pattern left much of the Lower 48 very dry.

The zonal pattern also brought above-normal temperatures to most of the contiguous United States, especially the central third, which increased evaporation. The dominance of warmer-than-normal and mostly drier-than-normal weather this week resulted in expansion of drought and abnormal dryness in many parts of the country. The atmospheric circulation began to shift to a strong western ridge and eastern trough pattern at the end of the week, which was setting the stage for warm and dry weather over the West and cold weather over the East in the days ahead.

Abnormal dryness and drought are currently affecting over 128 million people across the United States—about 41.3% of the country’s population. 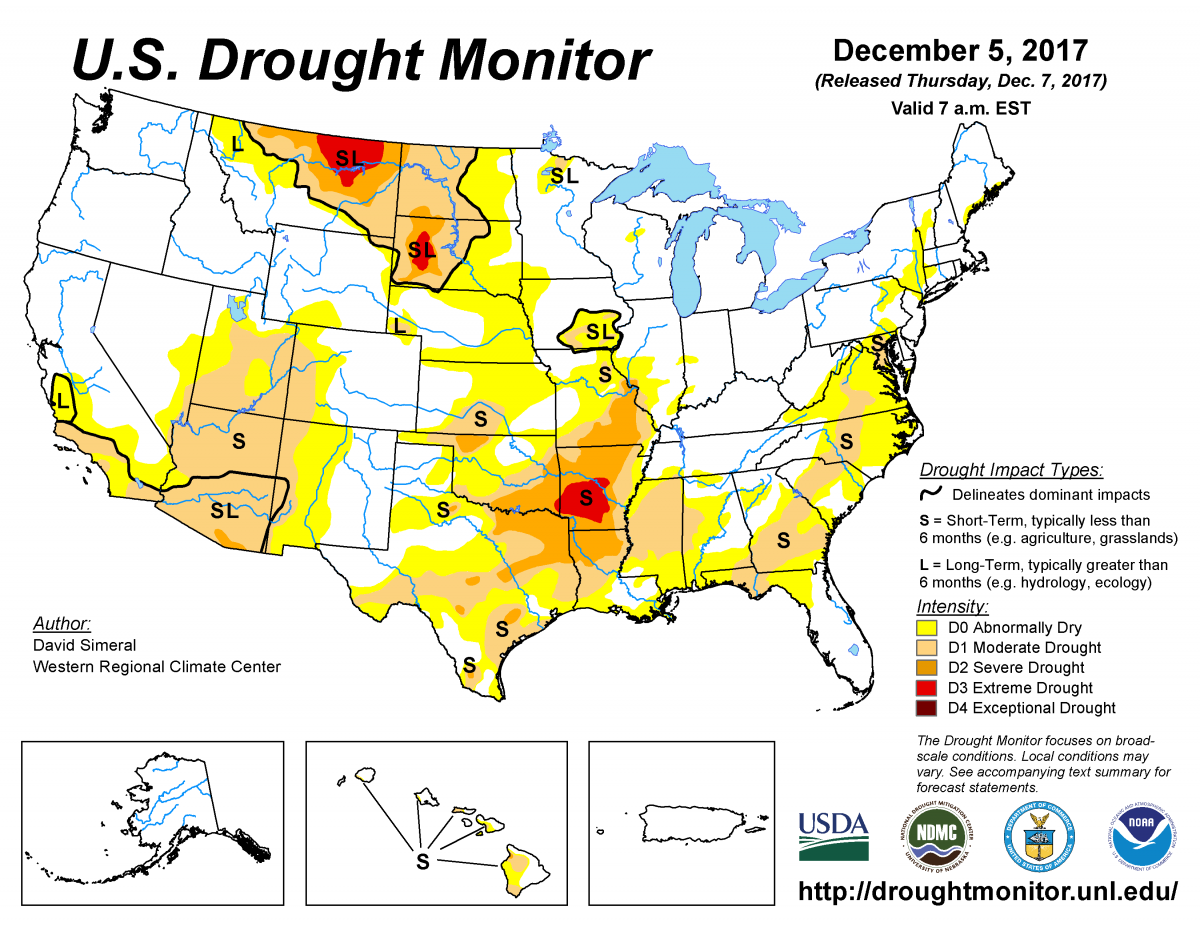 According to the October 3 U.S. Drought Monitor, moderate to extreme drought covers 14.4% of the contiguous U.S.

According to the December 19 U.S. Drought Monitor, moderate to extreme drought covers 26.2% of the contiguous U.S.

According to the January 28 U.S. Drought Monitor, moderate to extreme drought covers 9.2% of the United States including Puerto Rico.

According to the November 19 U.S. Drought Monitor, moderate to extreme drought covers 12.2% of the United States including Puerto Rico.