According to the February 25, 2020, U.S. Drought Monitor, moderate to extreme drought covers 8.5% of the United States including Puerto Rico, an increase from last week’s 8.0%. The worst drought categories (extreme to exceptional drought) stayed the same as last week: about 0.2%.

Strong high pressure over the North Pacific split the jet stream flow over western North America, forcing some Pacific weather systems to move over the Pacific Northwest and British Columbia and others to track across Baja California and the southwestern contiguous United States. This pattern produced very dry weather over California into the Great Basin, a pattern that has persisted for most of the last two months. The southern storms dropped above-normal precipitation over southern Nevada to the Four Corners states, then picked up Gulf of Mexico moisture to spread wet conditions across parts of the southern and central Plains to the Carolina Coast. The southern storm track mostly missed central to southern Florida, where it was drier than normal.

With the northern storms starved of moisture, drier-than-normal conditions prevailed across the Pacific Northwest and much of the northern Plains to Northeast. The upper-level circulation promoted the movement of colder Canadian air southward across the contiguous United States behind cold fronts associated with the surface low-pressure systems, resulting in below-normal temperatures for a large part of the country. Drought and abnormal dryness contracted in the Southwest and central to southern Plains where it was wet, but expanded in the dry parts of the West.

Abnormal dryness and drought are currently affecting over 48 million people across the United States including Puerto Rico—about 15.7% of the population. 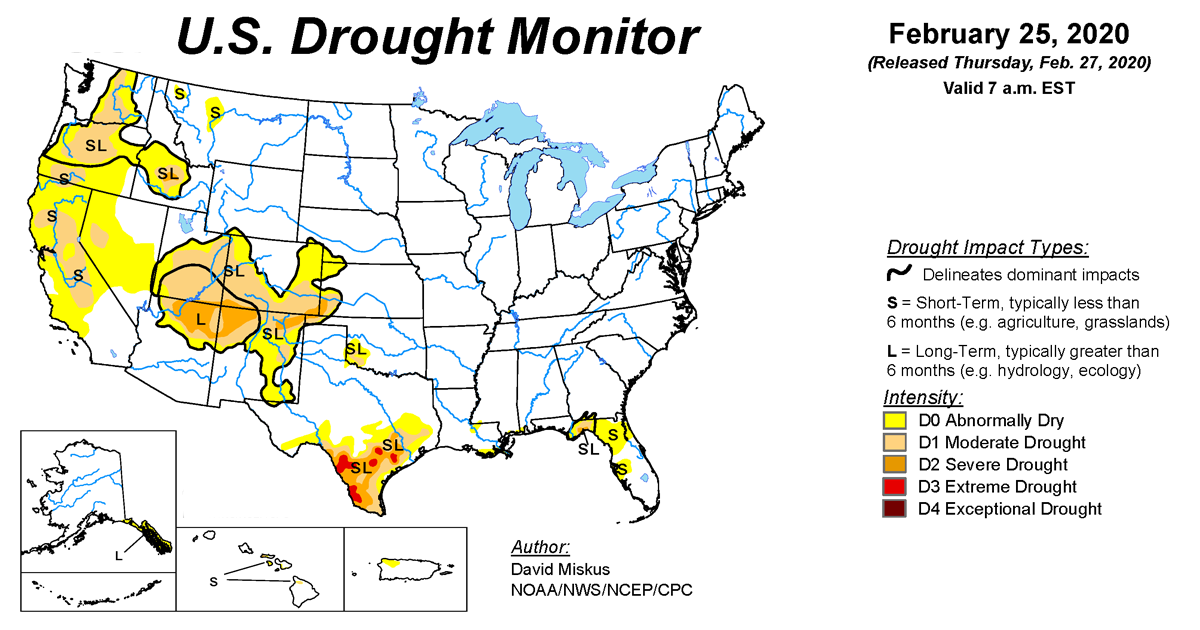 According to the March 3 U.S. Drought Monitor, moderate to extreme drought covers 9.6% of the United States including Puerto Rico.

According to the July 25 U.S. Drought Monitor, moderate to extreme drought covers 11.0% of the contiguous U.S.