A strong ridge of high pressure continued over the western contiguous United States. A potent Pacific weather system migrated through the western ridge. The ridge weakened the system, but it intensified as an upper-level trough when it reached the Mississippi Valley.

Farther east, the Bermuda High pressure system intensified off the Atlantic coast as the week progressed. The High steered Tropical Storm Elsa over the eastern Gulf of Mexico then across the Southeast U.S. and eastern seaboard, where it dropped several inches of rain. The Bermuda High also caused cold fronts to  stall out across the Plains to Midwest. The fronts and their associated surface lows brought cooler-than-normal temperatures and above-normal precipitation to much of the central and southern Plains to Gulf of Mexico and East Coasts. The western ridge kept the weather warmer and drier than normal across most of the West and parts of the Plains.

Drought and abnormal dryness continued to contract in the southern High Plains of New Mexico and western Texas, and drought reduced in intensity or contracted in parts of the northern Plains to Northeast, and Virginia to the Carolinas. Drought or abnormal dryness expanded or intensified in the Pacific Northwest and other parts of the northern and central Plains to Upper Mississippi Valley.  Overall, contraction exceeded expansion, with the nationwide moderate to exceptional drought area decreasing this week. But drought intensified in the worst-hit regions, with the extreme to exceptional drought area increasing this week.

Abnormal dryness and drought are currently affecting over 102 million people across the United States including Puerto Rico—about 33.0% of the population. 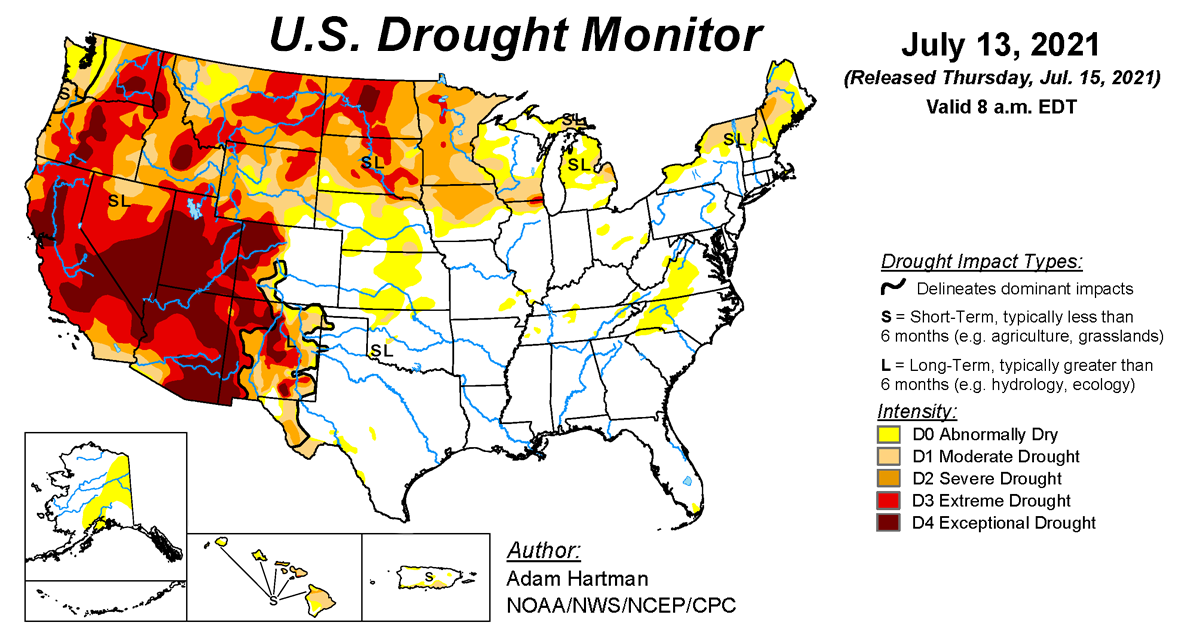 The July average temperature for the contiguous U.S. was 75.7°F, 2.1°F above the 20th century average and was the 10th warmest