Circulation over the contiguous United States underwent a change as high-pressure ridges and low-pressure troughs shifted position. A trough dipped into the eastern contiguous United States then quickly departed, while the ridges flattened as upper-level weather systems migrated through them. The eastern trough sent cold fronts moving across the country east of the Rockies, with the fronts stalling out when they reached the Gulf of Mexico coast. The fronts spread rain across the southern Plains, Northeast, and parts of the Midwest and Gulf Coast.  Ridges kept the weather mostly dry along the West Coast, northern and central Plains, and upper Great Lakes, while monsoon thunderstorms brought rain to parts of the Southwest.

Weekly temperatures averaged cooler than normal with the fronts from the southern Plains to East Coast; in contrast, the ridges kept temperatures warmer than normal from the West Coast to upper Great Lakes. Drought and abnormal dryness continued to contract in the southern High Plains of New Mexico and western Texas, and drought reduced in intensity or contracted in parts of North Dakota, Michigan, and the Mid-Atlantic states. Drought or abnormal dryness expanded or intensified in the Pacific Northwest and other parts of the northern and central Plains to Upper Mississippi Valley.  Contraction almost equaled expansion, with the nationwide moderate to exceptional drought area slightly increasing this week.

Abnormal dryness and drought are currently affecting over 111  million people across the United States including Puerto Rico—about 35.9% of the population. 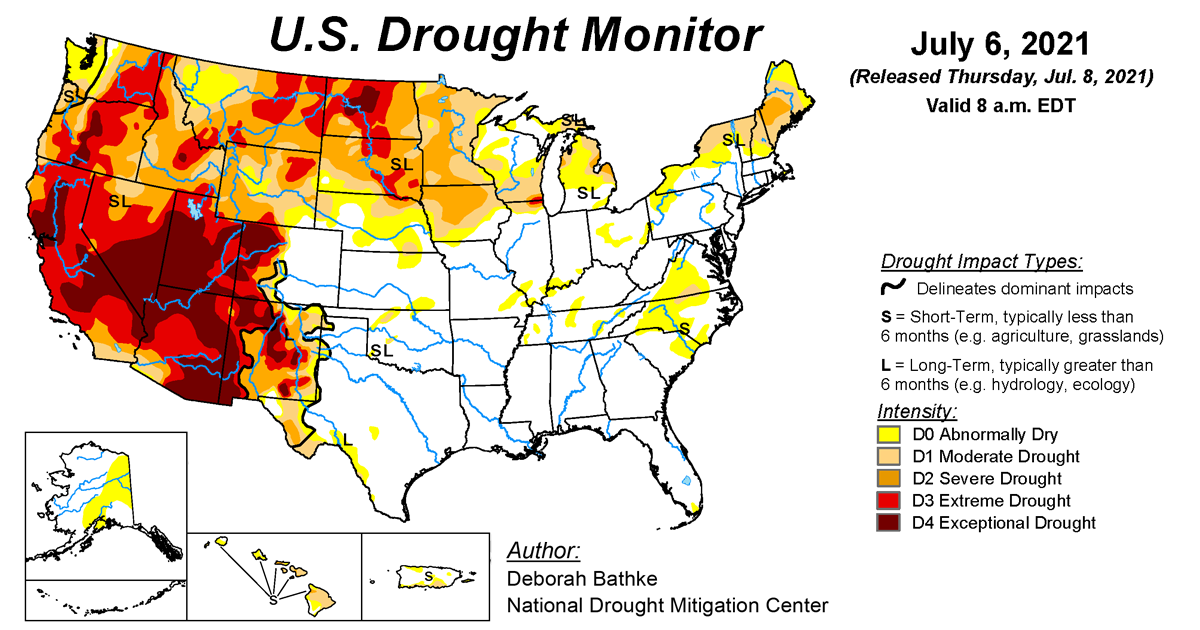