A couple of upper-level weather systems moved across the contiguous United States. The systems moved through an upper-level pattern in which a ridge of high pressure was trying to assert itself. The upper-level lows favored parts of the West and East, with high pressure dominating in the central part of the country. The surface temperature anomaly pattern reflected the battle between those two forces. Temperatures were cooler than normal in parts of the interior West and from the southern Plains to Ohio Valley. Weekly temperatures averaged warmer than normal along the West Coast, in New England and Florida, and especially from the southern High Plains to northern Plains.

The upper-level weather systems dragged surface lows and fronts along with them. The surface and upper-level systems brought above-normal rainfall to the West from Nevada to Montana, from southern Texas to the Ohio Valley, and parts of the central Plains, Southeast, and New England.

Drought and abnormal dryness contracted in parts of the Pacific Northwest, Midwest, Texas, and New England, but expanded in other parts of Texas, New England, and the Midwest, as well as parts of the West and Great Plains. The national drought footprint changed little this week as contraction and expansion nearly canceled each other out.

Abnormal dryness and drought are currently affecting over 88 million people across the United States including Puerto Rico—about 28.4% of the population. 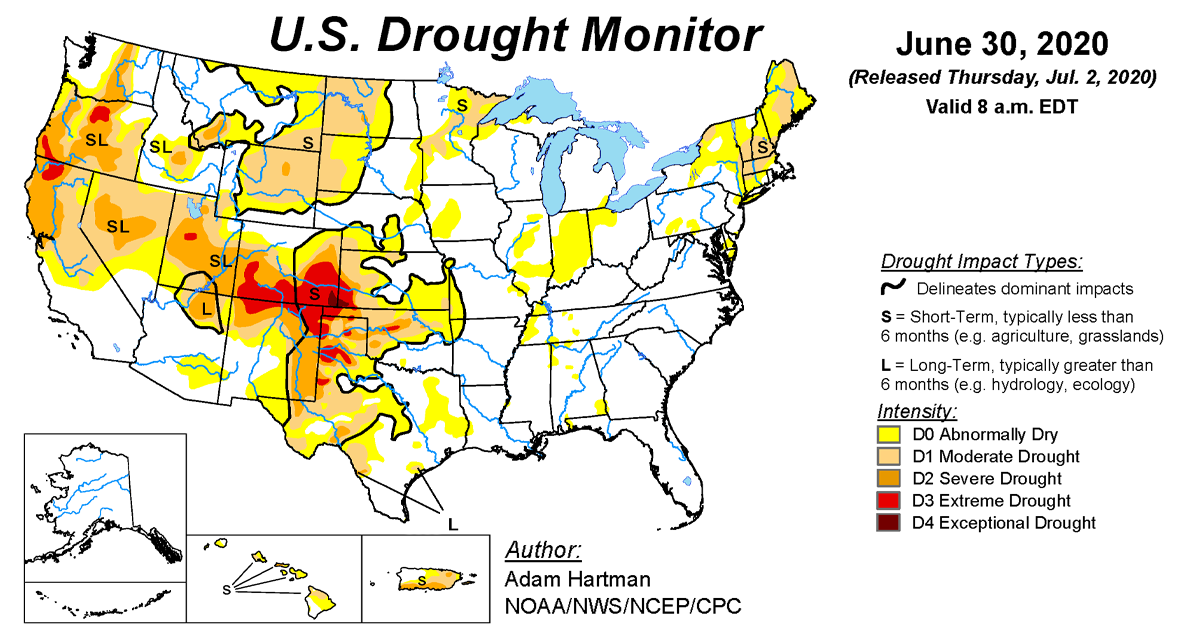 According to the September 4 U.S. Drought Monitor, moderate to exceptional drought covers 29.1% of the United States.

According to the February 28 U.S. Drought Monitor, moderate to extreme drought covers 14.1% of the contiguous U.S.

According to the July 30 U.S. Drought Monitor, moderate to extreme drought covers 6.9% of the United States including Puerto Rico.