According to the March 19, 2019, U.S. Drought Monitor, moderate to extreme drought covers 4.6% of the United States, a decrease from last week’s 6.0%. The worst drought categories (extreme to exceptional drought) decreased slightly from 0.4% last week to 0.3%, with exceptional drought--the worst category--completely eradicated.

The week began with a strong upper-level low pressure system moving out of the Southwest to the Great Lakes, bringing blizzard conditions, Category 2 hurricane-force winds, heavy rain, thunderstorms, tornadoes, and flooding. The heavy snow and blizzard conditions occurred from the central Rockies to northern Plains, where below-freezing air dominated, while surface lows and fronts associated with the system triggered severe weather in the Midwest and Southeast.

Above-normal precipitation fell with this system across the southern to central Rockies and Plains, mid- to upper Mississippi River Valley, and Ohio Valley to Great Lakes, with the heaviest precipitation in the central to northern Plains and across a narrow strip along the Mississippi and Ohio valleys. The clouds, precipitation, and northerly flow behind the system kept temperatures colder than normal across the West to Plains, while a southerly flow ahead of the system brought near and above-normal temperatures to much of the contiguous U.S. east of the Mississippi.

With this one weather system dominating the weather for much of the week, most of the Far West to northern High Plains, Gulf of Mexico coast, and Eastern Seaboard states were drier than normal. The week ended with a dry high-pressure ridge building in the upper atmosphere across western North America. The precipitation in the Southwest to High Plains further contracted drought and abnormally dry conditions, while continued below-normal precipitation increased drought and abnormal dryness in parts of the Pacific Northwest, southern Texas, and coastal Southeast.

Abnormal dryness and drought are currently affecting over 40 million people across the United States—about 13.2% of the country’s population. 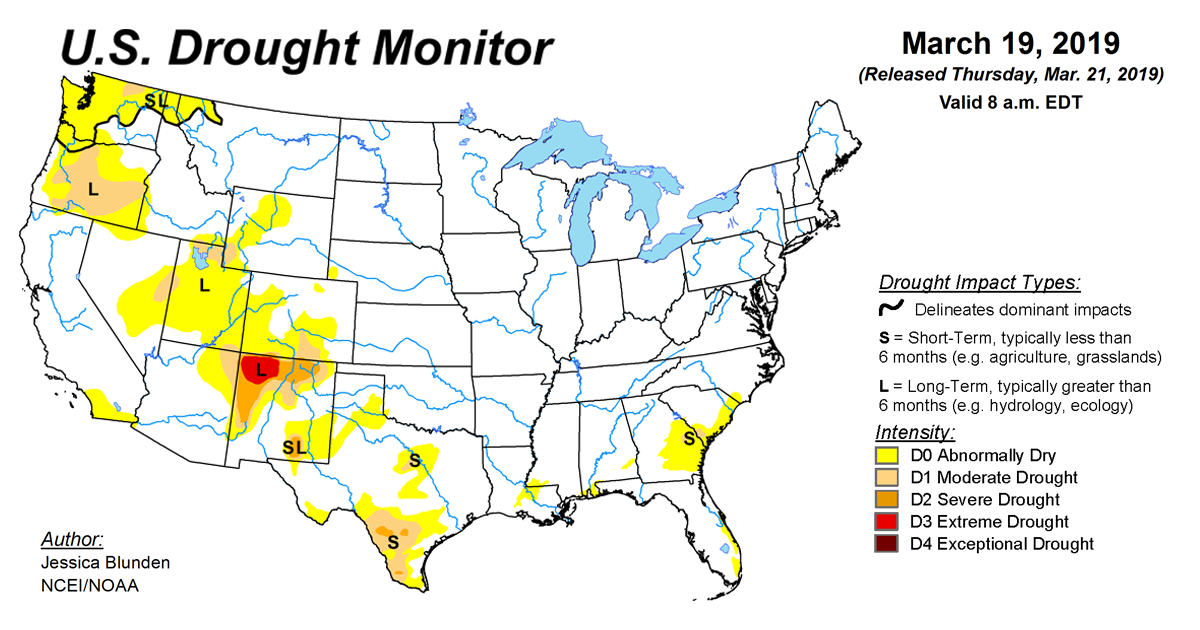 According to the September 7, 2021, U.S. Drought Monitor, moderate to exceptional drought covers 38.2% of the United States

The spring (March–May) average temperature for the contiguous U.S. was 53.5°F, 2.6°F above the 20th century average, driven in