A series of strong upper-level troughs moved across the contiguous United States. Most of the energy stayed to the north, with above-normal precipitation occurring in the Pacific Northwest and Upper Midwest. The Pacific fronts and clouds that accompanied the troughs gave the West a cooler-than-normal week. As the troughs moved out from the Rockies, they pulled Canadian air masses in behind them. These Pacific and Canadian fronts swept across the central and eastern contiguous United States, bringing a cooler-than-normal week to the central and northern Plains to Great Lakes.

The Gulf of Mexico coast and East Coast were mostly dominated by an upper-level ridge, southerly flow, and warmer-than-normal temperatures. Tropical Storm Eta moved out of the Gulf early in the week, crossed Florida, and brushed the Southeast coast before moving out across the Atlantic. Eta spread tropical moisture across the eastern contiguous United States where the moisture encountered a cold front, with the result being above-normal precipitation from Florida to the Mid-Atlantic states and parts of the Northeast.

The week was drier than normal across most of the Southwest and Great Plains, the central to western Gulf coast, and parts of the Northeast. Drought conditions improved where above-normal precipitation fell in the Northwest, Midwest, and Northeast. Drought and abnormal dryness expanded or intensified in the Southwest and southern to central Plains where dry conditions persisted. Drought expansion was more than contraction, so the overall U.S. drought footprint increased this week.

Abnormal dryness and drought are currently affecting over 121million people across the United States including Puerto Rico—about 39.0% of the population 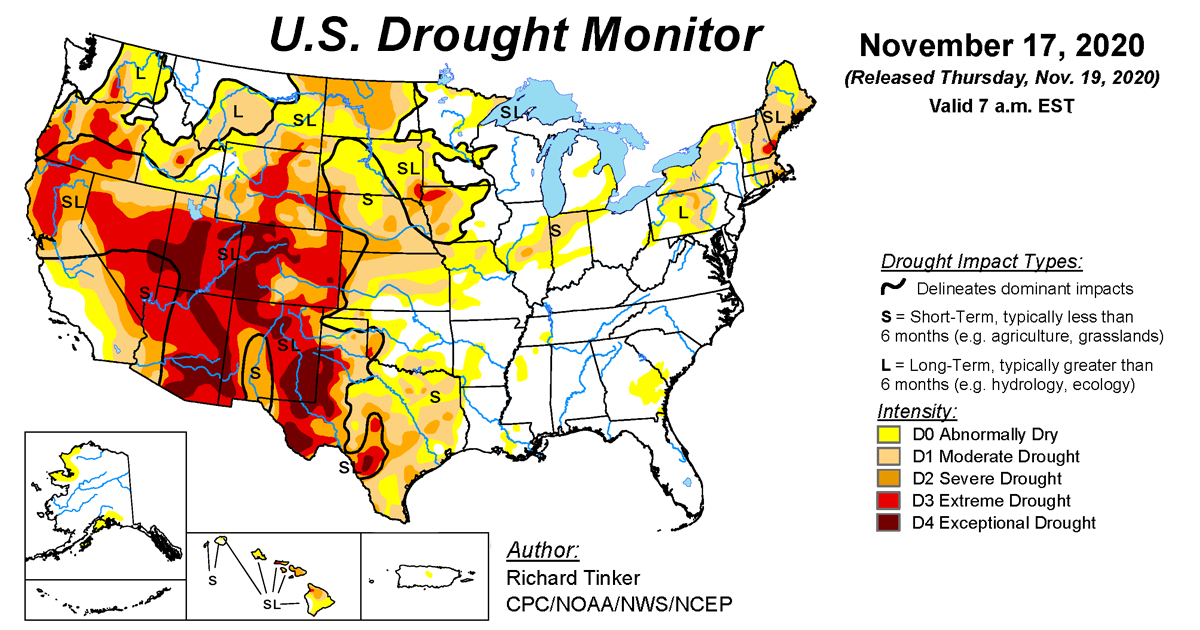 As we head further into the Northern Hemisphere’s spring, many people across the country are ready to put winter—and its cold