According to the November 26, 2019, U.S. Drought Monitor, moderate to extreme drought covers 12.0% of the United States including Puerto Rico, a slight decrease from last week’s 12.2%. The worst drought categories (extreme to exceptional drought) remain the same as last week: 0.2%.

A couple strong upper-level weather systems moved in the jet stream flow across the contiguous United States. One tracked across the northern states, while the other took a more southerly route before moving up the East Coast. A new pair of storm systems was crossing the contiguous United States on Tuesday. The upper-level weather systems generated surface low-pressure centers, and these combined with Pacific fronts to spread above-normal precipitation across the Southwest and central to northern High Plains.

Temperatures averaged above normal from the West Coast to Mississippi Valley, but they were still cold enough to produce widespread blankets of snow across the Rockies to central Plains. The fronts tapped Gulf of Mexico and Atlantic moisture to generate above-normal precipitation across parts of the Tennessee Valley to southern Appalachians and along the coastal Northeast. Colder air behind the fronts kept temperatures below normal across the eastern third of the country.

The week was drier than normal across the Pacific Northwest, much of California, and parts of the northern and southern Plains, eastern Great Lakes, and coastal Southeast. Drought or abnormal dryness expanded in the central to southern Plains, into the Pacific Northwest, and southeast Puerto Rico, while contraction occurred in parts of the Southwest, Southeast, and Texas. On balance, the national drought area contracted slightly to 12.0% of the nation.

Abnormal dryness and drought are currently affecting over 93 million people across the United States including Puerto Rico—about 30.1% of the population. 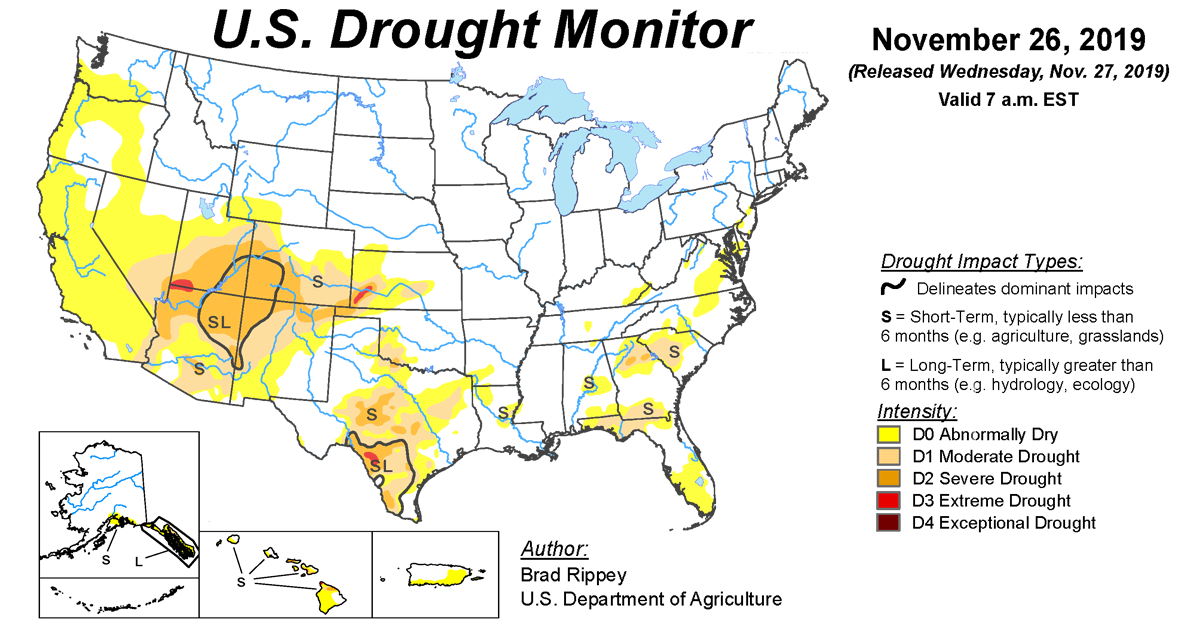 In addition to Drought.gov, you can find further information on the current drought as well as on this week’s Drought Monitor update at the National Drought Mitigation Center. See their recent newsreleases.