A strong upper-level low moved from the southwestern contiguous United States to the Great Lakes early in the week. Its departure allowed a subtropical high-pressure ridge to reassert itself over the southern two-thirds of the contiguous United States by the end of the week. Surface lows and a cold front associated with the upper-level low generated above-normal precipitation across, and brought much colder-than-normal temperatures to, the Southwest, southern to central Plains, and Mid-Mississippi Valley to western Great Lakes.

A lobe of the upper-level ridge maintained its strength over the western contiguous United States throughout the week, keeping the weather dry and helping to maintain widespread wildfires. Another lobe of the subtropical ridge kept the Southeast to Northeast warmer and mostly drier than normal.

Hurricane Sally developed and slowly meandered across the eastern Gulf of Mexico as the week progressed, spreading rain across Florida and nearing the central Gulf coast as the week ended. Drought and abnormal dryness expanded or intensified in the West, northern Plains, Northeast, and parts of the Ohio Valley. The precipitation in the southern and central Plains to western Great Lakes brought relief and contracted drought in those areas.  Contraction almost balanced expansion, with the overall U.S. drought footprint growing slightly this week.

Abnormal dryness and drought are currently affecting over 109  million people across the United States including Puerto Rico—about 35.1% of the population 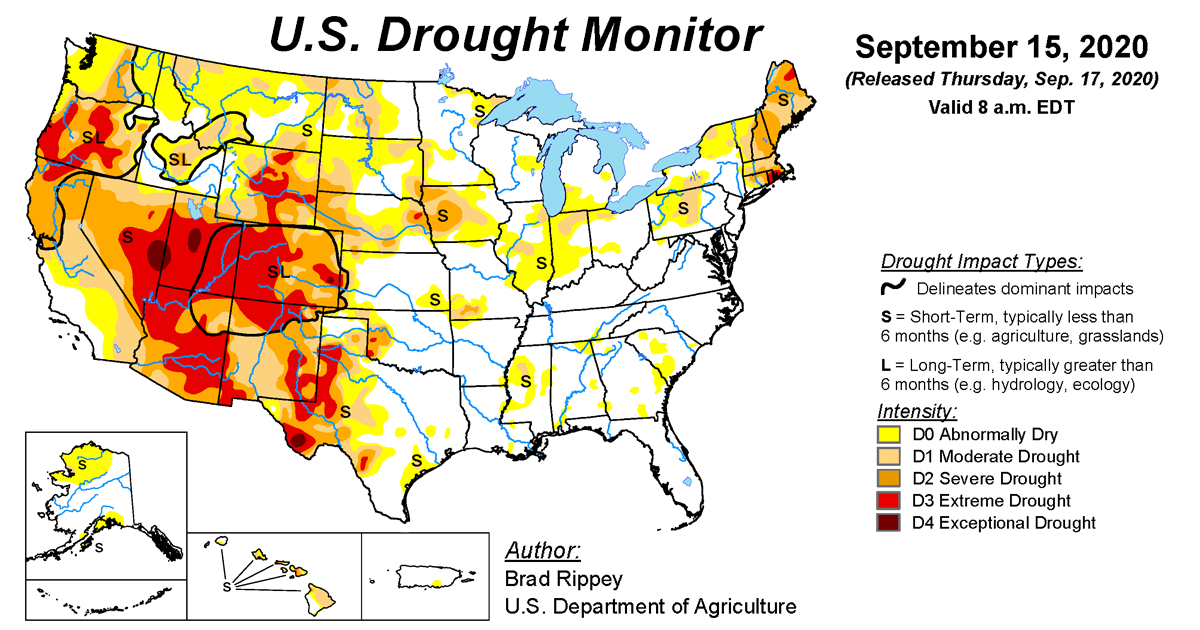 According to the June 6 U.S. Drought Monitor, moderate to severe drought covers 7.8% of the contiguous U.S.