A powerful low-pressure trough developed in the upper levels of the atmosphere over the eastern contiguous U.S. during this U.S. Drought Monitor week. At the surface, the trough was associated with a strong cold front that poured frigid arctic air into the U.S. east of the Rockies. Daytime maximum temperatures in the northern Plains were well below zero degrees Fahrenheit, with minimum temperatures colder than 20 below zero, at the peak of the cold wave. The freezing arctic air spread to the Gulf of Mexico and East coasts, and even breeched the Rocky Mountain chain to reach the Pacific Northwest. Tapping Gulf of Mexico and Atlantic moisture, rain, freezing rain, and snow accompanied the arctic front as it swept east and south.

The northwesterly flow was otherwise dry, so large parts of the Great Plains, Mississippi Valley, and Ohio Valley to Gulf Coast received little to no precipitation. The arctic blast froze soils across much of the Great Plains to Upper Mississippi Valley. Any precipitation that fell was not able to penetrate the frozen ground to increase soil moisture, so much of this region had no change in USDM status.

In reaction to the eastern trough, an upper-level ridge developed over the western CONUS. This kept weekly temperatures near to warmer than normal from California to the Four Corners states, but it also kept much of the West dry. The exception was northern California to the Pacific Northwest and parts of the central and northern Rockies, where Pacific fronts brought areas of rain and snow.

Meanwhile, Hawaii and Puerto Rico had a mostly drier-than-normal week while drier- and colder-than-normal weather dominated Alaska. The deep freeze and dry weather resulted in status quo conditions for much of the country. Drought or abnormal dryness expanded in parts of the Midwest, Colorado, and Puerto Rico where moisture deficits mounted, while contraction occurred in a few areas in the Southeast, East Coast, Wisconsin, Colorado, and Washington where above-normal precipitation fell on unfrozen ground.

Nationally, expansion slightly exceeded contraction, with the nationwide moderate to exceptional drought area increasing a little this week. Abnormal dryness and drought are currently affecting over 173 million people across the United States including Puerto Rico—about 55.6% of the population. 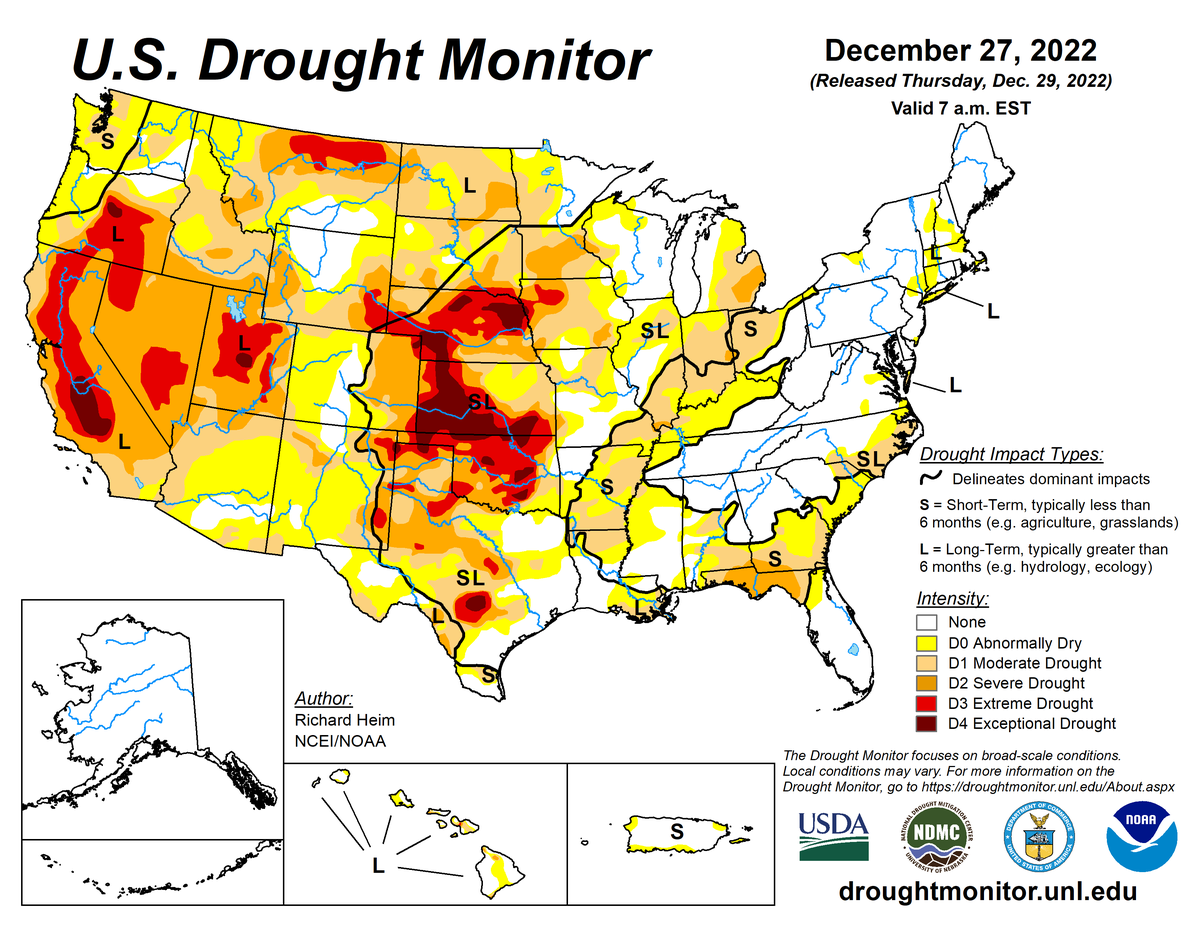 According to the March 21, 2017, U.S. Drought Monitor, moderate to extreme drought covers 16.0% of the contiguous United States

According to the June 29, 2021, U.S. Drought Monitor, moderate to exceptional drought covers 39.5% of the United States