A very strong high pressure ridge in the upper-level circulation was entrenched across the western contiguous United states. Pacific weather systems were forced north into western Canada by the ridge as they moved in the jet stream flow. They dropped southward into the contiguous United States when they passed the Rocky Mountain chain. Cool fronts moved with the systems across the northern Plains into the Midwest, then stalled out across the South when they ran into another high pressure ridge off the Atlantic coast. The western ridge kept all of the West and most of the central to northern Plains and Great Lakes dry throughout the week.

Gulf of Mexico and Atlantic moisture fueled showers and thunderstorms along the fronts, resulting in above-normal precipitation from the southern Plains to Appalachians and Northeast. The North Atlantic high pressure ridge kept the Mid-Atlantic Coast drier than normal, while the Lower Mississippi River valley also had a drier-than-normal week.

Temperatures averaged warmer than normal for the week across most of the contiguous United States, especially in the West where the ridge was strongest. Cooler-than-normal temperatures were the rule across parts of New Mexico and Texas. Drought and abnormal dryness contracted where it rained, especially in Texas, Arkansas, parts of the Northeast, and in Puerto Rico. But expansion or intensification of drought and abnormal dryness occurred in parts of the northern Rockies, central and northern Plains to Upper Mississippi Valley, and Mid-Atlantic Coast. Nationally, contraction exceeded expansion, with the nationwide moderate to exceptional drought area decreasing this week.

Abnormal dryness and drought are currently affecting over 174 million people across the United States including Puerto Rico—about 56.0% of the population. 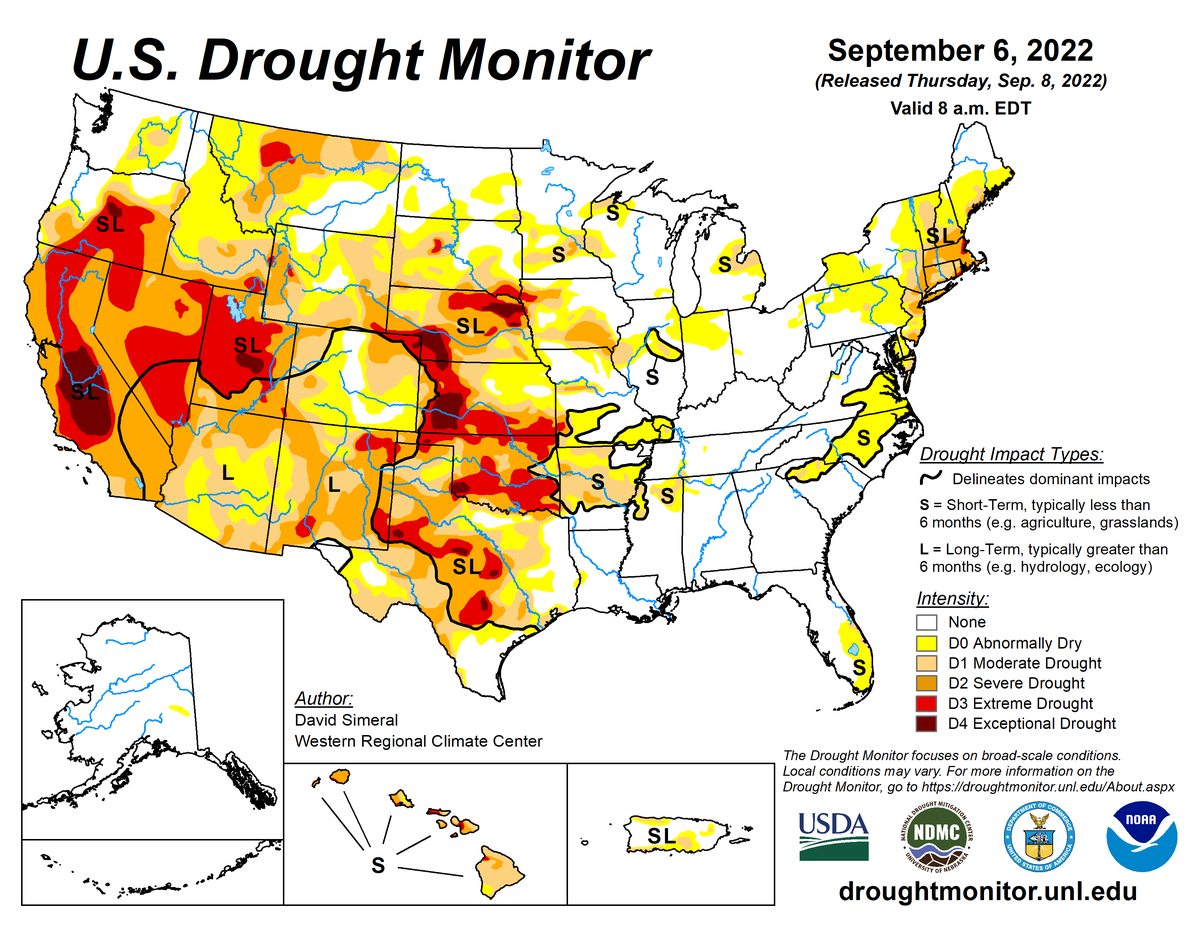 The October nationally averaged temperature was 55.7°F, 1.6°F above the 20th century average, and ranked among the warmest third

According to the January 29, 2019, U.S. Drought Monitor, moderate to exceptional drought covers 14.3% of the United States, a

According to the August 14, 2018, U.S. Drought Monitor, moderate to exceptional drought covers 30.7% of the United States, an