What Have We Learned from Paleoclimatology?

To understand and predict changes in the climate system, we need a more complete understanding of seasonal-to-century scale climate variability than can be obtained from the instrumental climate record alone. So, several decades ago, paleoclimatologists began constructing a blueprint of how Earth's temperature changed over the centuries before 1850 and the widespread use of thermometers.

Out of this initial work emerged a view of the past climate based on limited data from tree rings, historical documents, sediments, and other proxy data sources. Today, many more paleoclimate records are available from around the world, providing a much improved view of past changes in Earth's temperature.

A Perspective on Climate Change

From the paleoclimate perspective, climate change is normal and part of Earth's natural variability related to interactions among the atmosphere, ocean, and land as well as changes in the seasonal amount of solar radiation reaching Earth. The geologic record also includes a variety of evidence for large-scale climate changes. For example, warm-climate vegetation, dinosaurs, and corals living at high latitudes about 90–120 million years ago indicate globally warm conditions at that time.

A Perspective on Glacial Cycles

Paleoclimate data has also shown that glacial cycles, a pattern of ice ages and glacial retreats lasting thousands of years, dominated the climate of the past two million years. During the peak of the most recent glacial cycle—about 21,000 years ago—massive terrestrial ice sheets extended over large parts of North America and Europe, reaching as far south as New York, Chicago, and Stockholm. And, at that time, the global temperature was about 9°F colder than it is today. 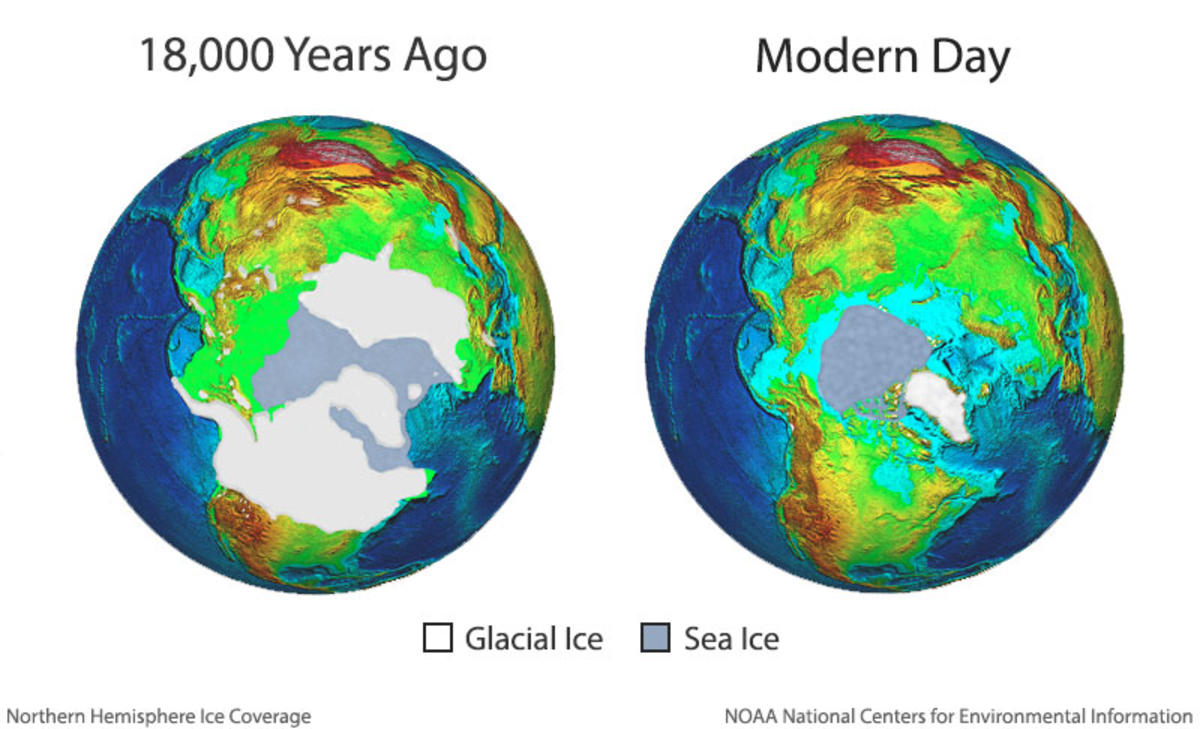 Since the end of the last ice age over 10,000 years ago, the planet has undergone smaller changes in climate. Warming during medieval times and cooling during the “Little Ice Age” a few centuries ago dominated the last millennia.

A Perspective on Changes in the Atmosphere

Paleoclimatology also puts recent changes in the atmosphere and climate into perspective. For example, gas bubbles trapped in ice cores tell us that atmospheric carbon dioxide levels are now significantly higher than they have been over at least the last 800,000 years.

A Perspective on Global Temperature

Paleoclimate records from multiple proxies also indicate that global temperatures, which have risen with atmospheric carbon dioxide levels, are now higher than at any point in the last 1,500 years. Our planet has likely not been as warm as it is today since over 5,000 years, when changes in Earth’s orbit increased temperature in some parts of the world.

What is especially remarkable is that the long-term cooling trend that has existed over the past 5,000 or more years has reversed abruptly. And, global temperatures have risen from the coldest to near the warmest levels of our current interglacial period within the last century.

Finding the paleoclimate data you need among the thousands of studies we make available online just got easier. With our new web

How Can Ice Teach Us About Climate?

What’s the first thing that comes to mind when you hear Antarctica or Greenland? If you’re like most people, the answer is

Paleoclimatology is the study of ancient climates, prior to the widespread availability of instrumental records. Similar to the

How Can Tree Rings Teach Us About Climate?

Have you ever counted the rings on a stump to find out how old a tree was? If you have, you’ve already unlocked the secret to