There’s something magnetic about glaciers. In A Tramp Abroad,  Mark Twain wrote, “[....]a man who keeps company with glaciers comes to feel tolerably insignificant by and by.” Their sheer size and immensity draw people to visit, explore, and study these unique formations year after year. But glaciers are much more than meets the eye. They provide a window into the past that scientists hope will help predict our future.

What is a Glacier?

Glaciers are made up of fallen snow that, over many years, compresses into large, thickened ice masses. Over time and as more snow falls, if the compressed snow doesn’t melt, the snow eventually becomes glacial ice, transforming into a glacier.

Due to their sheer mass, glaciers flow like very slow rivers. The immense weight of a thick layer of ice, or the force of gravity on the ice mass, causes glaciers to move at a literal glacial pace. The top of the glacier moves faster than the underside because the underside is slowed by the friction created as it slides along the ground’s surface.

Glaciers may slowly advance or retreat, depending on climate and weather. Greater amounts of snowfall accumulating over a long enough time will add to the mass of a glacier, causing it to advance. Warmer temperatures over a long enough time will result in more of the glacier ice and snow on the glacier melting, causing it to retreat. For most glaciers, retreating and advancing are very slow occurrences, taking years or decades to show any significant effect.  Some glaciers have retreated rapidly, with movement visible over a few months or years.

Some glaciers may surge, racing forward at several meters per day for weeks or even months. The Hubbard Glacier in Alaska surged at the rate of 10 meters (32 feet) per day in 1986. In only two months, the glacier dammed water in the Russell Fjord and created a lake. 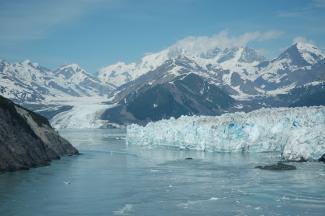 The Hubbard Glacier in Alaska surged so quickly that it created a lake in the Russell Fjord.

Today, glaciers occupy about ten percent of the world’s total land area, with most located in polar regions like Antarctica, Greenland, and the Canadian Arctic. Glaciers can be thought of as remnants from the last Ice Age, when ice covered nearly 32 percent of the land and 30 percent of the oceans.

Scientists know that within the past 750,000 years, there have been eight Ice Age cycles, separated by warmer periods called interglacial periods. Currently, Earth is in an interglacial period, but we are nearing its end. We only have a few thousand years before the next Ice Age is due. But fear not, this ebb and flow is all part of the normal cycle for planet Earth.

Glaciers and Icebergs: What’s the Difference?

There’s often confusion regarding what is a glacier and what is an iceberg. While a glacier is a relatively permanent ice formation on land, an iceberg is a comparatively short-lived free-floating body of ice on water. Icebergs typically form when chunks of ice break off of a glacier.

Because icebergs can be quite large, they still can take many months to melt. Icebergs that break off or “calve” can drift quite far from their point of origin, posing a significant risk to commercial shipping. One of the more publicized dangers from an iceberg came from the sinking of the Titanic in 1912. 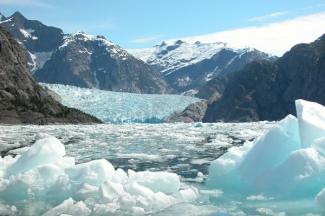 A glacier (background) is pictured next to icebergs (foreground) that have broken off and are floating in the ocean.

Glacial ice can range in age from several hundred to several hundreds of thousands of years old, making it an invaluable tool for scientific research. To see a long-term climate record, scientists drill and extract ice cores from glaciers and ice sheets. These cores provide continuous records of year-by-year information about our past climate.

Glaciers preserve bits of atmosphere from thousands of years ago in tiny air bubbles trapped within the ice cores. These can reveal past atmospheric conditions, temperature variations, and types of vegetation. This is one way scientists know that there have been several Ice Ages. Past eras can be reconstructed, showing how and why our climate has changed and how it might change in the future.

Scientists have been asking the questions “How much does our atmosphere naturally warm up between Ice Ages?” and “How does human activity affect climate?” Because glaciers respond to temperature changes, direct glacier observations help answer these questions. Since the early twentieth century, with few exceptions, glaciers around the world have been retreating at unprecedented rates. Scientists attribute this massive glacial retreat to the Industrial Revolution, beginning around 1760 and continuing still today. It is the increases in greenhouse gas concentrations and their marked rate of change that are largely attributable to human activities.

The WGI contains information for over 130,000 glaciers. Whether you’re looking for glaciers by name, geographic location, area, length, orientation, elevation, or classification, the WGI will most likely have what you’re looking for. If you want more glacial information, head to the GLIMS for measurements of glacier geometry, glacier area, snowlines, supraglacial lakes and rock debris, and other glacial attributes.

If stunning visuals are more to your taste, check out the Glacier Photograph Collection. Over 15,000 photos constitute an important historical record of many glaciers, as well as a data collection of interest to those studying the response of glaciers to climate variabilities.

Worthy of a mention on its own is the Repeat Photography of Glaciers special collection found within this database. This collection displays photographs of the same glacier, taken from the same vantage point and at the same time of year, but taken many years apart. These photographs can provide striking visual evidence of glacial changes over the last century, as most glaciers around the world have retreated at an unprecedented rate.

The photo below is the Muir Glacier, Alaska, photographed on August 13, 1941, and again on August 31, 2004. In the span of just over 60 years, the glacier retreated by more than seven miles (12 kilometers) and thinned by more than 800 meters (2,600 feet). Ocean water has since filled the valley, replacing the ice of Muir Glacier. The glacier’s absence now reveals scars where glacier ice once scraped high up against the hillside. It is truly a testament to the dramatic climatic changes taking place over the past century and their impact on glaciers.

In a span of just over 60 years, the Muir Glacier in Alaska retreated by more than seven miles.

Years with heavy seasonal snow and extreme snowstorms continue to occur with great frequency as the climate has changed. The

Did you know that NCEI provides an easy and quick way to search for temperature, precipitation, and snowfall station records set

Assessing the Global Climate in January 2017