During the summer months, many areas in the United States approach their highest temperatures for the year. To give you a better idea of the warmest time of year for your area, NCEI has created these “Warmest Day of the Year” maps for the contiguous United States, Alaska, Hawaii, and Puerto Rico. The maps are derived from the 1981–2010 U.S. Climate Normals, NCEI's 30-year averages of climatological variables including the average high temperature for every day. From these values scientists can identify which day of the year, on average, has the highest maximum temperature, referred to here as the “warmest day.” 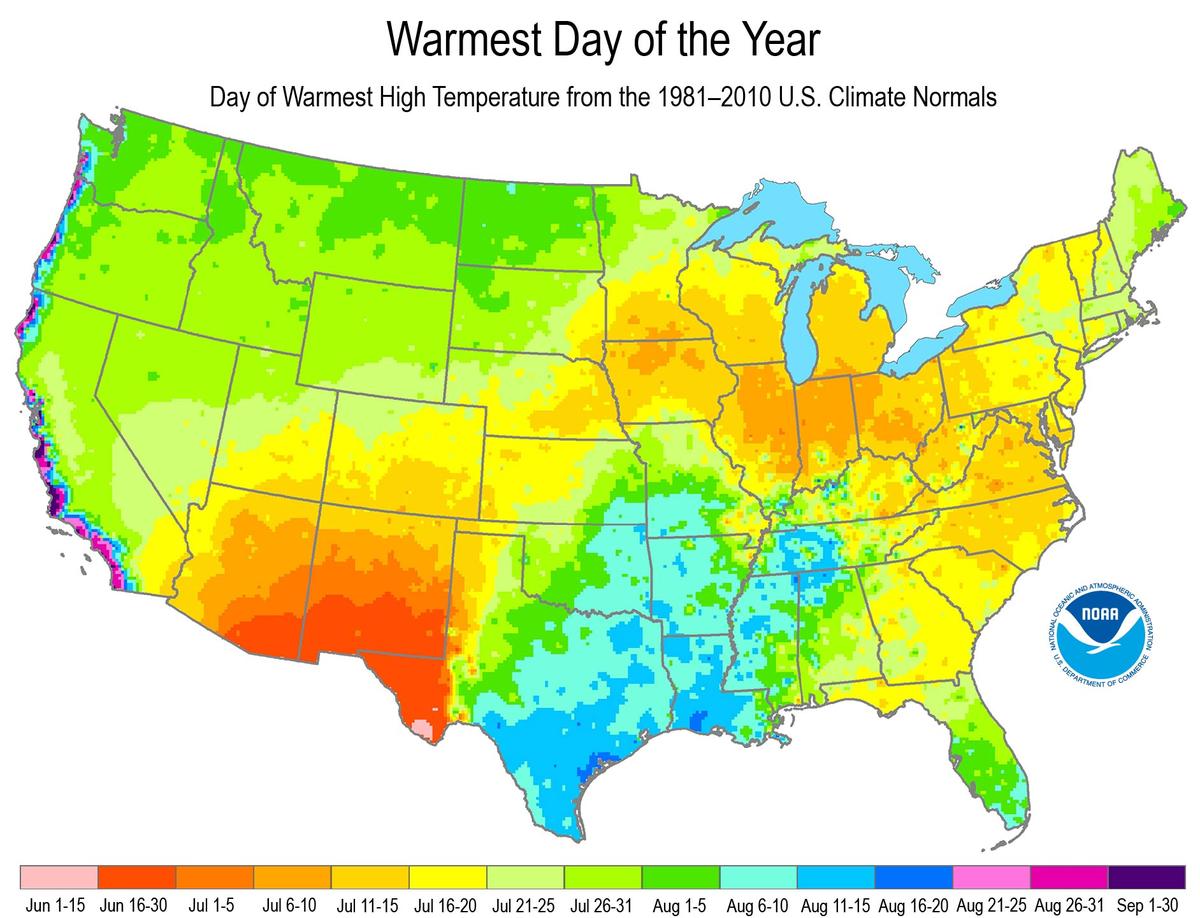 Although the amount of solar radiation reaching Earth peaks at the summer solstice on June 21 in the Northern Hemisphere, temperatures for most of the United States tend to keep increasing into July. The temperature increase after the solstice occurs because the rate of heat input from the sun during the day continues to be greater than the cooling at night for several weeks, until temperatures start to descend in late July and early August.

But, this isn't the case everywhere! The “Warmest Day of the Year” maps show just how variable the climate of the United States can be. For instance, the June values in New Mexico and Arizona reflect the North American Monsoon, a period of increased rainfall affecting the U.S. Southwest. Because these areas tend to be cloudier and wetter from July through September, the temperature is highest on average in June. Similarly, the persistence of the marine layer along the Pacific Coast leads to cool temperatures in early summer with the warmest days on average later in the season.

Temperature Normals are important indicators that are used in forecasting and monitoring by many U.S. economic sectors. The 30-year averages will be updated in 2021 to encompass the 1991–2020 period of record. Knowing the probability of high temperatures can help energy companies prepare for rising electricity demand and help farmers monitor heat-sensitive crops. They are also useful planning tools for the healthcare, construction, and tourism industries. You may want to check the Normals before planning your next event or vacation.

While the map shows warmest days of the year on average throughout the United States, this year's actual conditions may vary widely based on weather and climate patterns. For prediction of your actual local daily temperature, and to see how it matches up with the Climate Normals, check out your local forecast at Weather.gov.

According to the September 25 U.S. Drought Monitor, moderate to exceptional drought covers 25.1% of the United States.

In honor of Valentine’s Day, we take a look at typical February climate conditions and Climate Normals for several lovely locations.