The NCEI Marine Microplastics product provides access to aggregated global data on microplastics in marine settings. Additionally, the product gives researchers and others access to information on ocean currents to enable a unified understanding of the global microplastic problem. The information is used to improve water quality and protect Earth's ecosystem, especially coastal ecological habitats such as salt marshes and mangrove forests that help recycle nutrients, serve as breeding grounds for fingerlings, and permanent homes for oysters and other coastal marine wildlife. This product can also be used to validate remote sensing technologies that identify and characterize microplastics from space.

The Microplastics Application has information on the occurrence, distribution, and quantity of global microplastics. Data is available in CSV, NetCDF, and ArcGIS formats. A GIS-based map shows the global distribution of data submitted. The map within the application allows users to download the entire dataset, or subset of data for a particular geographical region and time period. See the Help page for more information about using the interface, accessing data, etc. 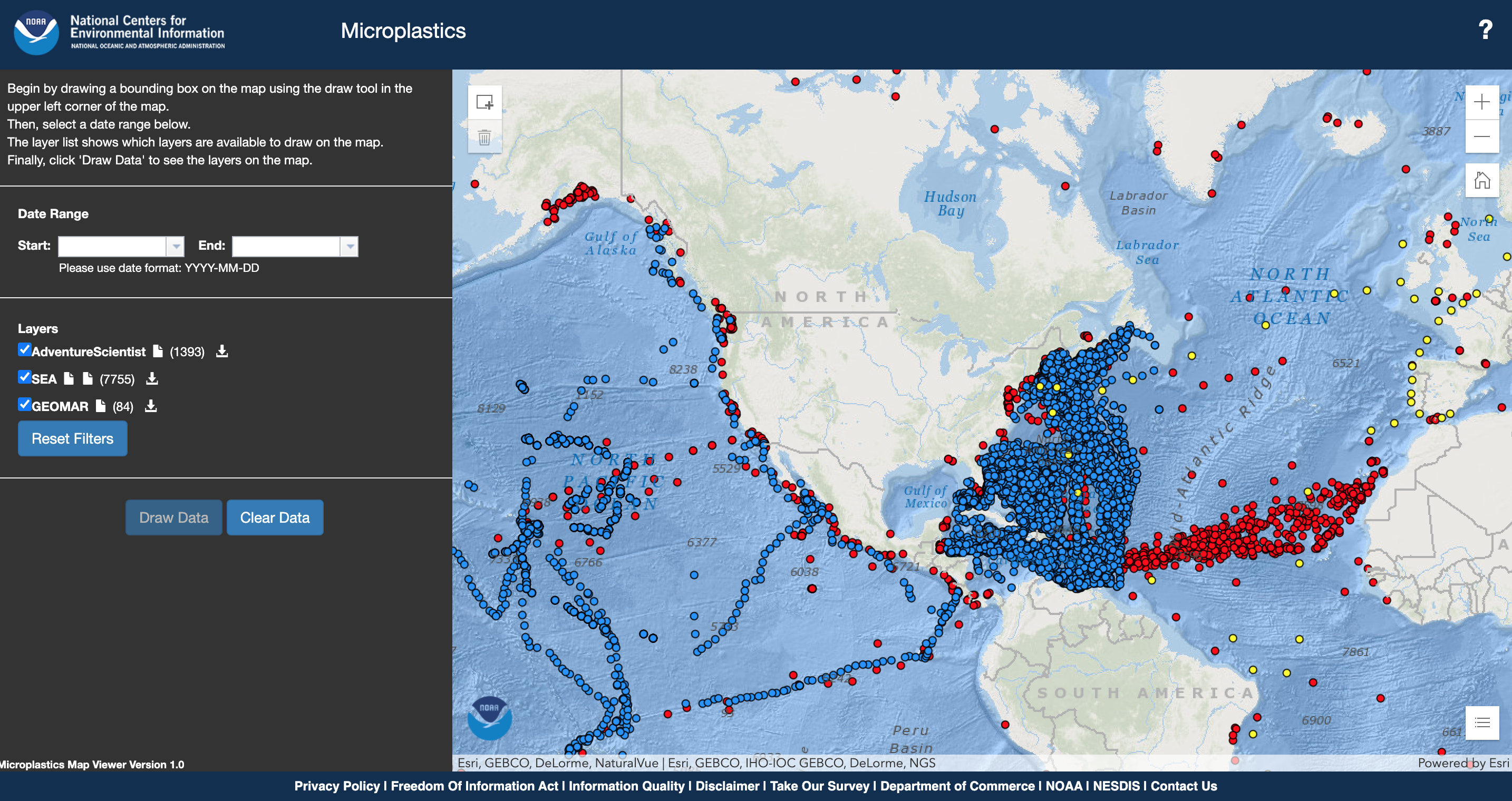 This product is a publicly available collection of marine microplastics data from around the world. The database is a repository for multiple datasets of marine microplastics. The data are aggregated, archived, and accessible to users in a consistent and reliable manner. Contributors from various research cruises and field work provide the data. This is a growing database and data collectors are encouraged to submit findings to NCEI for inclusion in the Marine Microplastics application.

Data from the Volvo Ocean Race 2017/2018 Turn the Tide on Plastic and AkzoNobel by GEOMAR Kiel microplastics project.

These data are provided by the courtesy of the following individuals and organizations:

Microplastics are plastics that are smaller than 5 mm (.20 in). While microplastics primarily come from plastic materials like bottles and bags, they also enter ecosystems from clothes and cosmetics. Microplastics are pervasive throughout the environment, and can be found in oceans, rivers, estuaries, lakes, the atmosphere, beaches, sea ice, and sediments. Microplastics usually originate on land and then are carried by rivers and wind to oceans, where they become part of the global ocean circulation system. Once in the ocean, fish and other marine organisms ingest microplastics. This can kill those organisms or become part of the food chain for fish and ultimately humans. The increase in microplastics pollution is a growing concern, affecting coastal communities, marine ecosystems, marine life, human health, and the economy.

Marine microplastics are found from the sea surface to seafloor and sediments. In addition to harming aquatic organisms and ecosystems, microplastics pollution affects economies by increasing clean-up costs and contributing to the decline of fisheries and coastal tourism. Seafood is the main source of animal protein for approximately 20% (1.4 billion people) of the global population. Marine microplastics endanger this source of protein by reducing the efficiency and productivity of aquaculture and commercial fisheries through fish mortality and entangled fishing gear.

The microplastics database would not exist without the help of data contributors. This is a new, evolving project that needs community support to grow. Submitting your microplastic data to NCEI will make your research more visible and accessible, and help quantify and stop the global spread of plastic particles.

To submit your microplastic data to the archive, please contact NCEI at ncei.info@noaa.gov.

NCEI has released the first-of-its-kind global microplastics database. This database collates microplastic data from across the