Earth's magnetic field is constantly changing, and while large-scale changes, such as a complete reversal of the magnetic field, happen over several thousand years, smaller changes over shorter periods affect all forms of navigation. In aviation, Earth's changing magnetic field affects airport operations and causes runway names to change.

For example, the Fairbanks International Airport in Alaska renamed runway 1L-19R to 2L-20R in 2009 when magnetic north shifted enough to mandate a change. And the airport operators know—from NCEI’s World Magnetic Model (WMM) and other sources—that they'll likely need to update the name again in 2033, according to a spokeswoman for the airport. That model, developed by NOAA and its partners, provides guidance for many who need accurate navigation tools.

What is the World Magnetic Model?

The WMM is a data-based, mathematical representation of Earth’s large-scale magnetic field used for navigation, orientation, and heading references. It’s critical to virtually every smartphone’s map apps and is the standard navigation tool for the Federal Aviation Administration (FAA) as well as the U.S. Department of Defense, North Atlantic Treaty Organization (NATO), and more. NCEI and the British Geological Survey produce an updated model every five years.

“Several agencies use the World Magnetic Model to update their navigation aids with our software and online calculators,” says NCEI’s Arnaud Chulliat, a scientist affiliated with the Cooperative Institute for Research in Environmental Sciences (CIRES), who leads the project.

WMM Created from Many Data Sources

The data that go into the WMM come from many sources, primarily satellite observations and a global network of 120 magnetic observatories. Satellites help scientists separate various contributions to the magnetic field, according to Chulliat. Earth’s core contributes to the magnetic field, but so do magnetic rocks in Earth’s subsurface and electrical currents in the atmosphere and beyond.

“We’re looking for the signal from Earth’s core,” Chulliat says. “To get that, we combine satellite and ground signals into the model and use various mathematical and modeling techniques to separate core from non-core signals.”

Why Does the WMM Need Updating?

Earth’s inner core is solid, while the outer core is liquid. Both are primarily made of iron and nickel; flows within the outer core generate 95 percent of the geomagnetic field, including the slow, secular variation that is tracked by the WMM.

Fluxes in the outer core trigger unpredictable changes in Earth’s magnetic field. Over the past few decades, the North magnetic pole has been drifting toward Siberia at an irregular speed, and that affects navigation accuracy. Updates to the WMM ensure accurate magnetic field declination—the difference between true north and magnetic north.

Earth’s inner core is solid, while the outer core is liquid and can trigger changes in the magnetic field. Courtesy of European Space Agency and ATG/Medialab.

NCEI scientists and their partners continuously survey the magnetic field to precisely map the present field and its rate of change and then extrapolate changes into the future.

By FAA rules, runways are numbered according to the points on a compass, from 1–36, reflecting the magnetic compass reading to the nearest 10 degrees and dropping the last digit. In addition, runway numbers are connected to the direction a plane is traveling—so while on a handheld compass, south corresponds to 180 degrees, or 18 in runway terms, if a plane is on runway 18–36, then it’s heading north, according to the designation on a compass with the runway overlay (see image below, courtesy of CIRES). Large airports have other designators, too, such as L or R for the left or right runway in a parallel pair. For pilots and other navigators, keeping runway names updated is crucial to accurately reflect the magnetic heading. 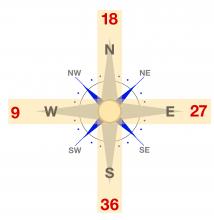 Take Denver International Airport (DIA) runway 17L–35R, which is currently magnetically oriented at 172.5 degrees, according to a DIA spokesman. When magnetic shifts nudge that bearing by another 4 degrees to 176, that runway will become 18L–36R.

“The declination has changed just over 2.5 degrees ... since Denver opened,” said former airport spokesman Heath Montgomery. “Declination is changing by 0.1 degree per year, so about another 30 years or more until the next change at the current rate.”

Runway names are alphanumeric based on compass points. Courtesy of Wikimedia Commons.

Magnetic shifts happen faster the closer to the poles you go, so airports at high latitudes must make more frequent adjustments than airports closer to the equator. For Fairbanks International Airport, for example, the interval of change is roughly every 24 years.

The overall goal for all navigational aids, according to guidelines in FAA Order 8260, is to keep the magnetic variation figure used for guidance as closely aligned to the current computed value as modeled by the WMM, within 1 degree, plus or minus.

The WMM team consults regularly with FAA employees who use the model to update runways and other navigation systems. “The FAA uses our model to determine the magnetic field at certain locations and points in time, then sets their instruments and other navigational aids at these points,” Chulliat says.

The NOAA NCEI team provides its customers with the WMM and associated software that they can download and use, embed in other systems, or use to write software of their own. There’s also an online magnetic field calculator into which a user can enter a set of coordinates to get a precise magnetic field value for that location.

A modern electronic compass helps us understand fields not in our vision. Our High Definition Geomagnetic Model (HDGM) provides

The Science, Beauty, and Mystery of Auroras

A geomagnetic storm lies behind every inspiring aurora in our skies. The mystery behind these shimmering curtains of neon-like

Navigating Our Planet with Magnetic Models