In 1992, the storm became the most destructive of its time 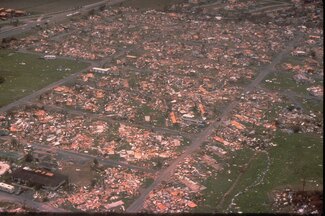 In the rearview mirror, life-changing events can look a little different. An extreme weather event survived by a young Anthony Arguez later altered his life in a positive way. Despite the devastation, Hurricane Andrew’s landfall in the summer of 1992 sent him on a new path that led to NOAA.

Prior to Hurricane Andrew, Arguez didn’t have a significant interest in weather or science for that matter. That changed when the storm hit the Miami area when he was 14 and living with his family in the South Miami Heights neighborhood, just seven miles north of where the center of Andrew’s eye made landfall. “It was during summer and I was eager to begin ninth grade at my junior high, and the school year was delayed due to the storm,” said Arguez. To avoid his family’s frenzied hurricane preparations, Arguez went to ride out the storm with his older siblings in the nearby Country Walk neighborhood, an area infamous for the extreme destruction Andrew’s violent winds wreaked there. “There was a loud rumbling and whistling noise as if a freight train were barreling toward us,” recalls Arguez. 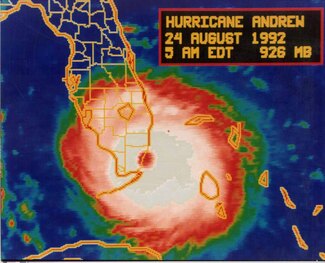 Arguez’s family home was totaled by Hurricane Andrew, a tough blow for a family that had few financial resources even before the storm arrived, though their home was insured. Arguez remembers, “After the storm hit, life just stood still for a few weeks. The Red Cross and many other organizations brought food into our neighborhood so we never went hungry. The Goodyear Blimp flew overhead providing information on where to get food and clothing.”

The impacts suffered were not just physical or financial, however. “The biggest emotional impact to me due to the storm was the death of my childhood dog. Hurricane Andrew damaged most of the chain link fences in my neighborhood, so many dogs roamed free and my dog died as a result of this.” Arguez also recalls the strong sense of community and solidarity after the storm, as well as one particular Good Samaritan who drove from Tampa to hand out food in his neighborhood, a particularly touching memory that inspires him to this day.

Total monetary losses in Hurricane Andrew are estimated at $55.9 billion (2022 CPI-adjusted estimated cost). To this day, Andrew remains one of just a handful of category 5 hurricanes to impact the U.S. mainland, and is ranked as the seventh-most costly hurricane to hit the U.S. Over 60 lives were lost as a direct result of Hurricane Andrew.

After living through the event, Arguez considers Andrew a crossroads in his professional path. “Hurricane Andrew was absolutely a turning point in my life overall but also my academic preparation. It encouraged me to pursue as many science courses as possible in high school, at which time I told my teachers I planned to study Meteorology.”

He went on to pursue undergraduate and graduate degrees in Meteorology, culminating in his earning a PhD in Meteorology from Florida State University. Now a climate scientist and statistician for NCEI, Arguez has completed research on numerous climate-related topics, including the creation of a “temperature score” to help describe our warming climate and understand global temperature trends. His research has made significant contributions to the weather and climate field, motivated in large part by the destruction he witnessed at the hands of Hurricane Andrew 30 years ago.

On This Day: Hurricane Andrew Makes Landfall
National Hurricane Center Report on Hurricane Andrew
Keeping Score: When Temperature Records are the Expectation
Should We Expect Each Year in the Next Decade (2019–28) to Be Ranked among the Top 10 Warmest Years Globally?

A Scale for Hurricane Rainfall Magnitude

Besides deadly winds and battering waves, hurricanes can exhibit another devastating trait: intense rainfall. A group of

In the rearview mirror, life-changing events can look a little different. An extreme weather event survived by a young Anthony

A Warming Earth is Also a Wetter Earth

A common misconception about climate change is that a warmer Earth will be a drier Earth. In fact, many parts of the world will

Tropical cyclones are one of the most dangerous weather events on Earth, but at their core lies a paradox—an area of clear skies