An Inventory of Tropical Cyclone Tracks

“Tropical cyclone” is the term for a low-pressure storm system that forms in tropical latitudes on either side of the Equator. Cyclones are characterized by thunderstorms, large waves, and powerful winds that rotate around a center of upwelling air. Born over large bodies of warm water, these spiraling storms require a complex combination of atmospheric conditions to increase in size and intensity. When cyclones move over land, they can cause profound loss of life and billions of dollars in damage.

Given the significant impacts of landfalling cyclones, much research has gone into understanding these tremendous forces of nature. NCEI scientists collaborate with international tropical cyclone forecast agencies and scientific institutes around the world to assemble and maintain the International Best Track Archive for Climate Stewardship (IBTrACS), a global inventory of tropical cyclones. The database was first made available in late 2008. 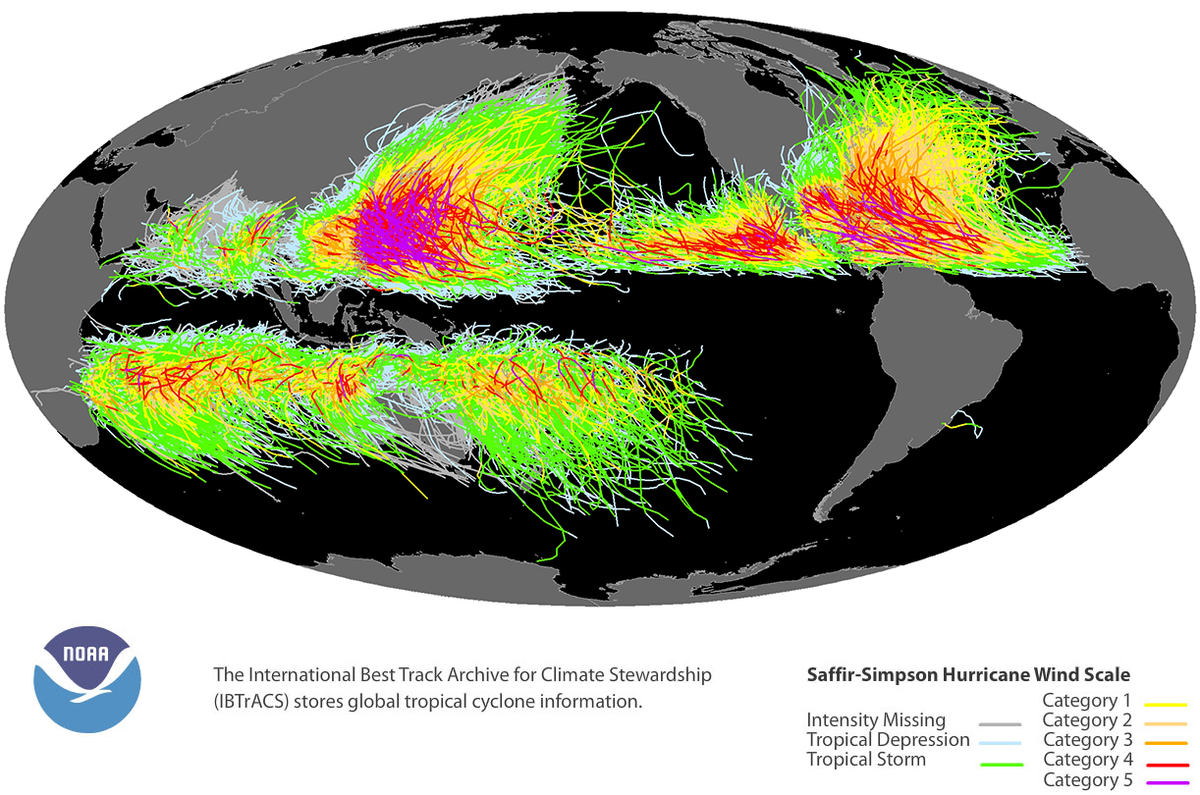 IBTrACS stores information for all known tropical cyclones recorded since the 1850s. In the 19th century, mariners who encountered tropical cyclones recorded the storms’ locations in ships’ logbooks. The only storms recorded during that century were those that struck inhabited land or were noted in surviving logbooks. Today, virtually no storm goes undetected owing to the nearly continuous satellite coverage of our entire planet.

The tropical cyclones stored in the IBTrACS database can be are classified according to the U.S. Saffir–Simpson Hurricane Wind Scale, which categorizes cyclones based on their wind speed. Depending on speed, cyclones can be classified as tropical depressions, tropical storms, or hurricanes. In the Atlantic and Eastern Pacific Ocean Basins, cyclones with wind speeds of 74 miles per hour or greater are called hurricanes.

Different regions of the world have other ways of classifying the severity of these storms. In the Northwest Pacific Ocean, cyclones with wind speeds of 74 miles per hour or greater are known as typhoons. In the North Indian Ocean, these cyclones are known as severe cyclonic storms.

Community planners, coastal managers, and others use the IBTrACS database to analyze past cyclones and predict future risk. In the private sector, reinsurance companies use IBTrACS to understand the risks of hurricanes for those that they insure.

Reinsurers—who step in to help pay claims made on insurance companies during catastrophes—run scenarios to create a variety of catastrophe models, also called CAT models. CAT models are computer-generated simulations of specific risks associated with natural or man-made disasters. Reinsurance companies use them to determine pricing for policies. In short, IBTrACS helps put a price on risk.

The catastrophe models are also used after events to determine, or validate, occurrences of disaster. According to our billion-dollar disasters data, 35 tropical cyclone events contributed to losses exceeding $1 billion each across the United States from 1980 through April 2017. With IBTrACS, insurers are able to respond more quickly to communities, industries, and individuals affected by disaster.

Additionally, climate scientists use IBTrACS data to study changes in the distribution, frequency, and intensity of cyclones over time. These studies help us understand the role that different climate factors have played on cyclones in the past. They also help us investigate whether climate change is likely to affect the long-term frequency and severity of tropical cyclones in the future.

Reporting on the State of the Climate in 2017

NCEI has released the first-of-its-kind global microplastics database. This database collates microplastic data from across the