What is a Climatology?

According to the World Meteorological Organization, the term “climatology” defines long-term averages of a given variable, usually temperature, over various time periods. In oceanography, the term “ocean climate” is used to define ocean parameters averaged over a decade or longer.

A monthly decadal ocean climatology, for example, will provide a value for each month averaged over the selected decade. Ocean climatologies, global or regional, relate specifically to long-term averaged oceanic parameters, for example, temperature, salinity, oxygen, etc., in the entire World Ocean or in selected ocean regions.

To provide an improved oceanographic foundation and reference for multidisciplinary studies, NCEI developed two new sets of high-resolution, quality-controlled, long-term annual, seasonal, and monthly mean temperature and salinity fields at varying depth levels for the NNP and NEP. These new climatologies are subsets of the World Ocean Atlas based on the World Ocean Database archive of temperature and salinity observations spanning more than a hundred years, and they incorporate a great deal of new data not previously available.

The NEP is a very important region in the North Pacific Ocean. The NEP is home to the California Current System (CCS), which is one of the most productive ecosystems in the ocean. 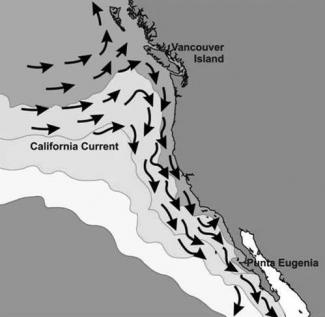 A visual representation of the California Current System (CCS). Courtesy of NOAA

The California Current flows southward along the western coast of North America, beginning off southern British Columbia and ending off the southern Baja California Peninsula. The CCS is characterized by intense coastal upwelling that brings cold, nutrient rich water from the depths of the ocean to the surface. This, along with oxygen and energy from the sun, promotes the growth of phytoplankton serving as the base of the marine food chain supporting an amazing diversity of marine life, including invertebrates, fish, birds, and mammals.

Ocean current systems, like the CCS, are part of a global system of heat transport from the equator to the poles. This transfer of heat maintains global climate, local weather patterns, and living conditions for life on Earth. The changes in heat storage and redistribution within the ocean directly impacts Earth’s climate and climate change. Diagnosing ocean climate change has tremendous benefits facilitating an understanding of long-term ocean variability, thus allowing better response and mitigation of hazardous material spills, more effective protection and conservation of marine ecosystems, more accurate weather forecasting, and improved climate change predictions.

With 5 of the 10 busiest ports in the United States located along the NEP and NNP regions, the data from these climatologies are immensely important.

Commercial and recreational fishing are major economic contributors to hundreds of coastal communities and cities in the North Pacific Region. Tourism activities and recreation are also economic booms, as the region contains some of the most popular vacation destinations in North America.

Biologically, over a thousand species of fish are reported along the Pacific Coast of North America, and the North Pacific Region in particular is known for its wide variety of marine mammals.

With a complex and diverse socio-ecological system, the study of the CCS is vital to the economic and environmental well-being of the North Pacific Coast. The NEP and NNP regional climatologies provide the data and mapping necessary to investigate the social, economic, and ecological impacts of the CCS. 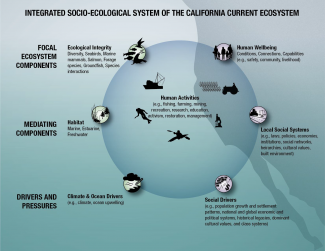 The California Current Integrated Ecosystem Assessment goals are to better understand the web of interactions that drive patterns and trends of components within the CCS. Courtesy of NOAA

According to the March 30, 2021, U.S. Drought Monitor, moderate to exceptional drought covers 36.7% of the United States

As we head further into the Northern Hemisphere’s spring, many people across the country are ready to put winter—and its cold

Assessing the U.S. Climate in August 2018

For August, the average contiguous U.S. temperature was 73.6°F, 1.5°F above the 20th century average and the 17th warmest on