Brian Meyer’s journey to NOAA began on the sandy shores of Lake Michigan when he was in high school. After testing out of his school’s earth science requirement, he decided to take the course in summer school instead—he hated the idea of missing out on an interesting subject. The course mainly consisted of field trips, where he was able to see science in action.

“We went down to the beach, and you could see how the waves were carrying the sediment and how the sand dunes were forming. It was just so cool,” Brian reminisces.

Those early experiences were formative in Brian’s education and career choices. Today, Brian is an associate scientist and trackline data manager at NCEI with the Cooperative Institute for Research in Environmental Sciences (CIRES).

What is a trackline data manager?

Brian works within the NCEI Geomagnetism group where he studies how the magnetic field is affected by minerals in Earth’s crust. Specifically, he determines how the geographic distribution of those minerals affects navigation.

“On a daily basis my job is to ingest geomagnetic data from airplanes and ships primarily,” Brian says. He puts all that data into a common format, maintains quality control standards, and archives them with documentation so users can understand how the data were collected and what corrections were made. At the end of that process, he puts the data together in a compilation called EMAG, the Earth Magnetic Anomaly Grid.

EMAG is a collection of magnetic measurements and anomalies. Magnetic anomalies result from geologic features enhancing or depressing the local magnetic field. EMAG is used for resource exploration, navigation where GPS is unavailable, and for studying the evolution of the lithosphere.

What makes EMAG really interesting is that it shows the fundamental evidence for plate tectonics. Plate tectonics is a relatively young science—the theory is only around 50 years old.

“It’s always cool to work with the science that’s been so fundamental in studying our Earth,”  Brian says. “The data I work with go back 50 years, back to those original surveys. Part of the difficulty of my job is putting together these disparate datasets. Some are really old, like before GPS, so the navigation is really bad, but it’s the only data we have in that area, so we have to use it. And then we have the new data, which are just huge datasets and really accurate surveys, so that’s always a difficult part of the job.”

How did you end up working at NCEI?

From his humble start as a curious teenager in his summer earth science course, Brian pursued a degree in geology at the University of Colorado–Boulder. During his senior year of college, Brian applied for an internship at NCEI’s Boulder location.

“I applied for a data manager assistant position. That ended up becoming a gopher position where I worked with all sorts of different data managers and IT people and just learned things,” Brian says. By the time Brian’s internship was ending and he was graduating, a permanent position opened in NCEI’s geomagnetic team. Brian got the job.

“I kind of lucked into it,” Brian chuckles “I know it’s a weird story to tell, but it’s part of the benefits of having internships—creating those networks that are so important. I was just so lucky that it happened really quickly for me.” 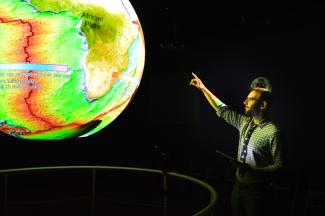 The data Brian works with can be visualized on the Science on a Sphere globe. Courtesy of NOAA NCEI, Katie Palubicki.

For those interested in a career in the earth sciences field, Brian recommends having a background in basic earth science skills, programming, and information sleuthing.

“Even more important than programming would be the ability to find information,” advises Brian. “Not actually having the information on hand but knowing how to find it or where to find it. Flexing those Google muscles.”

But Brian’s career trajectory hasn’t always been smooth. “I’ve had to deal with social anxiety. It’s a weird topic to talk about but you have to be able to talk to people and explain your science, to reach out and ask questions, and to go conferences where you might not know anyone,” he says.

“I would say to younger kids to definitely go to office hours, go to the colloquiums, be awkward, ask questions, no one’s going to laugh at you. Then you’ll find, over time, someone’s going to say ‘That’s a good question. I hadn’t thought of that,’ and that’s when you’re going to realize your potential.”

With a laugh, Brian concludes, “Especially scientists, we’re all kind of inherently nerdy people, so we like to stick to ourselves, but you learn that’s not going to work to build a career.”

Stay tuned for the next edition of Inside NCEI to learn more about our dedicated staff.

John LaRocque is not your stereotypical IT guy. With his cutting wit and personality to spare, it’s easy to understand why his