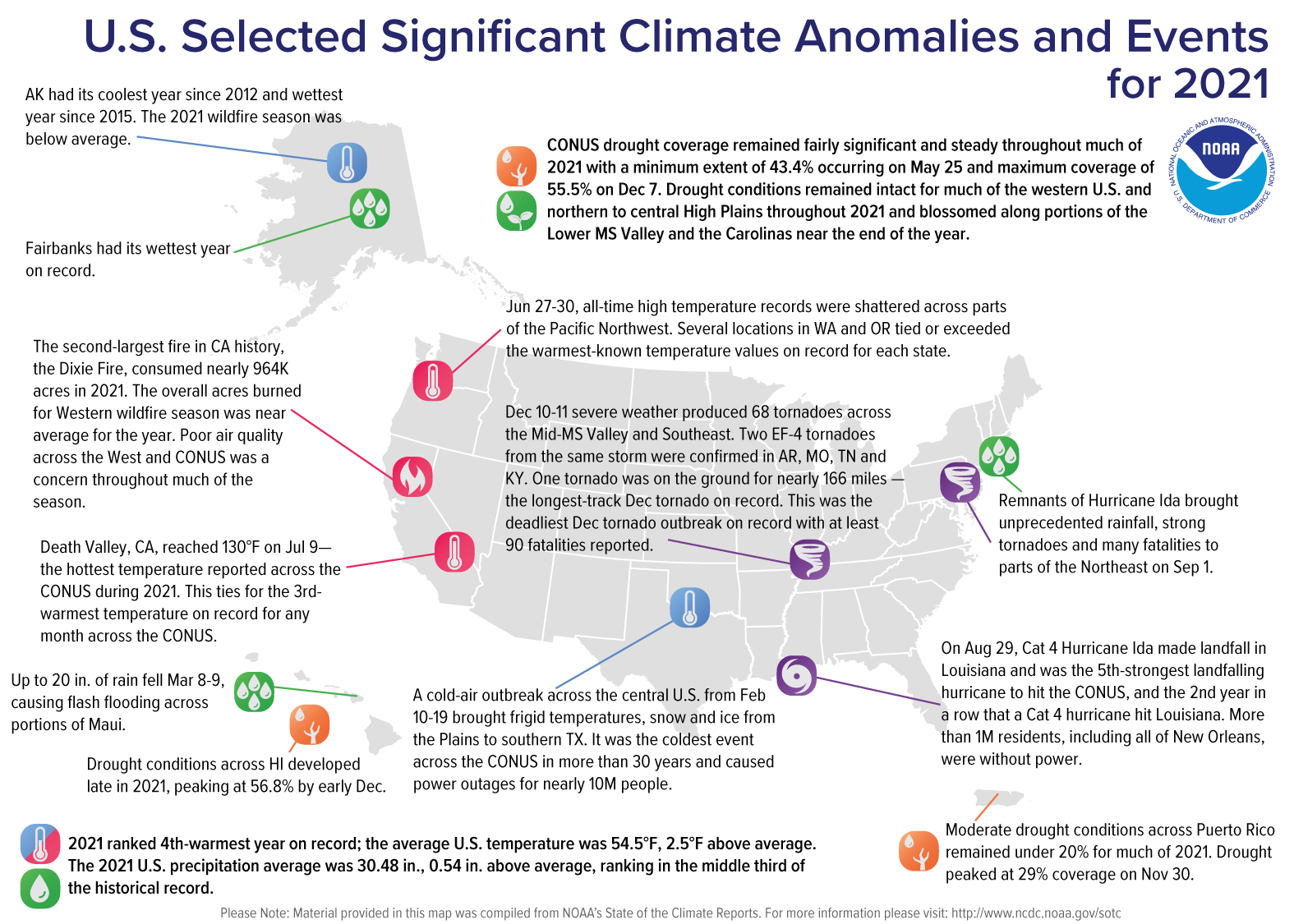 Issued 13 January 2022: Unless otherwise noted, temperature and precipitation rankings refer to a 127-year period of record (1895-2021), and long-term average refers to the 20th-century (1901-2000) value. Data for 2021 should be considered preliminary. The most up-to-date temperature and precipitation data is available through Climate at a Glance. 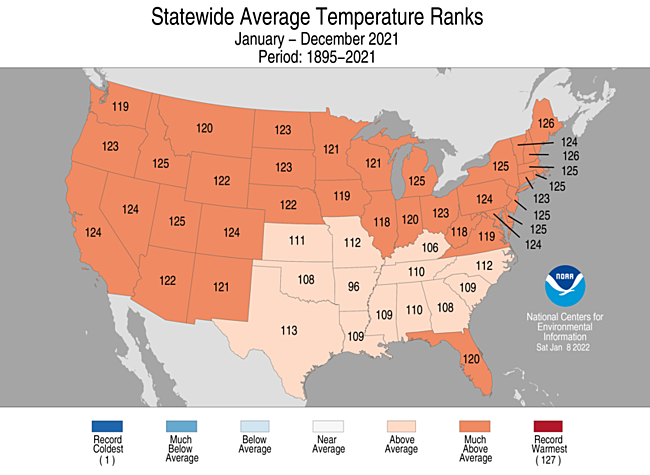 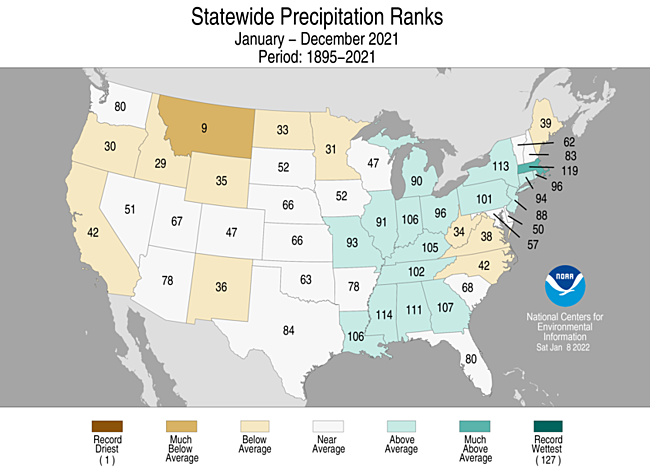 Based on preliminary analysis, the average annual temperature for the contiguous U.S. was 54.5°F, 2.5°F above the 20th-century average and ranked as the fourth-warmest year in the 127-year record. The six warmest years on record have all occurred since 2012.

Most of the contiguous U.S. experienced above-average temperatures during 2021. Maine and New Hampshire both had their second-warmest year on record with 19 additional states across the Northeast, Great Lakes, Plains and West experiencing a top-five year. Temperatures were near average for the year in pockets across the South and Gulf Coast states.

The nationally averaged maximum temperature (daytime highs) for 2021 was 66.4°F, 2.4°F above average, ranking as fifth warmest in the 127-year record. Temperatures were above average across most of the contiguous U.S. Near to below average temperatures were present in pockets from the southern Plains to the Southeast. Maine ranked second warmest for daytime high temperatures with 13 additional states across the West, Great Lakes and Northeast experiencing a top-five year.

Based on NOAA's Residential Energy Demand Temperature Index (REDTI), the contiguous U.S. temperature-related energy demand for 2021 was 31 percent of average and the 7th-lowest value in the 127-year period of record.

For the year, warm daily records outpaced cold records by a margin of more than two to one. There were nearly 106,000 daily temperature records tied or broken during 2021.

The contiguous U.S. average annual precipitation was 30.48 inches, which is 0.54 inches above the long-term average, ranking in the middle third of the historical record.

Despite near-normal precipitation at the national scale, 2021 witnessed several significant events at the regional scale, including an above-average monsoon season across the Southwest and several atmospheric river events along the Pacific Coast. Drought remained extensive across much of the western U.S. throughout 2021.

According to the U.S. Drought Monitor (USDM), drought coverage for the contiguous U.S. remained fairly significant and steady throughout much of 2021 with a minimum extent of 43.4% occurring on May 25 and maximum coverage of 55.5% on Dec 7. Drought conditions remained intact for much of the western U.S. and northern to central High Plains throughout 2021 and blossomed along portions of the Lower Mississippi Valley and the Carolinas near the end of the year. Extreme (D3) and exceptional (D4) drought covered about 26.8 percent of the CONUS on August 17 — the largest extent of D3 and D4 drought in USDM history. Hawaii’s moderate (D1) to exceptional drought extent grew rapidly during the summer months, peaking at 59 percent in July and was most intense in November and early December with extreme and exceptional drought at nearly 11 percent coverage. Mid-December precipitation nearly eliminated drought across the islands by the end of the year. Drought across Puerto Rico ebbed and flowed throughout the year, peaking in November with 29 percent coverage; Alaska was nearly drought free during most of 2021. 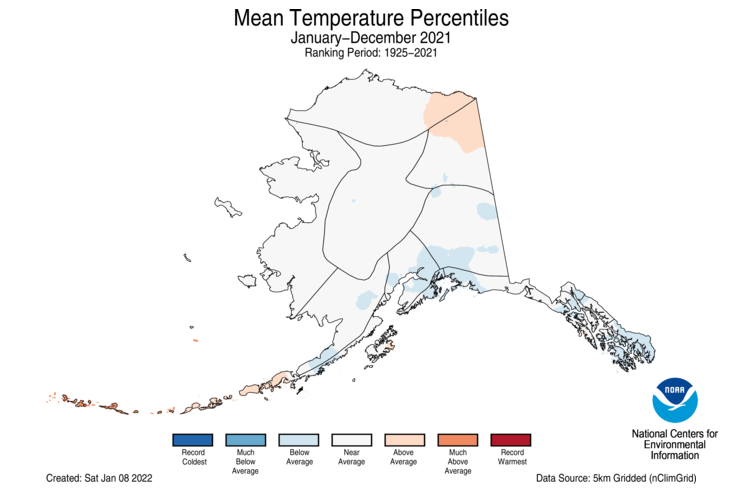 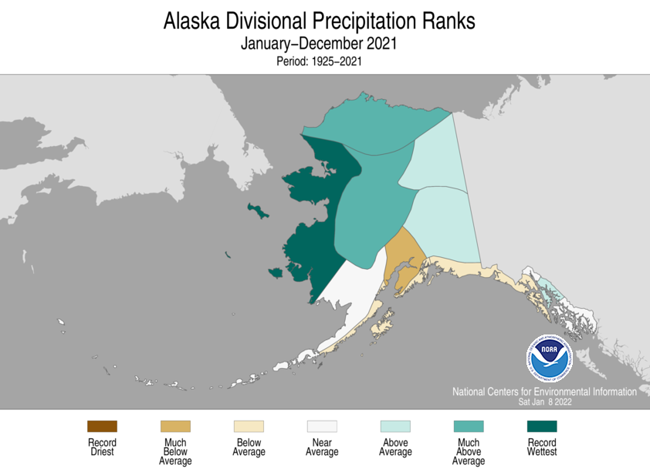 The Alaskan statewide average annual temperature was 26.4°F, 0.4°F above the long-term average and was the coldest year since 2012. It was also the second year in a row with near-average annual statewide temperatures in contrast to the pronounced warmth across the state during 2014-2019. Despite the relatively mild year, Kodiak Harbor reported a temperature of 67°F on December 26. This is the highest December temperature value on record for the entire state of Alaska, eclipsing the previous record of 65°F reported at Sitka Airport on December 12, 1944.

There were 20 separate billion-dollar weather and climate disasters in 2021, just two events shy of the record set in 2020. These events caused at least 688 fatalities and scores more injured.

2021 remained another dry year across the High Plains. The majority of the region experienced below normal precipitation for the year. While late winter and early spring started off wet in the region, that quickly changed as summer began and drought conditions started to expand and worsen throughout the remainder of the year. While only a couple of locations ranked in the top 10 wettest/driest for the year, many locations set new monthly records throughout 2021. Chadron, NE ranked the 5th driest year on record with 11.50 inches (292.1 mm) of precipitation recorded for the year. In contrast, Sisseton, SD had their 8th wettest year on record with a total of 28.98 inches (736.1 mm) of precipitation. Snowpack for the 2020-21 season was below normal for the region resulting in portions of the upper Missouri River Basin runoff being much lower than average. Snow Water Equivalent (SWE) peaked above Fort Reservoir at the end of March with 86 percent of the normal peak, while the reach between Fort Peck and Garrison Reservoirs peaked at the end of April at 96 percent of the normal peak. Both areas ended the season below average with Snow Water Equivalent (SWE) 80 percent of average above Fort Peck Reservoir and 65 percent of average between Fort Peck and Garrison reservoirs. As a result, as summer began, Basin runoff was 69 percent of average. As this year’s snow season (2021-2022) began, early-season snowpack across the region is below normal as a result of a warmer and drier start to the winter season. While it is still early in the 2021-2022 season, this can become a concern to farmers as they look to spring planting. The severe weather season in the region was less active for the year. In June, only four tornado warnings were issued across Kansas, which is well below the June average of 29 (based on data going back to 1986). At the end of peak severe weather season in July for the High Plains, every state aside from Colorado was 50 percent below their yearly total for tornadoes, according to the Storm Prediction Center. South Dakota and Nebraska both had their lowest number of severe weather warnings since 1995. Aside from this, there were some extreme severe weather events including an unusual December Derecho that moved across the plains causing damaging winds and tornadoes (see page 4 for details).
The following locations had notable precipitation records during 2021:

2021 was a year of extremes in the High Plains. January began the year with above normal temperatures across the region. Monthly temperature departures were as high as 15.0 degrees F (8.3 degrees C) above normal. This warmth led to drought expansion in the Dakotas which is abnormal to see in winter. Historic cold gripped the region in February as bitter cold persisted for 1-2 weeks, which made this event particularly impressive due to its longevity. Avalanche danger was extremely high in the Rockies throughout the winter as early season snowfall was weakened by dry conditions. The Southern portion of the region experienced an extremely wet early spring with above normal precipitation. The heavy precipitation recharged soil moisture and built snowpack in the mountains. Despite this heavy precipitation, flooding was limited in the region due to dry soil conditions. Drought conditions intensified and expanded throughout the spring and persisted through the remainder of the year. Drought conditions were most extreme in the Northern Plains where crops and rangelands were im¬pacted by the lack of moisture and heat. Over 80 percent of pastures and rangeland in the Dakotas were in poor to very poor conditions by the end of the summer. Poor forage, low stock ponds, and pests led to increased cattle sales across the region. The dry conditions and heat impacted crops and led to early maturation and harvest. Pollinators and wildlife were also impacted as a result of drought conditions. Dwindling beehives led to a decrease in the Dakotas honey production this year. Fawn survival rates were lower than average with a lack of forage and some fish populations decreased from low river levels. As 2021 came to an end, 65 percent of the region in D1-D3 conditions, and 88 percent of the region remained in abnormally dry (D0) conditions.